Behind the Garden Gates 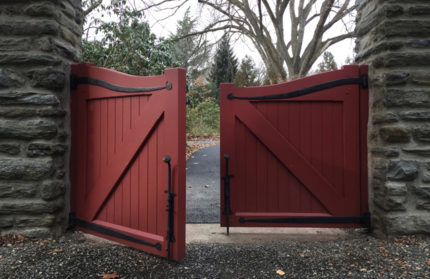 Stoneleigh has been many things to many people throughout the years: working farm, country retreat, palette for notable landscape architects, and home to three generations of the Haas family. This past Mother’s Day, Stoneleigh began its next chapter as a public garden open to all. Here’s a peek behind the garden gates…

At the Heart of Stoneleigh

The elegant, Tudor Revival-style house at the center of the property was constructed in 1900 and replaced an earlier residence that had been built by former owner Edmund Smith. Smith called his estate Stoneleigh, a name that has been retained by each successive owner.

The gardens around the house include a myriad of native plants used in unexpected ways. Said Stoneleigh Director Ethan Kauffman, “In designing the Main House gardens, we wanted to complement this grand, elegant structure with a mix of formal-style beds filled with native plants. Most of us think of native plants as looking somewhat messy or informal, so we’re excited to showcase more refined species and techniques.”

Certain design principles and horticultural practices—shearing, symmetry, uniformity, repetition, balance, verticality—lend a formality to the landscape. Additionally, Ethan and his team have used native alternatives to non-native formal stalwarts such as inkberry instead of boxwood, Virginia rose for rose hybrids, and smooth hydrangea rather than mophead varieties. 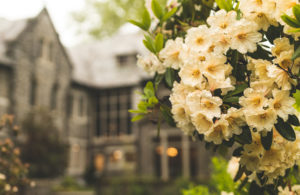 Moving down the path from the Main House, visitors enter a sheltered space that once held an in-ground pool installed by the Haases in the late 1960s. In his memoirs, John Haas noted, “We measured the height of (youngest son) Duncan’s chin and that became the depth of the shallow end of the pool.”

The shape of the flagstone patio, which Natural Lands installed as a more practical replacement, is a subtle nod to the swimming pool. So too are the bog gardens set within the flagstones.

A bog is a type of wetland with acidic soil that is low in nutrients. Native species, like the pitcher plants and sundews planted in Stoneleigh’s bogs, have adapted to these difficult growing conditions by trapping insects and absorbing their minerals.

Just beyond the Pool House is one of four roofed gates on the property. This style—known as a lych gate—was once a prominent feature of English churchyards. Translated from Old English, the word “lych” means corpse.

In the Middle Ages before mortuaries, the dead were taken to the lych gate where they remained for several days and guarded against body snatchers until the funeral service. The lych gate sheltered the body and the vigil watchers from inclement weather.

After wedding ceremonies, children would wait by the closed lych gate and playfully demand a ransom—usually paid in sweets—from the newly wedded couple. Once paid, the gates were opened.

The lych gates at Stoneleigh are examples of romantic “follies” that became popular in 18th century English and French gardens, and later emulated by Americans.

The gate leads to a sheltered part of the garden known as the Rockery, where dogwoods and arborvitae were left to grow into twisting, soaring specimens that barely resemble the clipped and pruned cousins in our own yards and gardens. Said Stoneleigh Director Ethan Kauffman, “One of the best things the Haases did at Stoneleigh was to exercise restraint in pruning. The untamed character of these one-of-a-kind specimens is one of my favorite aspects of the garden.”

At the turn of the 20th century, then-owner Samuel Bodine hired George F. Pentecost and Ferruccio Vitale to design a series of Beaux Arts-style gardens at Stoneleigh. This formal, neoclassical style of architecture had gained popularity in America following the 1893 Chicago World’s Fair. A remnant of the designs from this time is the Circle Garden, originally built as a sunken “knot garden” of flowering plants surrounded by oak trees.

After nearly eight years of work by Pentecost and Vitale, Samuel Bodine hired the prestigious Olmsted Brothers, sons of famed Frederick Law Olmsted who is considered to be the father of American landscape architecture. Olmstead Brothers replaced much of the architectural geometry at Stoneleigh with more informal designs, giving the estate a more naturalistic, park-like appearance.

Over 50 years, Olmsted Brothers prepared 237 drawings for the grounds, making Stoneleigh the best-documented property in the firm’s history. Of the more than 80 projects Olmsted Brothers undertook in the Philadelphia region, few survive beyond trace remnants. Stoneleigh’s gardens have remained remarkably intact.

A visit to Stoneleigh is not complete without a stop along County Line Road at the chainsaw art sculpture commissioned by John and Chara Haas in 2002. The playful carving depicts the family members: two large rabbits—mom and dad—and five baby bunnies representing the five Haas children. (Haas means “hare” in German.)

For many years, the Haases dressed up the rabbits for holidays, graduations and sporting events. When John and Chara Haas passed away in 2001 and 2002, respectively, the hares wore angel wings and neighbors left flowers at the base of the sculpture.

Exposure to the elements eventually took a toll on the sculpture, so when Natural Lands assumed ownership of the property, restoring the rabbits was a priority. The original artist, Marty Long, was hired to carve a replica sculpture from a massive white oak stump. An annual coating of varnish will help preserve the rabbits so that they can look over Stoneleigh for many years to come.

Make a date with nature at Stoneleigh. Stoneleigh: a Natural Garden is open Tuesday through Sunday, 10 to 5. As part of Natural Lands’ mission to connect people to the outdoors, the garden is free of charge for everyone. Learn more at StoneleighGarden.org. 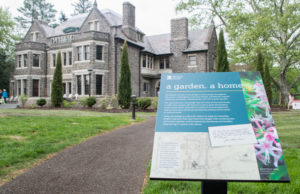 Just days before Stoneleigh’s opening in May, Natural Lands faced a fight to save the property. The Lower Merion School Board announced its intention to seize the historic gardens and buildings by eminent domain for construction of a sports complex and middle school.

In response, Natural Lands launched the #SaveStoneleigh campaign. Support from the community—parents, students, residents and beyond—has been overwhelming. More than 33,000 people signed a petition urging the School District to leave Stoneleigh alone.

In June, the Pennsylvania legislature passed with bipartisan support House Bill 2468, an effort Natural Lands championed. The new law requires court approval before any entity—like Lower Merion School District—can seize a property preserved by a conservation easement. However, the School District has yet to formally retract their interest in condemning Stoneleigh.

Tagged under: Public Garden, Stoneleigh
Related Articles:
back to top