Team Success is Spread Around Our Independent Schools 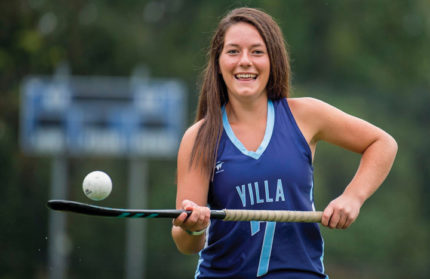 But a few other teams—Baldwin School soccer, Bishop Shanahan girls’ soccer and volleyball, and Padua volleyball and field hockey team, for example—fought valiantly to the semi-finals or finals, but left their dreams on the field. 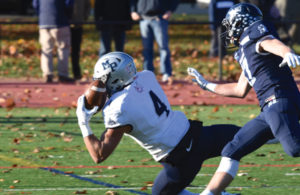 At the end of the season, Malvern Prep was undefeated at 11-0 and won the Inter-Ac League (independent schools in the Philadelphia area). Kurt Ruch, Director of Athletics, declared the season “fantastic” and credited Coach Dave Gueriera, his assistant coaches, players and families for doing a “wonderful job.”

The varsity soccer team at the Haverford School won the Inter-Ac League and was ranked #12 in the Commonwealth, ending the season at 13-2-4, with goals scored by 12 different players. Inter-Ac MVP Griffin Wada will play at the University of Chicago next year. The team’s striker, Will Micheletti, with 12 goals and 11 assists, was selected as All-Inter-Ac 1st team and heads to Franklin & Marshall. Midfielder Nick Pippis earned 2nd team All-Inter-Ac honors and will move down the street to Haverford College.

Finishing 3rd in the Inter-Ac League, Episcopal Academy was 13-4-3 in boys’ soccer. Coach David Knox named three players who were “crucial” to the team, calling them “a special group of players who are really tight with each other [with] a tremendous work ethic and will to win.”

EA midfielder Harrison Malone, with 11 assists and 5 goals, is still deciding on a college. The Churchmen’s striker, Samuel Wilson, scored 20 goals and will be playing at Colby College next year. Goalkeeper Trevor Manion, a junior who gave up only 16 goals in 19 games this season, has been heavily recruited by many top Division 1 programs.

For the 7th straight year, the Delaware championship was won by Salesianum School, finishing the season 13-2. The team was ranked #1 in Delaware and #9 in the nation. Coach Scott Mosier calls the team “a positive, hard-working group [with] high aspirations.”

Center-back Tommy McGrail, whom Coach Mosier called “the most complete” player at the school, was named Player-of-the-Year, All-American, #1 player in the state and 1st team All-State. Jack Leonard at center-mid was “gifted with fitness, quickness and speed [though] incredibly technical on the ball …. His ability to create in the attacking third is truly special,” said Coach Mosier. Both players have committed to the University of Delaware. 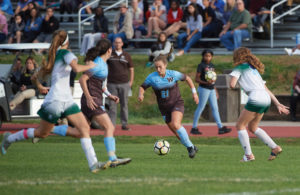 Finishing 14-3-3, Bishop Shanahan High School’s girls’ varsity soccer team made it to the District semi-finals. Ally Waite was selected to the 1st team of the All-Ches-Mont league. She was runner-up for the league’s Player of the Year, concluding the season with 9 goals and 10 assists. Next year, she’ll play at Misericordia. Shanahan’s leading scorer, junior Alaina McLaughlin, scored 17 goals for the season and was also named to 1st team All-Ches-Mont. Mary Byerley ended the season with 8 goals and will play next year for Temple University.

In a “heart breaker,” the Westtown School girls’ varsity soccer team, with a 9-0 record in the Friends School League and 13-1-1 overall, lost 1-0 to the Baldwin School in the Independent School State quarter-finals (PAISSA). For the season, the Westttown team scored 44 goals, allowing only 6 against. Natalie Neuman, the team’s 4-year starting goalie, had ten shutouts. Sara Oswald, its all-time leading scorer, finished with 81 career goals. The two seniors have both committed to Lafayette College.

Although the Baldwin School won the Independent School semi-final, it lost in the final round. Gia Vicari, the school’s all-time leader in goals and assists, was selected to play in the High School All-American game and has committed to Georgetown.

Coach Katie Evans’ Villa Maria Hurricanes finished 18-3 overall and 12-0 in the Catholic Academies conference. They are sending two on their team—Hannah Miller and Mary Harkins—to Duke. Miller, a forward, landed 46 goals and 21 assists, while Harkins, at midfield and defense, had 16 goals and 11 assists. Midfielder Adele Iacabucci, with 17 goals and 13 assists, is headed for the University of Virginia.

In Delaware, Padua Academy had an outstanding season: 14-1, quite a run, losing only in the final of the state tournament. Midfielder Riley Hickox had 7 goals, 5 assists and was selected to the 1st team All-State. Selected to the 2nd team All-State were goalkeeper Shannon McCormac, with 17 saves; midfielder Anna Getty, with 6 goals; and forward Angela Taglione, with 7 goals and 10 assists. All have yet to decide on their college choice.

Ranked #4 in Delaware, Archmere Academy made it to the finals of the state tournament with a 19-2 season. Coach Mary Pat Kwoka declared it “an amazing season.” Julia Kochie made 1st team All-State and hit an average of .292, 3.6 digs and 3.8 kills per set. Lauren Edmiston made 2nd team All-State and hit .287.

The Westtown School boys finished 2nd at the Independent Schools championship, led by 9th grader Will Grady, finishing the course in 17:50. Their top 5 all finished the course in 18:37 or less.

On the girls’ side, the Academy of Notre Dame finished 2nd and Friends’ Central School finished 3rd at the Independent Schools championship. Notre Dame’s average speed for its top 5 runners was 21:32. Friends Central’s top 5 actually averaged a faster 21:15, led by Rebecca Wucinich, a junior.

All in all, a great season for the individual student athletes, the teams and the schools. We wish them well in college and beyond!

Tagged under: college sports, sports
Related Articles:
back to top