We Have an Announcement

Many Devon Horse Show fans may remember where they were on that sad Saturday in April when they learned the deeply disappointing news that the 125th Anniversary would be postponed and, for the second year in a row, this cherished rite of spring was cancelled. It was quite an announcement.

Yes, we could understand that this grand tradition, mixing equestrian excellence with family fun, requires substantial lead time to produce a world-class event. In fairness to the competitors, supporters, spectators, volunteers, vendors and others—plus the health and well-being of the entire community—the cancellation decision was determined to be the best option.

So, for 2021, we’ll keep calm and carry on with a virtual art show, a great new book and the beloved carriage marathon. 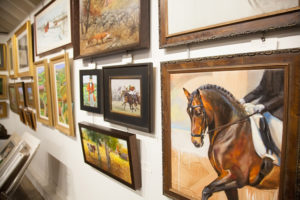 There won’t be the excitement of the usual First Night party, marking the beginning of another year of the Devon Horse Show and giving guests an in-person first look at the many works at the Art Gallery. The charming white cottage and temporary home of the Devon Art Gallery is usually a magnet for art lovers and those looking to take a break from the action in the ring.

Instead, a virtual Art Gallery will offer works of over 50 juried new and returning artists working in an array of styles. Expect art with horses and bucolic landscapes to figure prominently.

Tour the virtual gallery from May 27 through June 3. Early access is available during the traditional First Night time slot, May 26th at 6 p.m., for anyone wishing to become a sponsor (starting at $100). 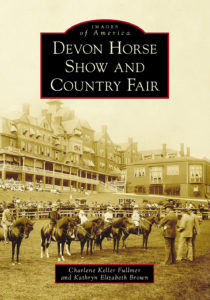 A new book was launched as part of the Horse Show’s 125th anniversary. The Images of America series published the Devon Horse Show and County Fair volume by Charlene Keller Fullmer and Kathryn Elizabeth Brown. Fittingly dedicated to the generations of volunteers who supported the event for over a century, the book depicts the his tory of this iconic community event.

Recapping the show’s growth from its humble beginnings in 1896, through the World Wars, to its rise as a premier international equestrian competition, the book captures the major milestones and high lights them with wonderful historic photos. From the Lead Line to the Grand Prix, with tiny tots and famous Olympians, the shear scale of the Devon Horse Show is something to behold.

Copies of the book are available for order at DevonHorseShow.net and at your favorite local independent bookstore. A great present for fans and supporters. 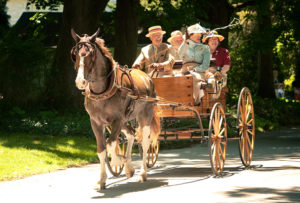 There will be a bit of Devon magic this year as the classic Carriage Marathon delights fans as it rolls through the usual Devon neighborhoods on Sunday, May 30th.
Spectators can enjoy the pageantry of horse-drawn carts and carriages making their way through 21st-century streets and be wisked back to another time.
You have time to make friends with someone lucky enough to live on the route. And maybe you’ll get invited to the picnic!

One thing we’ve learned again during the past year is that things change. So check the Devon Horse Show website and social media for updates, developments and news. Here’s hoping it’s all good!