People’s Light is thrilled to welcome audiences back to the theater for the 2021–22 Season. Performances continue in March with tour de force productions, a Tony Award nominee and music-filled world premieres.

“After nearly two years, we’re truly back with a lineup of dynamic, relevant and ambitious productions,” shares People’s Light Executive Artistic Director Abigail Adams. “The human spirit prevails throughout our 2021–22 Season. Each of these plays follows characters, real and imagined, as they emerge from darkness into light, from doubt into hope. We can’t wait to share their stories with you—and to be with you in person.”

In November 2021, People’s Light reopened its doors with a brand-new, full-scale adaptation of A Christmas Carol. Continuing the celebration of the return to in-person theater, the season continues with Personality: The Lloyd Price Musical—the world’s first stage production to celebrate the Rock & Roll Hall of Fame legend—helmed by acclaimed theater director Sheldon Epps (Broadway’s Play On! and Blues in the Night).

Then, after the pandemic halted its initial run two years ago, Jeanne Sakata’s Hold These Truths gets a second chance to shine a light on activist Gordon Hirabayashi (known for his resistance to the Japanese American internment during World War II). Later this spring, Resident Director Steve H. Broadnax III (and director of Thoughts of a Colored Man on Broadway) teams up with Tony Award- winner Jason Michael Webb (Choir Boy) to honor the eponymous Civil Rights icon, with a local connection, in the world premiere of Bayard Rustin Inside Ashland.

Summer brings two delightful comedies to wrap up the season. First up is Paul Osborn’s rarely produced The Vinegar Tree, which reunites many of the team from the wildly popular 2018 production of Morning’s at Seven. Later don’t miss Bess Wohl’s Grand Horizons, the hilarious family dramedy that garnered a 2020 Tony Award nomination for Best Play. 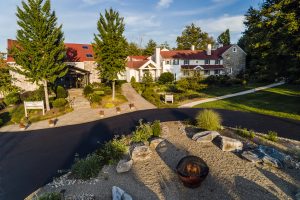 People’s Light strives to make visiting the theater as gratifying and memorable as always. Stop by the newly renovated on-site restaurant, The Fern & Fable, for a pre-theater meal.

Some other things may look a little different this year, as the theater follows local and national recommendations regarding COVID-19. Health and safety are first priorities in making all programmatic choices. Currently masks are required indoors for everyone who visits, regardless of vaccination status. All ticket holders must show proof of full vaccination or a recent negative PCR or antigen COVID test, along with a valid photo ID, for entry. Please visit the website for further details and updates.

Season 2021­–22 is a year of healing and revitalization for People’s Light, and the entire theater community is excited to launch into a new era with you.