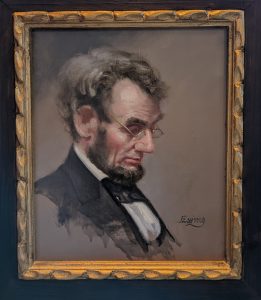 If the face of Helen of Troy launched a thousand ships, then it may be said that the words of Joseph J. Lewis launched 15 thousand biographies of Abraham Lincoln.

The fleet of Lincoln biographies set sail, so to speak, when the first, written by Lewis, was published on February 11, 1860 in the lower level of the historic Lincoln Building, now home to the Chester County Community Foundation.

The former publishing space, called The Lincoln Room, is now an interpretive site for events surrounding this first biography, a publication that is said to have helped launch Lincoln’s presidential campaign.

But that biography is not the only historic event connected to the 189-year-old structure. Here are a few other notable first-time accomplishments.

Today the Lincoln Room is the site of the Cultural Alliance of Chester County, an organization committed to elevating the arts, culture, and historic preservation sector. Various Lincoln and Civil War memorabilia are on display to educate visitors about the past.