Visit some of the top ten trees in Pennsylvania 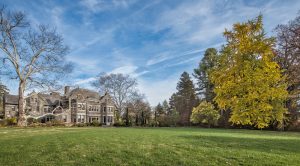 The magnificent trees at Stoneleigh: A Natural Garden, represent more than 150 years of landscape design and careful stewardship. Many of the largest trees at Stoneleigh—the public garden in Villanova owned by nonprofit Natural Lands—were planted more than a century ago by some of the most influential landscape architects of their day, including the Olmsted Brothers firm.

All of these beauties can photosynthesize, stabilize soil, capture carbon and clean our water, but those native to Eastern forests and grasslands best support the life around us. These native trees provide essential food and shelter for insects, which support vertebrates like birds and small mammals, which in turn helps build biodiversity in our communities (and beyond).
Several native specimens at Stoneleigh are among the largest of their kind in the state and make a visit to this celebration to the natural world even more inviting.

Native to southern Europe and western Asia, turkey oak is a large, deciduous tree in the white oak group. Its acorns, which have a shaggy cap that covers half the nut, give this tree its alternate common name: moss-cupped oak.
This particular tree at Stoneleigh is of special significance to the Haas family. It was transplanted by John and Chara Haas from their home in Haverford, where they lived before moving to Stoneleigh in 1964. 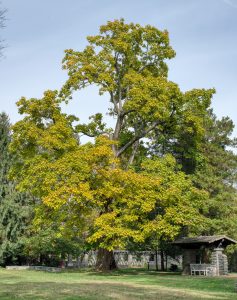 Southern catalpa is native to the Gulf Coast states but is now widely naturalized to much of the United States. Indigenous people called these trees “catawba,” meaning “winged head,” likely in reference to the winged seeds that emerge from the trees’ long bean-like pods.

The tree produces a bitter-tasting chemical compound that deters most herbivores. Yet the catalpa sphinx moth caterpillar not only tolerates these compounds, but thrives on them. In fact, the catalpa tree is the sole source of food for this species’ larvae. The caterpillars may defoliate a tree three times in one summer without killing it.

The Stoneleigh catalpa is the third largest of its kind in Pennsylvania, with a massive trunk measuring 204 inches around and a spread of 63 feet. The tree measures 82 feet tall, a remarkable height for a species that usually caps out at 40 feet! Its height is even more remarkable, considering the Stoneleigh tree lost a huge section of its main trunk in a storm decades ago. 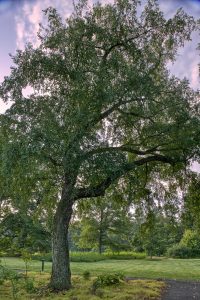 River birches have a special type of flower structure called a “catkin,” derived from the old Dutch word for kitten—the cylindrical flower clusters resemble a kitten’s tail. The native river birch is a host plant for Mourning Cloak and Dreamy Duskywing butterflies. In nature this tree is often found in moist soils but is widely adaptable.
The tree can be easily identified by its cinnamon-colored, exfoliated bark and is a great choice for home gardens. 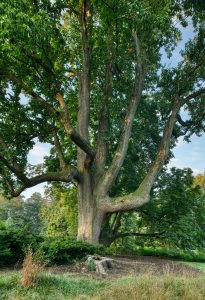 This tree, native to the eastern U.S., makes a great shade tree and is a fast grower. Sadly the flowers of this magnolia species are not showy. Its unripe fruits resemble small cucumbers—giving rise to its name—but ripen to a dark red color.
Native peoples were said to have used cucumber tree bark for toothache pain. Settlers combined extracts from the green fruit with whiskey for a fever medicine.

This graceful evergreen is the state tree of Pennsylvania. A long-lived tree, the oldest recorded specimen was more than 550 years old.

Hemlocks are susceptible to woolly adelgid, a tiny sap-sucking insect accidentally introduced from Asia in the 1920s. This pest has killed most of the old-growth hemlocks in the Great Smoky Mountains and Shenandoah National Park, and has greatly affected Eastern forests as well.

Because there are more than 140 hemlocks at Stoneleigh, the gardens are an excellent place to experience the character of a species once dominant in Appalachia. 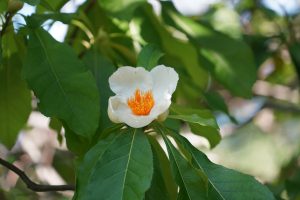 Stoneleigh is home to the fifth largest Franklin tree in Pennsylvania. In the summer, large, white flowers burst forth with a scent like honeysuckle. The story of Franklinia—somewhat of a horticultural mystery—is as intriguing as the tree is lovely.

Thick forests covered our land for millennia before European colonists began to document the unique species here. Two of these colonists, Philadelphia botanist John Bartram and his son William, encountered a “rare and elegant flowering shrub” in October of 1765, after losing their way during a botanical exploration of southeast Georgia. John served as Royal Botanist for King George III, a role that including traveling throughout the colonies to gather both seeds and living plant specimens.

The Bartrams took seeds and cuttings from these unusual trees and grew them back in their garden outside of Philadelphia, naming the species in honor of their friend Benjamin Franklin. Today, every single living Franklinia tree—an estimated 2,000 of them—can be traced back to those grown at Bartram’s Garden. That’s because the species has been extinct in the wild since 1803.

Scientists aren’t sure why the plant disappeared. Could it have been fire, flood or over-collection? One theory involves a soil fungus introduced with the cultivation of cotton.

Another mystery surrounding this plant is whether it’s native to the U.S. As the Franklin tree was only ever documented in that one location in southern Georgia, some people postulate it was an accidental introduction—as so many non-native species are—brought by the French in the 1600s or on a trading ship.

Franklinia has a reputation for being finicky. It needs rich, acidic, well-drained soil in full sun or light shade. It’s not pollution tolerant and is sensitive to root disturbance. But given the right conditions, it’s a spectacular addition to your garden.

Or simply visit the magnificent specimen at Stoneleigh, where the mystery lives on.

Natural Lands is dedicated to preserving and nurturing nature’s wonders while creating opportunities for joy and discovery in the outdoors. As the Greater Philadelphia region’s oldest and largest land conservation organization, member-supported Natural Lands has preserved more than 125,000 acres, including 43 nature preserves and one public garden totaling more than 23,000 acres. Nearly five million people live within five miles of land under the organization’s protection. Land for life, nature for all. NatLands.org.