There’s a remarkable species to be found at Stroud Water Research Center. While our sample size is small—only four observed so far—the subjects have a wide range of travel. They can be found anywhere between the laboratory and the field, so catching them requires skill and precision. Or at least an email chain to find out when they’ll next be in the office. This species is Scientist retiretus.

Tom Bott, Bern Sweeney, Lou Kaplan and Denis Newbold—all Ph.D.s—are among those using their retirement in order to continue to pursue their passions in freshwater science. The Stroud Center is fortunate to have these scientists available to drive its research agenda.

Here’s a bit of what these so-called “retired” scientists are up to in their encore careers.

Health of the Watershed 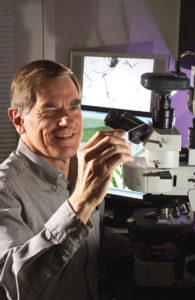 Joining the Stroud Center in 1969, Tom Bott spent the next 39 years pursuing freshwater science as a microbiologist. When Bott retired in 2008, he was a senior research scientist, head of the microbiology department, and vice president of the board.

Ten years after his retirement, he’s in his office working on a paper on the growth of algae, which can be affected by surrounding land use, in White Clay Creek over 40 years and how it relates to the health of the watershed. Retirement has given Bott the freedom to explore the backlog of interesting questions that built up during his previous research.

When he’s not at the lab working on these issues, Bott enjoys taking in many of our local cultural attractions, especially the Philadelphia Orchestra. And he’s also found time to improve his skill painting with watercolors. 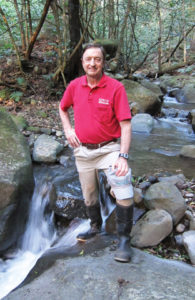 Bern Sweeney first came to the Stroud Center in 1972 as a graduate student and was later offered a post-doctoral researcher position. Over the years, he became a senior research scientist, and in 1988, the executive director. Although he officially retired in December 2017, he was right back in the office after the holidays.

Sweeney says, “Working while retired has allowed me to focus 100 percent of my effort on my research.” He’s currently looking at how and why climate change affects the distribution and health of aquatic insects, as well as how restoring streamside forests can help improve the quality of fresh water.

He hopes to continue publishing his work and helping younger scientists advance in their research.

Though Sweeney still comes into the office on most weekdays, generally his overall hours are reduced. This lighter schedule, he says, allows more time for his family and his hobbies, like golf and oil painting.

He admits his wife recently joked that he’s “flunking retirement, royally.” His reply, “That’s true, but I’m having a lot of fun!” 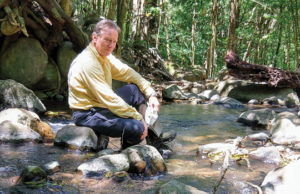 Arriving at the Stroud Center in 1977 to conduct his Ph.D. research, Lou Kaplan later joined the staff in 1981 after securing research funding from the National Science Foundation. Kaplan used the NSF funding to establish a laboratory that studies how streams affect how elements like carbon become more or less available as an energy source.

Since retiring last December, Kaplan has worked to make some of his long-term datasets more readily available to the public. One includes a 40-year record of over 11,000 measurements of organic carbon concentrations in the waters of White Clay Creek. He plans to submit the datasets to a publicly accessible archive of environmental data.

Kaplan also mentors younger scientists at the Stroud Center, orienting them to the research infrastructure and historical datasets produced during his career and providing his perspective on their research ideas. He continues working with three graduate students, helping them develop their writing skills on research papers.

Now Kaplan enjoys the freedom of his retirement to be more involved in managing a wildflower meadow and woodlands at his home. He’s spent the last three decades planting and nurturing this patch of nature, which includes several hundred native trees, some now over 50 feet tall.

Denis Newbold came to the Stroud Center in 1983 as a Ruth Patrick Scholar, and later became a research scientist, working for 28 years before his 2011 retirement. The Stroud Center’s outdoor experimental stream channels were Newbold’s creation.

He continues to use them to study how algae and bacteria that grow in streambeds help regulate water quality. This work could add to the research on whether restoring mussels to streams could improve water quality.

Newbold cites some of the benefits of retirement—removing the stress of publishing a certain number of papers or getting things done in a specific timeframe, along with giving him the freedom to focus entirely on his research and work at his own pace.

He’s also found time for doing some hands-on work that students or volunteers would have helped with. He says he “enjoys that in a big way because … a lot of the fun, the real rewards of doing science, is what the people that are actually in the field and in the lab are doing.”

Newbold has more time to be involved in a local Friends Meeting, play flute and piano, and serve on his township’s planning commission and on the boards of local environmental organizations.

Looking at the legacies and ongoing contributions of these Stroud Center scientists who demonstrate the multiple benefits to organizations, young scientists and themselves of “working while retired,” one thing is clear: science never retires.