Rare and Endangered Plants to Add to Your Home Landscape

Home gardeners can help protect our area's endangered plants, one pot at a time.

The phrase “endangered species” often comes with images of Giant Pandas, Bengal Tigers or Loggerhead Sea Turtles, and the scientists and advocates who work to protect them. With so much attention given to these large, lovable animal species, we often overlook the threatened plant species in our own communities, and the easy steps we can take to protect them in our own gardens.

Pennsylvania may not be home to any pandas, but our state is home to many unique native plants, some of which are at risk of extinction. There are thousands of unique plants that are an integral part of our region’s biodiversity and beauty. These plants support local insects and wildlife, while creating dynamic landscapes that are constantly inspiring. Sadly, human disturbance of their habitat, competition from aggressive non-native plants, and shifts in climate have left some populations of Pennsylvania’s plant species in serious danger.

Luckily, you don’t need to be a scientist or have special training to help protect these endangered plants. All you need to join the movement to help protect our rare plants is an interest in gardening and some space to add a few plants to your garden.

Many of these threatened plants are wonderful in a home landscape and can be found for sale at nurseries specializing in native plants. Adding some of these species to your home garden will help protect the ecological diversity of our region, increase the aesthetic appeal of your landscape, and give you a sense of pride as you play a role in saving threatened species.
Before considering which plants you may want to add to your garden, there are a few terms to understand.

There are three categories that describe our diminishing populations of native species of plants. If a plant is classified as endangered, the species is in danger of extinction throughout most or all of its native range. Being classified as rare means the species is uncommon due to its restricted habitat or low population in a region. An extirpated species is one that hasn’t been seen in recent years and is considered locally extinct.

Wildflowers, a Vine and a Cactus!

From vines to perennials to wildflowers and cacti, here are some native plants that will add a special dimension to your garden. For patio or balcony gardeners, many of these plants would also thrive in pots or other containers.

Found as far south as the state of Mississippi, Vasevine (Clematis viorna) is a Pennsylvania endangered species found growing primarily in wooded streambanks. It grows as a vine and will elegantly climb trellises, fences and trees in your yard. In spring and summer, this plant features bell-shaped, pink and purple flowers that attract hummingbirds and bees to your garden. The flowers mature to unique, feathery seed heads, providing visual interest during several seasons.

up a flowering stalk that holds the cluster of tubular, pink-purple flowers that attract pollinators. This plant will tolerate shade, but does best in sunny, wet environments and is typically found growing along wooded streambanks from Pennsylvania to Tennessee. This species is endangered, with small populations scattered throughout its native range. 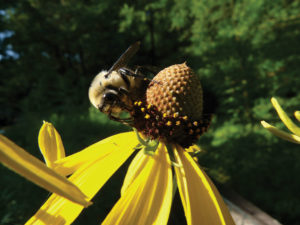 Prairie Coneflower (Ratibida pinnata) is a wildflower found in prairies in the eastern and central parts of the United States. It can grow to be five feet tall, with golden petals drooping down from a dark central cone. Its late season, long blooming period allows this coneflower to support many bees, butterflies and birds. Although it’s not endangered globally, this species is extirpated in Pennsylvania.

A hardy cactus that can thrive even in temperate climates, Prickly Pear Cactus (Opuntia

humifusa) prefers sunny, dry conditions and does best in rocky soil. It blooms in early summer, with a cheerful yellow flower above its spiny pads. The pollen attracts bees and, once fertilized, the flowers will mature to bear red fruits. Prickly Pear Cactus is endangered in parts of its range and is rare in Pennsylvania.

For gardeners looking to add height and structure to their landscape while helping to protect a species in danger, consider planting these trees and shrubs. 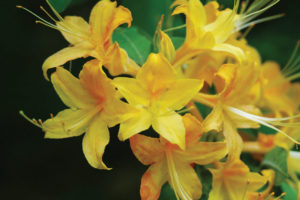 Flame Azalea (Rhododendron calendulaceum) is a deciduous shrub found growing in partly shaded, well-drained soils along the Appalachian Mountains. In spring, this azalea is decorated with upright yellow flower buds that resemble candle flames, providing its name. When the buds open, this azalea is set ablaze with orange-red flowers that attract butterflies. Flame Azalea is endangered in parts of its range and extirpated in Pennsylvania.

Providing multiple seasons of interest, Possumhaw Viburnum (Viburnum nudum) is a multi-stemmed, upright shrub, typically growing up to 12 feet tall. It has white lacy clusters of blooms in May and June, followed by pink fruits that deepen to blue or even a dark purple-black as they ripen, followed by vibrant fall foliage. This viburnum can be found in low-lying marshy areas from Connecticut south to Florida and is classified as endangered in Pennsylvania.

No garden is complete without a magnolia, and Sweetbay Magnolia (Magnolia virginiana) is 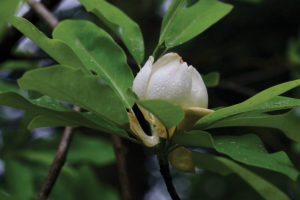 one of the most graceful magnolias available. Growing up to 30 feet tall, Sweetbay Magnolia is prized for its creamy-white, lemon-scented flowers that appear from June through September, followed by red seeds that attract a variety of wildlife. This multi-stemmed, semi-evergreen tree is tolerant of both drought and floods and will grow in part shade to full sun. Even though this magnolia is beautiful and easy to grow, it’s classified as a threatened plant in Pennsylvania.

Every garden bed or container is an opportunity to showcase native plants and help increase the biodiversity of our region. Incorporating plants that are rare and endangered in your landscape is an easy way to create stepping stones of habitat while adding unique colors and textures to your garden.

Even small plots of land or container gardens can support various species and bring lots of life to your home.

Jenkins Arboretum & Gardens is a 48-acre public garden showcasing native flora of the eastern U.S. and a world-class collection of rhododendron and azaleas. The gardens are free of admission and open every day of the year. 631 Berwyn Baptist Rd., Devon. JenkinsArboretum.org.

Heather Titanich is a Hamilton Educational Fellow at Jenkins Arboretum & Gardens, participating in a two-year program that provides training for the next generation of leaders in public horticulture.