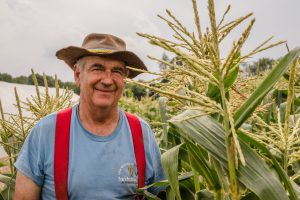 Pete Flynn, of Pete’s Produce in Westtown, is retiring. The land, 170 acres owned by the Westtown School, will be leased to another local farmer. The landmark Street Road store, which Pete built over 20 years ago, will go with the land. Plans for the land and store are evolving.

What is certain, however, is that Pete’s retirement will mark the end of an era. We’ll miss him.

Pete’s farming career began in 1986 on the site of what’s now Rustin High School. Originally a dairy farmer — he says he “took his pay in cows” — Pete sold his last cows in 1992 to focus on growing corn. In 1988, he planted an eighth of an acre of Silver Queen corn, selling ears from the back of his pickup truck. 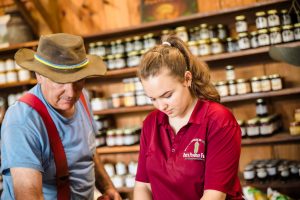 By 2000, the farming operation had grown, and Pete established his new farm at its current location on acreage owned by the Westtown School, building a welcoming farm store on Street Road. The school, he said, wanted its students to experience “more of a connection” to the land. Over the years, a “handful” of them did, working in the store or on the farm.

The store opens — I should say opened — each year in late April and will close for the last time in November. Besides corn and tomatoes, peaches in the summer and apples in the fall are the other fresh prizes I look forward to each year. And I do love his hot peppers. 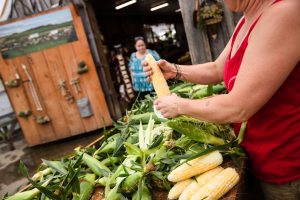 Over the years, Pete has grown and sold all kinds of produce: corn, tomatoes, eggplants, pumpkins, peppers, onions, garlic, kale, squash, beans, berries, watermelons, cantaloupes … It’s a very long list. The produce is mostly from his own farm, Pete says, but he’ll visit a couple of auction houses, one in Leola and another in Oxford, to fill the shelves and meet customer demand.

Through the years, Pete has been known mainly for his sweet fresh corn. Just-picked ears can be husked at tables in store — the husks are used for compost and feed for sheep. It’s a warm, communal feeling to shuck your dinner corn with other appreciative customers at the wood tables, knowing the husks will be put to good use. 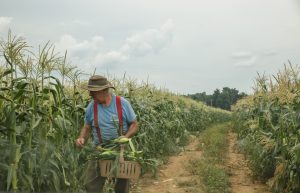 Pete credits a 2001 article by Rick Nichols, food critic at the Philadelphia Inquirer, with putting Pete’s Produce “on the map.” Starting with Silver Queen corn (the best of its time), he eventually grew Tender Super Sweet, also known as Mirai. As compared with earlier varieties, Mirai was “leaps and bounds better than any other corn on the market.” It was “super tender, super sweet and had a longer shelf life.” Mirai, according to Pete, doubled the sugar content — from 12% to 24% — of Silver Queen.

Tomatoes, on the other hand — especially heirloom varieties of all shapes, sizes and colors — grown largely from seed bought in the mail, brought in more money than corn. Grown in the “high tunnel” under light-transmitting plastic, the yield of #1 fruit (the top-quality tomatoes) was about 80%. That compares with about 50% for tomatoes grown in an open field. Pete rarely sprayed, describing the produce as “almost organic.” 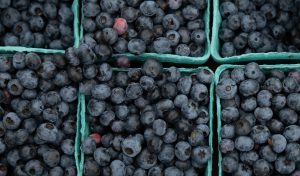 Another greenhouse-grown specialty is parthenocarpic cucumbers — meaning they’re not pollinated and don’t have seeds. Pete plants them early, in March, so they’re ready on the first day of the season. Very tender and unwaxed, these cukes must be shrink-wrapped for sale.

Pete’s also cultivated Doc Martin lima beans. Often growing to 12 feet or more, these heirloom beans are very large and delicious. Dr. Harold Martin, a dentist, was a resident of Chester County — on Street Road, in fact. People mail in for these specialty seeds, and Pete will sell them. He once sold 10,000 heirloom bean seeds for 15 cents per seed.

With the exception of the first year, the farm and store have always been profitable. Sales were up during the pandemic, Pete says, which he attributes to more people cooking at home. But from the start, the store was a hit. Sales, he says, “went gangbusters!” Even during the year a hail storm destroyed his crop mid-season, he made do with the help of other farmers. 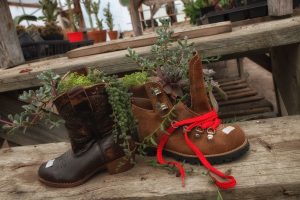 Not all of Pete’s interest in the farm, however, has been purely pecuniary. He says he “loves” farming. But his interests are also charitable. Five of his 170 acres or so are “gleaned” by Chester County’s Food Bank for their use. Its crew of around 20 people grow onions, cabbage, celery, kale and peppers, usually getting two crops in per year.

Pete’s own field crew consists of seven people who will be seeking employment elsewhere when the season ends. The store itself employs about 20. Danni Hayes Pinzone — the store manager who’s also functioned as Pete’s “social secretary” — will also pursue another path. She says it won’t be on the farm.

The Westtown School has valued its partnership with Pete for many years and wishes him the best. Seeking a new partner for the farm, the school distributed a request for proposals last spring for an experienced, community-minded farmer with retail experience. The response has been strong. As of mid-August, the school is considering several options.

After the current season ends this fall, Pete plans to travel for a while with his wife Amy, a cellist with the Immaculata Symphony. Meanwhile, his son Wesley attends college at Virginia Tech, while his daughter Melanie is a rising senior at the Westtown School.

For 35 years, farm work limited Pete’s travel to winters. In the near term, he’s bought an RV and looks forward to summer travel. In the long run, well … he doesn’t rule out farming.