New Life for the Ralston House

A historic restoration with a pragmatic purpose 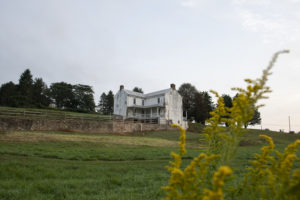 A visit to Bryn Coed Preserve is a picture postcard of the best of Chester County: rolling woodlands, meadows and farm fields stretch for miles. Bald Eagles ride the thermals in slow, graceful circles, and songbirds chatter in the trees.

This land has been inhabited for more than ten thousand years, originally by the Lenape and, more recently, by European settlers who found the county’s rich soil ideal for farming. As a result, the landscape’s natural beauty is complemented by picturesque farmhouses and barns.

When Natural Lands purchased Bryn Coed Farms in 2016 to save its 1,505 acres from significant development, the property contained 15 farmhouses, 13 barns, and 40 other outbuildings. All but one of these buildings have been sold as part of the conservation easement parcels that make up the Bryn Coed Conservation Community.

The remaining structure, the early 19th-century Ralston House, is within the boundaries of the 520-acre Bryn Coed Preserve and has sat unoccupied for several years.

Now, thanks to an extraordinary gift from long-time Natural Lands friend and supporter Penny Wilson, this historical farmhouse will undergo a complete restoration.

The house was constructed between 1800 and 1820 by Major Robert Ralston, a prosperous farmer and lawyer. It was one of the largest homes in the township and was built on the site of an earlier log house that appeared on tax rolls in 1798.

By today’s standards, the Ralston House is modest, just 1,950 square feet. But this home was part of a significant local trend towards building larger, costlier structures that began after the Callowhill Manor legal case in 1790.

Robert Ralston and his son John played instrumental roles as attorneys in this case against the descendants of William Penn, who still laid claim to the land. The decision allowed residents to obtain legal title to the farms they had worked as tenants for decades. 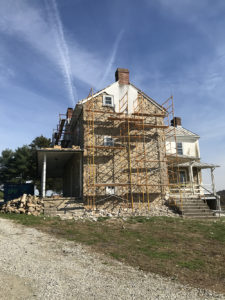 The homestead remained in the Ralston family for more than a century until 1928. In 1944, it was subdivided and sold, representing the first change in the property’s boundaries since the farm’s establishment. In 1956, the Buckwalter Turkey Farm reunited the parcels. A little more than a decade later, the farmer sold the land to Ludens, Inc. and it became part of Bryn Coed Farms.

The Ralston House was built on a center-hall plan with symmetrical rooms on each side and an additional rear “ell,” which was the kitchen wing. Though in need of updating and modern systems, it is structurally stable and includes many original details, such as mantels, random-width flooring and doors.

“Remarkably, the interior of the house has retained its structural and historical integrity,” said Peter Zimmerman, a member of Natural Lands’ President’s Council and professional architect who is overseeing the Ralston House renovations.

While the building is in surprisingly good condition, it has been vacant for some time. “There was quite a bit of deferred maintenance over the years,” said Steve Longenecker, director of building stewardship. “Given the history of this property, we don’t just want to renovate the house. We want to restore it.” 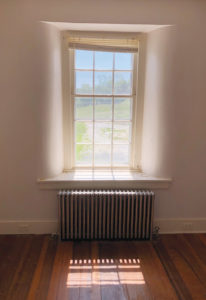 Major work will focus on removing the stucco and repointing the original stone façade; installing a new septic system; upgrading heating, plumbing and electrical systems; renovating the kitchen and bathrooms; and replacing the roof and windows.

All work will be conducted with sensitivity to the historical nature of the building. Additionally, Natural Lands is working with the West Vincent Township Historical Commission, which has already documented and photographed the farmhouse and outbuildings.

The restoration of the Ralston House, like other historical structures Natural Lands owns and cares for, will serve a pragmatic purpose: the farmhouse will be both home and “home base” for stewardship staff, allowing better oversight of Bryn Coed Preserve.

“Since opening to the public in 2018, Bryn Coed has quickly become one of our most visited nature preserves,” said Scott Wendle, Vice President of Preserve Stewardship. “It requires a lot of staff hours to keep up with the day-to-day preserve maintenance, not to mention all the improvements our team has done: installing parking lots, creating rain gardens, planting thousands of trees, building bridges, and expanding the trail system. Having a staff person on site at the Ralston homestead—which will be their office and home—will be a tremendous benefit and improve operational efficiency at Bryn Coed.”

“We’re not in the business of acquiring land to save the buildings, but we can save buildings to service the land,” said Longenecker. “I’m thoroughly enjoying the opportunity to work on this exciting project—which restores and adapts a significant historical structure, preserves a piece of Chester County’s past, and serves the Natural Lands’ mission. Thank you to Penny Wilson for making it all possible!”

The Ralston House restoration is projected to be completed in fall of 2021.

Natural Lands is dedicated to preserving and nurturing nature’s wonders while creating opportunities for joy and discovery in the outdoors for everyone. As the region’s oldest and largest land conservation organization, Natural Lands has preserved more than 125,000 acres, totaling more than 23,000 acres. Nearly five million people live within five miles of land under its protection. Land for life, nature for all. NatLands.org.