At the Media Theatre, October 2–27 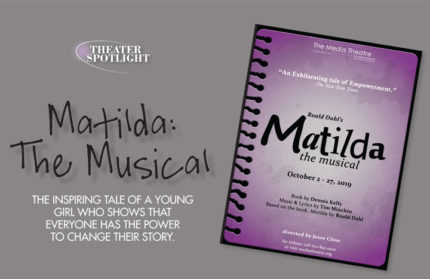 The inspiring tale of a young girl who shows that everyone has the power to change their story.

The Media Theatre kicks off the 2019–2020 season with the imaginative and girl-powered show Matilda: The Musical! Based on the 1988 children’s book by Roald Dahl and adapted by Dennis Kelly, Matilda has won 47 awards internationally, including 7 Olivier Awards and 5 Tony Awards.

The story follows Matilda, a mind-bogglingly intelligent little girl with psychokinetic powers. Unloved by her cruel parents, Matilda manages to find an ally and friend in her loveable teacher, aptly named Miss Honey.

But life at Matilda’s school, Crunchen Hall, isn’t all smooth sailing—Miss Trunchbull, the mean headmistress, hates children and loves thinking of new ways to punish the rule-breakers. Yet Matilda’s courage and cleverness may be what’s needed to start a revolution.

Two Media Theatre students, Sydney Amos and Zoe Nesbitt, take on the role of Matilda. Kelly Briggs, who performed in the original Broadway productions of Les Miserables and Cats, plays the part of Miss Trunchbull, with Megan Ruggles making her Media debut as Miss Honey.

More Media Theatre veterans include JP Dunphy, Deborah Lynn Meier and Tamara Anderson, who play Mr. Wormwood, Mrs. Wormwood and Miss Phelps, respectively. And of course there are the kiddos—over 20 children join the cast playing kids of all ages.

Reserve your tickets now to this lively, family-friendly musical production of Matilda: The Musical!  