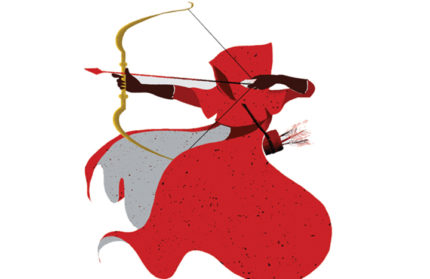 Every holiday season, the Malvern theater stages a musical “pantomime”—a popular British theatrical tradition dating back to the 18th century. Typically, pantos take a favorite children’s story like Snow White, Mother Goose or Jack and the Beanstalk and turn it on its ear. Familiar storylines form the basis for a musical extravaganza filled with outrageous characters, flamboyant costumes, original music, slapstick comedy and topical humor for both adults and kids of all ages.

Coming out of the commedia dell’arte, the Twelfth Night holiday and the Festival of Fools, the Christmas Panto remains the most popular theater form in Great Britain. In a single year, 19 pantos played in London along with 187 in the rest of the country. 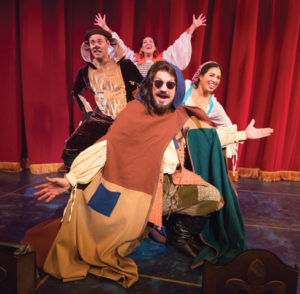 Over the past 16 years, People’s Light has tailored this British form into their own unique brand of holiday hilarity, attracting thousands of visitors each year. And for the first time ever, People’s Light adapts not one, but two classic stories—the Robin Hood legend plus Little Red Riding Hood—to create a holiday show like nothing you’ve ever seen.

In the Panto, Robin Hood is dead, his Merry Men are in hiding and Nottinghamshire is taken over by greedy villainess Lady Nottingham. When young Amelia, a bow-wielding orphan raised by outlaws, is sent on a mission to save “the Granny in the woods” from Lady N’s right-hand wolf, an epic adventure begins!

Set in the 1940s with a dash of the medieval, this hilarious, musical mashup is the most inventive panto yet to emerge from “the nation’s primary creator of such specialized tomfoolery” (writes Newsworks). 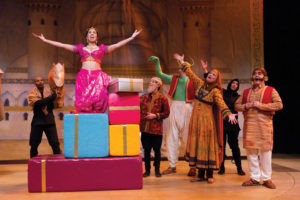 While Little Red Robin Hood delivers exciting new characters, music and adventures, People’s Light audiences can expect those same signature Panto elements they know and love—the Dame, a boisterous yet benevolent matriarch played by a man in a fabulous dress, along with heroes to cheer, villains to boo, animal sidekicks, candy for the crowd, a “messy bit” and audience participation that brings everyone into the action.

Every year, audiences of all ages gather in droves to enjoy the songs, dances, topical jokes and jovial camaraderie of this holiday celebration, only at People’s Light.