After you've visited the Amish sights...

After you’ve checked off all the Amish sights on your bucket list and had your fill of shoo-fly pie, you still won’t have discovered what Lancaster County is all about.

The fact is that the County’s history—at least the recorded history—dates back to the 17th century. Even before that, there were Native American tribes who lived in villages, farmed and hunted their lands, conducted ceremonies and made wars amongst themselves.

Yet until the beginning of the 18th century, when several European immigrants began to settle the area, few permanent marks were left on the land for visitors to see today. Eventually, their major settlements grew into Lancaster City and other towns, like Columbia and Ronks.

We think it’s well worth a short drive to discover some of the history in Lancaster County.

Birth of the Town of Lancaster

The oldest still-standing structure in Lancaster County is the Hans Herr House, located in the town of Willow Street, built in 1719 by his son Christian Herr. Like others who came to the area, Hans, his family, friends and fellow Mennonites were seeking a place where they could practice their religion in peace. Today, the Hans Herr House is a museum on an 11-acre campus with other early buildings.

In 1725, Benjamin Witmer built a tavern—actually more of a wagon stop—on the old Kings Highway betweem Philadelphia to Lancaster. Witmer’s Tavern is still standing and considered one of the best surviving structures of its type. Marked by a historic marker, the tavern is on Route 340, at 2014 Old Philadelphia Pike, just east of the junction with U.S. Route 30 (aka Lancaster Pike).

By 1729 Lancaster County had separated from Chester County. Far from being a city, the main settlement was originally called “Hickory Town,” with a population of just 15. Later renamed Lancaster, the town was declared the county seat, and construction began on a county courthouse, a prison and a market. In 1734, James Hamilton, a lawyer, acquired the town site of Lancaster for 5 shillings from his father. Not a bad investment!

Today Lancaster City has plenty to recommend it. Vibrant First Fridays, Art Gallery Row and more lend it a cosmopolitan air with plenty of attractions—beyond its historic sights. 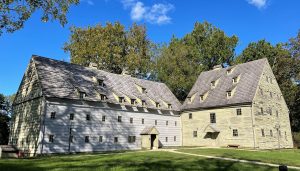 But back to history. Lancaster County blossomed during the 1730s. In 1732, The Ephrata Cloister, founded by Conrad Beissel, was established about 15 miles northeast of the town of Lancaster. The Cloister, essentially a monastery, became a site where Beissel and his followers prepared for the Second Coming of Christ. Later they became known for the calligraphic art of Frankturschriften, a form of a cappella music performed according to Beissel’s rules, and the production of the Martyrs Mirror, a 1500-page book. Today, the Cloister is a museum, open to the public. 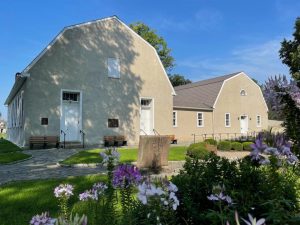 Also erected during this period was the Donegal Presbyterian Church in Mount Joy, about 17 miles west of Lancaster. Today it remains an active church and is well known for its “Witness Tree,” a gigantic white oak, now memorialized by a cast iron plaque—the tree succumbed to disease. In 1777, the church congregation circled the tree and pledged their allegiance to the American Revolution.

Lancaster’s congregation at Trinity Lutheran Church was formed in 1730, although the Church itself wasn’t built until 1766. Located on South Duke Street, it’s still in operation. At construction, its 195-foot spire was the tallest in North America west of Philadelphia.

In the mid-1730s, the Mascot Mills were constructed east of the town of Lancaster in Ronks. Ultimately owned by Jacob Ressler and his descendants, it still operates today, grinding corn for the mill’s guests. The mill is open to the public during the summer.

At the western end of Lancaster County, on the Susquehanna River, is Columbia, formerly know as Wright’s Ferry. It’s one of the nation’s oldest frontier towns, settled by Quakers in the 1720s. In 1730, John Wright was granted a patent to operate a ferry across the Susquehanna River.

The Wright family made important contributions to the early town, including building Wright’s Ferry Mansion in 1738, which is now a museum with a fine collection of early 18th-century furniture, ceramics, metal and glass. Susanna Wright, a Quaker, studied languages, including the tongues of the local Native peoples, loved literature, and was a close friend of Benjamin Franklin.

Just beyond Lancaster County, about 21 miles outside Lancaster City, is the Cornwall Furnace. Founded in 1742, it’s the only surviving charcoal cold blast furnace in the Western Hemisphere, and continued in operation until 1883. Nearby, but now flooded, are the Cornwall Ore Banks, one of the world’s greatest iron ore deposits. Operated until 1973, the mine yielded over a hundred million tons of ore. Together the furnace and banks represent the heart of Pennsylvania’s iron industry. The site is open year-round.

Our new nation may have been founded on July 4, 1776, but the first Congress—then called the Continental Congress—was on the move under the persistent pursuit of the British troops.

In the early autumn of 1777, after the defeat of the troops at the Battle of the Brandywine, the Continental Congress escaped Philadelphia to Lancaster City, where it met for one day at the Penn Square courthouse, before moving on to York. The historic courthouse, however, was destroyed by fire in the 1780s.

Lancaster County again became our nation’s permanent capital … almost! In 1789, a proposal to designate Columbia as the capital was submitted to George Washington, who favored it. But the proposal ultimately failed by one vote.

However Lancaster City became the state capital in 1799, as proposed by John Harris to include four acres near the Susquehanna River. That lasted until 1812, when the capital moved to Harrisburg, partially on the Harris tract. Senator William Maclay also sold some land to the Commonwealth for that purpose.

So much for politics. 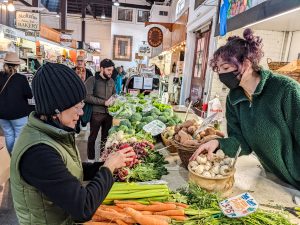 Lancaster in the 1740s was emerging as a center of industry and commerce. By 1742, the Central Market—still in use as a farmers market—was established in Lancaster City. A fire department was organized in 1744, and a newspaper, the Lancaster Gazette, later the Lancaster Intelligencer, began in 1752. Several longstanding businesses were also established: Steinman’s Hardware in 1744, the Demuth Tobacco Shop in 1770, and others after them in the 19th and early 20th century.

The year 1795 marked the completion of the Philadelphia & Lancaster Turnpike, the first hard-surfaced road in the United States. The turnpike was private, charged tolls, but greatly relieved the hardship of travel over that route.

Another milestone: the longest covered bridge across the Susquehanna was completed in 1814, but was destroyed 18 years later by flooding water and ice. A replacement bridge was built, but it was purposely burned in 1863 to obstruct the advancing Confederate Army. A third bridge was destroyed by a hurricane in 1896, and a fourth was dismantled in 1963. A fifth bridge was built in 1930 and still stands today. And a sixth bridge, the Wrights Ferry Bridge, was built upstream of it in 1972 and remains in operation.

The Columbia Crossing River Trails Center is an excellent place to learn more about the Susquehanna and its history. Riverfest, held in June, is a prime time to visit.

Slavery ended slowing in Pennsylvania. In 1780, the Gradual Abolition Act was passed in the Commonwealth, but applied only to those enslaved people reaching 28 years of age. In 1790, there were still 345 enslaved African Americans in Lancaster County.

In 1804, one of the first spontaneous uprisings against slavery took place in Columbia at the home of Thomas Boude, a Revolutionary War hero. Many believed the event gave rise to the Underground Railroad.

And interestingly, as a more literal part of the Underground Railroad—distinguished from the network of people helping enslaved people escape—the Philadelphia and Columbia Railroad, finished in 1834, had secret compartments in which many enslaved people found their way north to freedom.

In 1851, an event that rocked the nation and presaged the Civil War occurred in Christiana, in southeastern Lancaster County. Fifteen armed men from Maryland attempted to retrieve several escaped slaves. These enslaved people, joined by several Quakers, resisted and a melee ensued, leaving one Marylander dead. The fugitives were tried, defended by the Abolitionist and Congressman Thaddeus Stephens, and were acquitted.

But the Christiana event—dubbed “Where Freedom Began”—is regarded as a major provocation for the Civil War. The story of the Christiana Resistance is recounted at the Underground Railroad Historical Center, housed in Zercher’s Hotel in town. 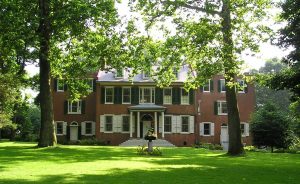 Despite its deep connection with our country’s history, Pennsylvania has been home to only one president. In 1856, James Buchanan was elected the 15th President of the United States and served just one term—the last president before the Civil War.

Before and after his presidency, Buchanan lived in Lancaster, at an estate known as Wheatland, where he died at age 77. The Federal-style mansion is now preserved as a museum.

Today both Lancaster City and Lancaster County are thriving, with many more features of historical and future significance. If you can, take a weekend or a week to explore. And be sure to pick up your shoo-fly pie.

Looking to visit the sights mentioned in this article? Here’s what you need to know.