Time for a tercentenary

Small-town charm takes center stage as the Village of Marshallton, named for Humphry Marshall (1722–1801), celebrates this popular historic gentleman’s 300th birthday on October 8, 2022. And rightly so.

Marshall was the esteemed botanist and scientist who, in the 1700s, played a major role in America’s transformation from frontier wilderness to productive landscapes. Marshall is known for his contributions to agriculture as well as astronomy and meteorology (he had an observatory in his home where he studied sunspots).

As a Quaker, Marshall did not actively participate in the American Revolution. Rather, he saw himself simply as an American working to encourage his fellow colonists to understand and capitalize on the country’s native plants and natural resources.

Today, Marshall is regarded as the Father of American Dendrology (the study of woody plants, trees and shrubs) and is best remembered as the author of Arbustum Americanum (1785), the first publication to catalog native plants written and published in America.

Yet Marshallton is not the only place that shares the name of Humphry Marshall. In 1848, Marshall Square Park in West Chester became the borough’s first public park and was established to provide “suitable walks that introduce various ornamental trees and shrubbery.” A point of distinction is that Marshall Square predates Central Park in New York City by nine years.

Another Humphry Marshall fact: Many botanists have one or more species of plant (called genus) named after them, and Marshall’s name is used to identify the genus Marshallia, which is commonly referred to as “Barbara’s buttons,” found in the southeastern United States.

Join in the celebrations of this local son’s tercentenary.

Humphry Marshall Day, Marshallton
Events are held on the grounds of Martin’s Tavern and the newly created Humphry Marshall Park. The daylong celebration and activities include outdoor community events such as prominent speakers, colonial reenactors, period music, open-hearth cooking and tastings, and colonial brews. Notable Chester County songster Charlie Zahm and friends are performing early American songs throughout the day. Kids will enjoy colonial games and crafts and a special native tree propagation program with saplings that are part of a tree-planting programs in West Bradford Township parks. 11 a.m. to 4 p.m. Free. 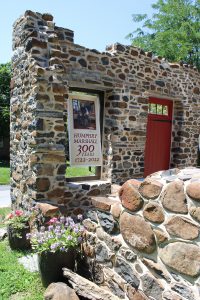