The return of the Bald Eagle is the story of a remarkable species rebound. 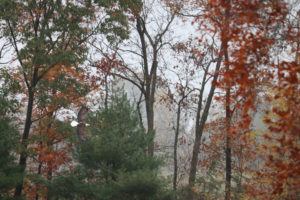 On a wet morning this past March, Preserve Manager Darin Groff and Assistant Caleb Arrowood drove sign posts into the slushy mud at Bryn Coed Preserve. The Preserve encompasses 520 acres in Chester Springs, including the headwaters of the Pickering Creek. About 300 yards away, a massive nest of sticks is visible at the top of a white pine and, out of view, is a female Bald Eagle incubating three eggs.

Back from Near Extinction 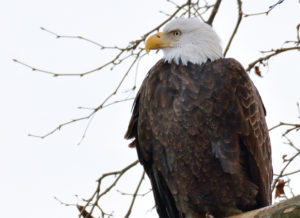 Once a common sight in North America, Bald Eagles declined precipitously in the mid-20th century, largely due to habitat loss, hunting and the widespread use of DDT, a pesticide that caused their eggs to be too fragile. At their lowest point, only 487 nesting pairs of Bald Eagles remained in North America.

In 1940 Congress passed The Bald and Golden Eagle Protection Act, which prohibited commercial trapping and killing of the birds. It took another 27 years before the Bald Eagle was protected under the precursor to the federal Endangered Species Act.

Thanks to conservation efforts, by the 1990s breeding populations of Bald Eagles could be found across most of North America. And, in 2007 the species was removed from the federal Endangered Species list.

The recovery is considered one of the most successful and remarkable species rebounds in history. 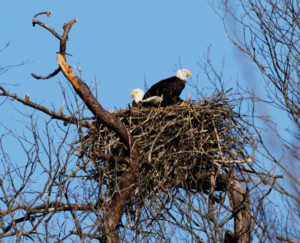 Bryn Coed is just one of many of Natural Lands’ nature preserves that offers ideal feeding and nesting habitat: abundant wetlands with high water quality for hunting and foraging, and mature trees for perching and nesting.

Yet, threats to our national bird remain. Today, human activity and habitat loss are the Bald Eagle’s most significant challenges. The species is particularly sensitive to nearby human activity—even well-meaning, curious hikers.

In fact, human activity is the leading cause of nest failure in Pennsylvania, according to Pennsylvania Game Commission biologist Patti Barber. “The single biggest threat to Bald Eagle nests in Pennsylvania is human disturbance,” she said.

The Bald and Golden Eagle Protection Act prohibits any activity that’s likely to interfere with the birds’ normal breeding behavior. Federal regulations require people to keep a distance of 660 feet from an active eagle nest, although the PA Game Commission recommends a 1,000-foot “buffer zone.”

Still, Barber advocates educating the public rather than trying to keep them in the dark. “The best protection for eagle nests is to have people that care about them,” she said. “If we hide them all, we’ll be separating people from them. We want people to be attached to these nests, and we want to keep society engaged with eagles.”

The signs Darin and Caleb are installing at Bryn Coed encourage visitors to stay on the trail and keep dogs on a leash with educational information to incentivize compliance. “If people wander too close to the eagles’ nest, they’ll probably abandon it,” Darin explains. “Bald Eagles use the same nest for years—even decades—so now that Bryn Coed is open to visitors, we don’t want the eagles to feel threatened.” 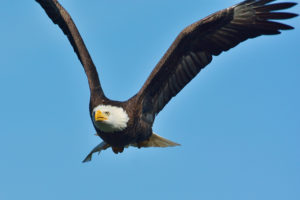 There’s no question that Bald Eagles are among the most compelling species of wildlife. One of the largest birds in North America, an adult Bald Eagle can be nearly 38 inches long, have a wingspan of more than 80 inches, and weigh as much as 14 pounds.

A female Bald Eagle is larger than her male counterpart. Though both sexes will incubate eggs, the female spends more time doing so and her size makes her better suited to shelter both eggs and her young from harsh weather. The male’s smaller size reflects his abilities as a fast and nimble hunter.

Bald Eagles typically don’t mate until four or five years of age. And once paired up, they mate for life. They construct their nests from sticks, re-using and adding material to them year after year. Called “aeries,” these large nests can grow to 6 feet wide and 10 feet high. The largest nest ever recorded was more than 9.5 feet in diameter and 20 feet tall.

The pair of birds at Bryn Coed Preserve have been using the same nest site for the past four years, so it’s still a moderately sized aerie.

Eagles’ eggs require about 35 days of incubation. The hatchlings develop most of their feathers within the first month, hop around the nest at six to seven weeks, and begin to fly at three months. They leave their parents in the fall.

With careful habitat management and just enough positive interest by visitors—provided they admire from a distance—we expect to see Bald Eagles flying around Bryn Coed Preserve for many years to come.

“Even though I see them fairly often, I still stop what I’m doing to watch them,” said Darin. “If this place had become a housing development, they’d be gone. It’s awesome to know our work saving land is also saving eagles.” 

Natural Lands is dedicated to preserving and nurturing nature’s wonders while creating opportunities for joy and discovery in the outdoors for everyone. As the Greater Philadelphia region’s oldest and largest land conservation organization, Natural Lands—which is member supported—has preserved more than 125,000 acres, including 44 nature preserve,s totaling more than 23,000 acres. Some 2.5 million people live within five miles of land under the organization’s protection. Land for life, nature for all. NatLands.org.