Dark, decadent and alluring, the legendary musical Cabaret is a must-see for all theater lovers! 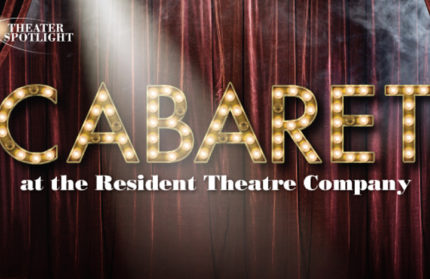 The Resident Theatre Company (RTC) kicks off its third full season with one of the biggest hits ever … Cabaret. This renowned musical—which earned 23 Tony Awards from all of its Broadway incarnations—will make its West Chester debut October 4th.

Cabaret brings us to 1930s Berlin through the eyes of Cliff Bradshaw, a young American writer visiting Berlin to finish his novel. He finds all the postwar decadence and excitement he was looking for, as well as the mysterious Sally Bowles, a cabaret singer at a popular nightclub called The Kit Kat Klub.

The performances at the Klub, including comic songs, big dance numbers featuring the Kit Kat Girls, and lots of spectacle, are led by the The Emcee (the role made famous by Joel Grey), who invites you to leave your troubles outside.

Based on the book The Berlin Stories by Christopher Isherwood about his travels in Germany during this time, Cabaret brings us on a journey through 1930s Berlin, just before the tipping point of World War II, and gives us a glimpse into a country on the brink—full of extravagance and art, freedoms and fear.

Cabaret boasts an award-winning score including such classics as “Maybe This Time,” “Don’t Tell Mama” and, of course, “Cabaret.”  RTC has assembled a powerful cast and production team to bring this show to West Chester, including Broadway alums and returning RTC favorites.

Rounding out the season, for the holidays RTC performs Stephen Sondheim’s Into the Woods, a modern twist on the beloved Brothers Grimm fairy tales. And in spring 2020, mark your calendar for Chekhov in Bucks County, PA in Vanya & Sonia & Masha & Spike—Christopher Durang’s Tony Award winner for Best Play.

Tagged under: cabaret, Theater, West Chester
back to top