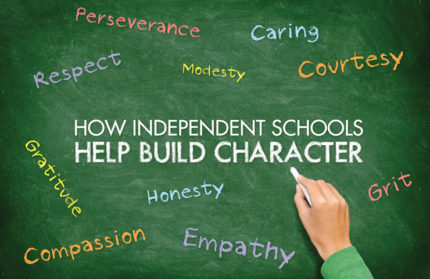 It’s in Everything They Do

We want a moral compass for our children. We’d like them to have “character.” We expect they’ll get the values embodied in character from us, their parents. But we trust our schools to model the values; maybe teach them; hopefully develop them.

But what do we mean by character?

To some, character is basically honesty, not only to others, but also to ourself. George Washington, we think, was a paragon of character because he could “not tell a lie.”

Second, we include respect. Think deeper about respect—of ourselves, of others, of our community and environment—and the subject blends into notions of responsibility, fairness and citizenship. Our children should learn to be thoughtful, balanced and fair.

Fourth we include perseverance. Some call it grit or courage. A moral being will take responsibility for results, not merely hope or purpose, trying to overcome difficulty or opposition.

Fifth is worship of God, or, more secularly, modesty before a force we do not fully understand.

We talked with area independent schools to learn more about how they approach building character in today’s students.

Honesty is the most basic element of the character traits taught in our independent schools, very likely the first we learn. The schools have various ways of enforcing honesty, ranging from private discussions, to public discussions, to establishing an honor code, to convening an honor council when needed.

At the Tatnall School, honesty is one of the nine “daisy values”—the daisy being a symbol of how a child thrives, blossoms and adds grace to the earth. At the Baldwin School, honesty is a Core Value. The Hill School, in its Core Tenets, embraces “honesty and genuineness.”

Respect initially invokes manners: how we behave towards others. For instance, a student is taught to be attentive while another is speaking. The protocol is simple—the Golden Rule—to “do unto others as we would have others do unto us.”

To learn respect also involves knowledge of consequences. At Church Farm School, respect is one of their four core values, together with responsibility, integrity and brotherhood. The Hill School embraces “honesty and genuineness, courtesy and respect, and gratitude and concern for the greater good.” The school calls on its students to “serve the common good.” The Tatnall School emphasizes concern for the environment.

Nancy van Arkel, Principal of Westtown’s Middle School, tells the story of a student going to bat at a critical point in a ballgame. In tears, the batter is sure he’ll strike out. But the older co-captains calm him. “We’ll win or lose as a team,” they say to him.

Compassion begins with a sense of community: “belongingness,” according to Reverend Ned Sherrill, Church Farm School’s Head of School. Whether because of their youth or their disadvantaged backgrounds—about 90% receive financial aid, over 60% are non-white, about 15% international—Church Farm students learn to form and nurture bonds. In class, after class, in clubs and sports, they share their experience, and their initial bonds become life-long friendships.

At Baldwin, students are engaged in a host of service learning projects—how girls are educated around the world, preparations for Martin Luther King Day, the school’s winter clothing drive, to name a few. Contribution is pervasive and reflected in its graduates. Many choose government, board membership or nonprofits as careers. Dr. Marisa Porges, current Head of School and an alumna, served in the Navy after graduation.

Episcopal Academy has a Volunteer Service and Learning Cooperative to serve the needs of others “as if their needs were our needs.” Through a wide variety of projects, the school challenges students “to make a difference” and “to be compassionate citizens, using their education and talents for the good of humanity.”

There’s a formal leadership development curriculum at The Hill School that contributes to building character. In addition, the school’s Student Philanthropy Council meets regularly to provide grants to local nonprofit groups. And through required jobs—ranging from setting tables at meals to assisting staff with office tasks—Hill students learn fairness, responsibility and empathy.

According to Tim Quinn, Head of Tatnall’s Upper School, building character is “integrated into everything we do.” The students’ caring extends “to others, to themselves, and to the environment.” It’s “not a separate program” and it “asks students to go beyond simply being nice and respectful.”

Honesty, respect, compassion are, well, good things. We want and encourage these traits. But, we also want and value leaders: persons of character who will take on a tough battle; see it through; persist.

At Westtown, they call them “up-standers.” An up-stander will stand up; “fight for it;” “not give up.” An example is a project at its sister school in Ghana, where Westtown built an electricity-generating windmill. After early efforts failed—the tower collapsed in a windstorm—the school sought a grant to finish the project.

At Church Farm, says Reverend Ned Sherrill, the typical student enters “raw” and leaves “polished”—a trustworthy, curious, fully engaged and courageous leader; a young man who “in the midst of crisis, will do the right thing.”

Another part of character is modesty: to accept responsibility for what you’ve accomplished while attributing to others—whether the weather, the economy, luck or team members—your actual experience and results.

Westtown is founded on Quaker values: “There is that of God in everyone.” Equality, simplicity, peace, integrity, stewardship and community all speak modesty. There are quiet times—times to “go inward and think.” The aim, on the whole, is to make “new and better versions of themselves.”

Devon Prep, founded on and still driven by Catholic values, attributes its teaching to the Piarists, who professed “vows of poverty, chastity and obedience.” Today the school’s mission statement calls upon its students to “develop an intellectual curiosity of the world and have a strong moral and ethical compass to both anchor and guide them.” Observes Mark Aquilante, Director of Academic Affairs, character is pursued through guest speakers, discussions, retreats and “framing of teachable moments.” But, he says, there’s “no silver bullet.”

At The Hill School, there’s an all-school chapel service, where students often speak about the experiences that have shaped their character. At Church Farm, worship, matters of spirit and religious study are integral parts of school life.

For years, there’s been a growing chorus calling on our schools to teach character. It’s been a response to cheating, bullying and a decline in empathy. The independent schools may not have solved the problem. But they have absorbed the lesson. In fact, these schools view character as a way of life: built into everything they do.