To attract birds and butterflies

Ten years ago a pair of red-shouldered hawks built a nest in a tall white pine at the southern edge of Hildacy Preserve. Under the watchful, binoculars-aided eyes of Preserve Manager Mike Coll, the raptors successfully fledged young. Every year since, those same adult hawks have mated, nested and reared young at this 55-acre oasis of nature in the midst of suburbia.

“It’s because we’ve turned Hildacy into a giant insect factory,” says Mike. “By intentionally planting a diversity of native trees, shrubs, grasses and perennial flowers, we’re giving insects the food sources they need. The vast majority of birds feed insects to their young. And even when they aren’t eating bugs, they’re eating things that eat bugs, like mice, squirrels, frogs—all of which are prey species for raptors like red-shouldered hawks.”

Here’s how we did it—and how you can do the same where you live. 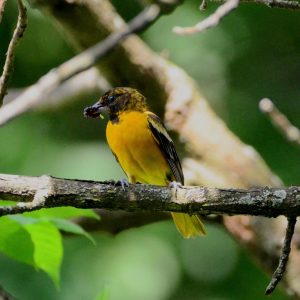 Native plant species are key to ecosystem restoration. This is easy to understand if you understand the food web.

But insects are picky when it comes to their greens. They’ll only eat species that have evolved alongside them … otherwise known as native plants.

Caterpillars are the best creatures on the planet at converting plant energy, which is why so many birds—96% of North American land birds, in fact—prefer them to other types of insects.

Dr. Doug Tallamy, professor of entomology and wildlife ecology at the University of Delaware and a Natural Lands board member, uses chickadees to illustrate this preference for caterpillars. He studied breeding chickadees by setting up cameras at their nest boxes. He determined that a pair of chickadees must access 6,000 to 9,000 caterpillars to rear just one clutch of young.

“We all have chickadees at our feeders so we think they eat seeds. And they do eat seeds, all winter long,” Tallamy said during one of the many presentations he gives across the country. “But when they’re making babies, they don’t eat seeds. They eat caterpillars and feed caterpillars to their young. And that means if you don’t have enough caterpillars in your yard, you’re certainly not going to have chickadees.”

And you won’t have enough caterpillars if you don’t have the right plants.

Dr. Tallamy is the lead author of a new study published in Nature that systematically identifies the most critical plants needed to sustain food webs across the United States. His research finds that only a few “powerhouse” plants support the majority of Lepidoptera, the order of insects that includes butterflies and moths. About 90% of what caterpillars eat is created by just 14% of native plant species, with a mere 5% of plants producing 75% of the food.

Native oaks, willows, birches and wild cherry trees are on Tallamy’s powerhouse list, along with goldenrods, asters and perennial sunflowers.

Mike Coll has been adding these species along with many other natives to the Hildacy Preserve. More than 1,500 native trees have been planted in the last decade, along with hundreds of native shrub species. Many acres of meadows have been converted to native grasses. Even the wetland areas have been planted with native species of plants that thrive in anaerobic soil conditions.

Of course, planting native species isn’t the entire equation. Invasive plants—species introduced from other parts of the world that lack natural predators and grow unchecked—are all too adept at crowding out their native cousins.

In 2018 Mike installed a meadow around the office building at Hildacy Preserve. He used a mix of native grasses and perennial herbaceous plants, and over-seeded them to create a thick carpet. He mows the meadow annually and spot-treats invasives like Japanese honeysuckle and mile-a-minute weed.

Lawn as a wasteland

The meadow around the headquarters building replaced several acres of lawn. Now, instead of what was essentially an ecological wasteland, the native plants provide food for caterpillars and other insects, nectar sources for butterflies and hummingbirds, and seeds for short-tailed shrew and meadow jumping mice among others.

A 2018 study by the National Science Foundation on residential lawns confirmed what ecologists have known for years. The researchers found that America’s love affair with turf is contributing to a continental-scale ecological homogenization. Add to that the amount of fossil fuels needed to keep those lawns tidy, and the gallons of water needed to keep them green, and it’s easy to see why environmentalists advocate reducing turfgrass whenever possible.

At Hildacy, Mike knew swapping meadow for lawn would have a positive impact on the overall ecology of the preserve. Recently, a pair of eastern screech owls raised a clutch of babies in a nest box that had gone unused for years.

Eastern screech owls generally breed within two miles of the place they were born, which means Hildacy may become home to generations of these petite predators. If so, Mike will have his binoculars at the ready to watch their progress.

Natural Lands is dedicated to preserving and nurturing nature’s wonders while creating opportunities for joy and discovery in the outdoors. As the region’s oldest and largest land conservation nonprofit, member-supported Natural Lands has preserved more than 125,000 acres, including 43 nature preserves and one public garden totaling more than 23,000 acres. Nearly 5 million people live within 5 miles of land under its protection. Land for life, nature for all. NatLands.org.