About 52 years ago, on April 4, 1968, Martin Luther King, a renowned minister and leader of the Civil Rights Movement, winner of the Nobel Peace Prize, most well-known for his “I Have a Dream” speech in Washington, D.C. in 1963, was shot dead by James Earl Ray, a 40-year-old career criminal and prison escapee. Ray wasn’t caught until two months later outside London at Heathrow Airport. Meanwhile, besides the manhunt, King’s death launched riots and demonstrations in over 100 U.S. cities, including Wilmington.

In Wilmington, four days after King’s assassination and the day before King’s funeral in Atlanta, a brick was thrown through a store window at 4th and Market Streets. More rocks were thrown and fires set. For two days, the violence continued and spread. Four hundred were arrested. Thirty were injured. At least 15 buildings were burned. State police were enlisted. Calling for “law and order,” Governor Charles Terry called in the Delaware National Guard, which didn’t leave for nine months.

Nine months. Riot gear, billy clubs, tear gas, guns, bullying language. Reportedly, this was one of the longest deployments of any National Guard on American soil since the Civil War.

On April 29th, Douglas Henry, a 35-year-old Black man, was shot dead. The National Guardsman who handled the gun wasn’t charged. The announcement only inflamed a combustible situation.

What had initially been an outpouring of grief by Wilmington’s Black community over King’s death became an “occupation” and, over objection and resistance of its citizens, including Wilmington’s mayor, continued through the summer, through the fall, into the winter. In May, the occupation was expanded to include Rehoboth Beach and the campus of historically Black Delaware State College. Local groups, citizens, students, churches and the media resisted and protested.

In August, over a hundred members of the Wilmington Youth Emergency Action Council were arrested and the occupation began to get national attention. Increasingly there were calls to remove the National Guard, but Governor Terry resisted. In November, Governor Terry lost the election, replaced by Russell Peterson. In January, within a week of Peterson’s inauguration, the head of the National Guard was fired and the troops sent packing.

For the 50th anniversary of Martin Luther King’s assassination and the subsequent riots and occupation, the Delaware Art Museum commissioned a work by Hank Willis Thomas to commemorate the events. Thomas, a photographic and conceptual artist living in Brooklyn, with works exhibited nationally and internationally, produced a piece entitled Black Survival Guide, or How to Live Through a Police Riot. Thomas is also a sculptor and an author of All Things Being Equal, Pitch Blackness, and Winter in America. 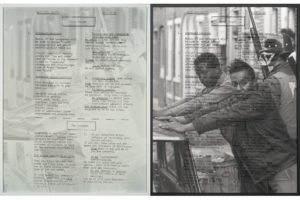 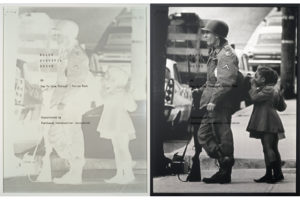 Panels from Black Survival Guide, or How to Live Through a Police Riot, 2018, Hank Willis Thomas

The Black Survival Guide was exhibited in the Museum in 2018, and is on view again in 2020 until September 27, following the violent deaths of George Floyd, Ahmaud Arbery, Breonna Taylor and others. It consists of 12 large panels, about 5’ x 4’, overlaying the words of the original Black Survival Guide, which was written and distributed by the Northeast Conservation Association during the 1968 tensions.

The words of the Guide are superimposed over photographs, originally taken by photographers from Wilmington’s News Journal, of the occupation—gun-toting Guardsmen in riot gear confronting and arresting Black citizens—printed on retroreflective vinyl with aluminum backing. The photos become visible only when viewers shine a flashlight directly on the print. The curator of the exhibit, Margaret Winslow, compares it to headlights beaming on an interstate highway sign. It “amplifies the urgency of the message.”