A Stone Farmhouse in Elverson

Inspired by Provence, but every bit a Chester County Classic 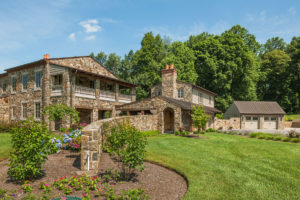 Fieldstone farmhouses are such an iconic sight in Chester County that it can be a shock of recognition to go rambling out in the world and find that, in fact, there are other places where this style is a tradition as well.

So when people go to, say, Provence, they see that farmers there, too, from centuries past found rocks were inconvenient when plowing. But if enough were collected, these fieldstones made a good, solid house.

As time went on you could erect outbuildings, too, and maybe a bigger, nicer house as the farm prospered.

Eventually one generation would hand down to the next a complex of buildings as efficient for agriculture as they were charming to the eye.

About ten years ago, a local couple who had fallen under the spell of southern France started looking for a good piece of land to recreate that magic, to build a “timeless and generational” property they could pass on to their own children.

After a two-year search for the right property, they spent six months thinking about exactly what they wanted and then another six interviewing architects.

The couple chose architect John Milner, known throughout our area for his expertise in historical preservation. It’s not as widely known that Milner traveled in Provence a great deal himself and knew the traditional styles there well enough that he and the couple decided to work together. 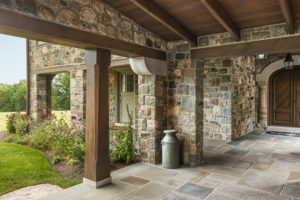 Milner had several goals for the home’s design. One was to place the house so there were beautiful views from every vantage point, and so the house wouldn’t be visible from public roads.

Another was to preserve the existing slopes, to “drape the house over the topography,” he says.

A third goal was to have the initial visit to the property be what he likes to call “a process of discovery.” As you come up the drive, not everything is visible.

You see a garage, a guest house, and a transitional structure he calls a terrace room—a roofed open-air space connected to a porch on the main building. These outer structures are connected by a curving wall, and the idea is for the entire property to unfold itself before you as you go in.

With walking paths along one side of the exterior and the interior of the main building organized along one straight axis, the property is deliberately designed to inspire you to continue to discover.

One thing that emerges is that even if you explored the home without knowing the influences that shaped it, the seemingly familiar fieldstone building is like a person whose faint accent takes a minute or two to pick up on.
The many arched doorways are a hint of the Mediterranean. They’re made of wood, and some are double doors with one side wider than the other, a typical Provençal detail, Milner says. 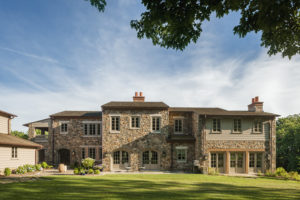 A Provençal provenance can also be sensed in the columns in a balustrade along the second-floor balcony and the terra-cotta chimney pots. There’s also distinctive brickwork at the tops of the chimneys and portions of the highest rooflines—there not so much as regional style but because, Milner says, he just likes brickwork.

The way the stones are laid is actually more typical of our own region, Milner says, and it gives the property that first impression of familiarity, with the Provençal touches emerging soon as a kind of intriguing counterpoint. Milner says the wooden columns are their stylized interpretation of traditional timbering.

One set of windows features a pair of stone columns Milner got from a dealer in France, and one door includes a bas-relief column obtained from the same dealer. The house is well supplied with casement windows with prominent limestone lintels—another southern French detail. 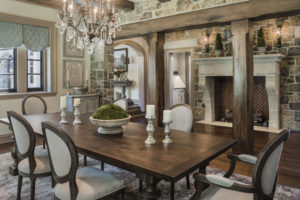 The interiors, even more than the outer details, embody a subtle distinction in Provençal architecture, which is the line between the utilitarian rustic and the more sophisticated rural manor house.

We see the same thing in Chester County, often in the same house, where the original house meant to provide shelter is part of a complex that includes a larger, more elegant structure built as the owners prospered over the years. In Provence, the more rough-hewn style is called a mas, and the more elegant and sophisticated, a bastide.

As the owner explains it, the interior leans to the more sophisticated side. The molding, woodwork and ironwork are what you would see in a manor house. The dining room, with its distinctive herringbone fireplace, has the exposed-stone walls you’d see in a home where a new generation added to the original structure as their circumstances became easier. 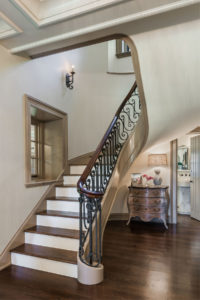 A staircase that winds upward embodies this idea. With elegant ironwork and carved wood, lit by a deeply set window, this staircase might be found in a manor home in the country—but you’d hardly call it “rustic.” That’s not to say it’s overtly formal. It’s meant to be inviting. “We wanted something that was really open to flow,” the owner says. They wanted guests to feel free to walk about and explore.

“We built the home to handle the kids,” she adds. So the idea was to make it both beautiful and cozy, a place people could be comfortable, a place, she says, where her daughter’s soccer team could come for a sleepover and the next morning be “sitting on all your countertops eating breakfast.” 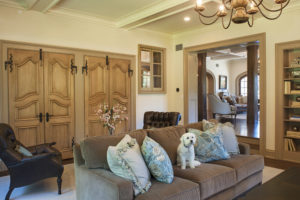 Stylistically the house is very much influenced by the traditions of Provence, where history is measured more in millennia than the shorter centuries we think about here. But there’s an emotional component to it as well. Visitors look at the farms there, sense the succeeding generations of families that lived their lives there, and muse on all that life, extending back in time.

It’s the same in our area. A possible difference being that its creators imagine all that life extending into the future, not the past—their children, and maybe their children’s children, living in this beautiful and peaceful spot.

“We feel so fortunate,” the owner says. “It was a labor of love.”