This year the 78th Chester County Day House Tour will open the doors of 16 notable homes and 6 public landmarks.

The 78th Chester County Day House Tour will open the doors of 16 notable homes and 6 public landmarks in the northeast portion of the county—from little-known byways around Exton and Frazer up through the history-rich communities of Chester Springs, Kimberton and Phoenixville. It includes charming houses, tastefully furnished, unusual houses that are imaginative inside and out, and opulently spectacular properties restored to past glories for the benefit of beholders today and as a lovingly preserved legacy for the future. 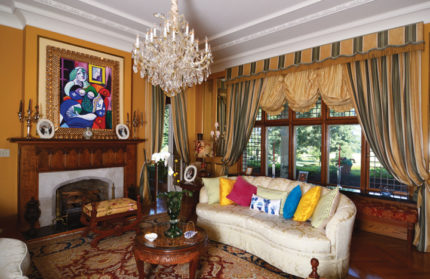 The only thing more stunning than the fairy-tale manor house and regally opulent fountain-studded gardens of Robert and Maria Soledad Hollenshead’s home on Old Valley Road north of Exton is the state to which it had fallen. 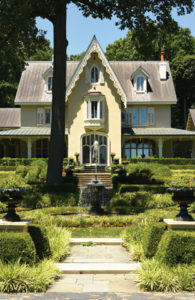 It’s hard to believe now, but Robert Hollenshead says the house, built in the mid-19th century and inspired by the work of Gothic Revival leader Andrew Jackson Downing, had stood vacant for about 40 years. Rain poured in through the roof; the magnificent plaster and woodwork paid a heavy toll.

But the Hollensheads saw potential in the property and decided to make the very substantial investment needed to bring it back to its original glory. Today, the house blends Gothic drama and Queen Anne whimsy, with leaded-glass windows and carved woodwork on the projecting eaves. A literal boatload of hardwood glows on the walls, and the rooms are elegantly furnished from the floors to the ceilings.

The gardens embrace an art studio and carriage house, surround the house and sweep out to the south. If you ever imagined you could see such things at a private home in Chester County, well, that’s what Chester County Day is all about. 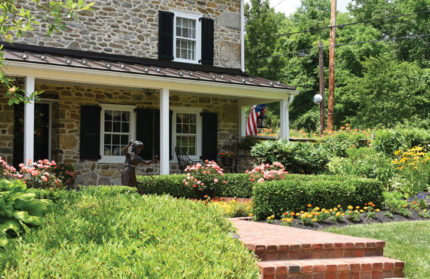 After the Spadafords bought the classic stone house—the original part of which was built in 1780—they put in some additions, including an airy sitting and dining area off the kitchen. There’s a tasteful glow of well-crafted woodwork in the kitchen cabinetry as well as from the pecan and hickory floors, cherry in the office, and the heavy exposed beams of the living room (original to the home), built in and evocative of the 18th century. 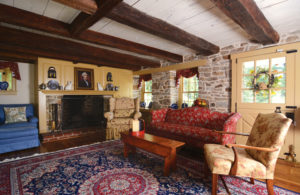 The dining room has a charming mural by Birdsboro artist Carrie Kingsbury, done in a Rufus Porter folk-art style that picks up the colors in the house—a style and subject matter that original owner Jacob Binder would be approvingly familiar with.

The house is circled by expansive gardens and woods on the five-acre grounds, one of the many ways the Spadafords have respectfully made the home their own while living their chapter of it.. 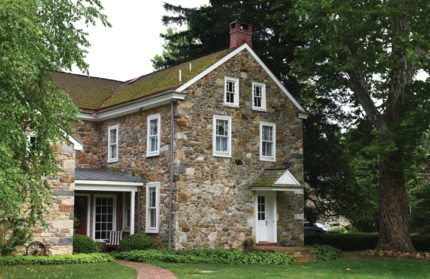 You can sense the history all around at Paige and Dale Parker’s house on Yellow Springs Road. The circa 1825 house is part of a cluster of similarly venerable buildings in the village, still known by the locals as Rapp’s Corner, named after the long-since-gone general store once owned by Joseph Rapp.

The main exterior section of the Parkers’ fieldstone house has a dignified, Federal-style look. Through the mid-1800s the house served as a parsonage for a Lutheran church several miles away, and it’s easy to imagine a clergyman long ago hitching up a buggy to go tend to his flock. 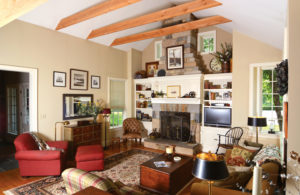 The Parkers were living in a modern house in the area, which they sold in order to buy this home. Both were in the construction business and used their experience to update and enlarge the new home with natural materials to help maintain its historic character. Additions have given it more light and space, but the older parts of the house proudly retain their Old World regional charm.

Like so many other owners of historic homes, the Parkers want their improvements to strike the perfect balance between practicality and preservation. 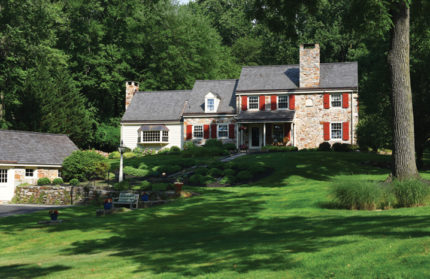 Sheila and Bernie McLaughlin’s home on Brainerd Place near Exton is said to be the work of R. Brognard Okie, and if not provable, it’s certainly plausible. Okie’s Colonial Revival homes dot the Chester County landscape and have their own genre-transcending character—like Shaker furniture—they mostly have a certain handsome rightness about them that more ephemeral styles can’t equal.

The McLaughlins had young children when they bought the house and didn’t want their home to be close to the road. No problem; this house is set well up a hill, with bridges, retaining walls and landscaping that draw your eye up toward it. 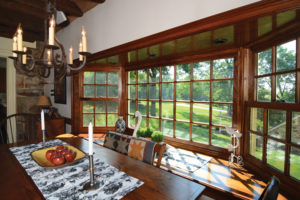 There’s an addition that adds a comfortable family room and breakfast area to the home, with a bay window that offers a view of the grounds.

The furnishings are tastefully restrained. In the living room, chairs and plates on the heavy fireplace mantel evoke the surprisingly colorful furnishings of the 18th century. The dining room is the same type of hard-to-achieve confident simplicity.

“I just went with what I thought worked with the house,” Sheila McLaughlin says, and the house wears the results with a certain dignity and pride. 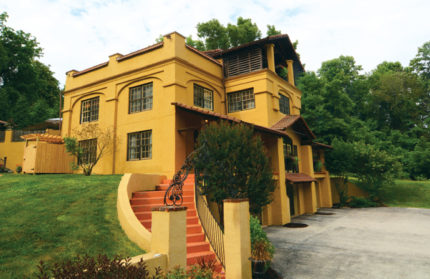 Wendy and John O’Brien’s soaring Mediterranean-inspired home on Yellow Springs Road was built in 1989, and evokes more history and tradition than it’s seen itself. 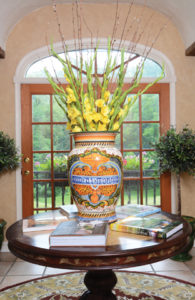 But like all houses, it has a story, and not always a happy one. When the O’Briens first looked at it, on a friend’s advice, it had been painted pink and green for some reason, and the neighbors had some uncomplimentary nicknames for it.

Wendy O’Brien, who’d been an event planner, reinvented herself as a designer and completely redid the interior, concentrating on creating comfortable spaces to socialize and emphasizing the flow between rooms.

The building was modeled on a home along the Amalfi coast. Wendy O’Brien’s mother was Spanish and John O’Brien is a Californian, so it was natural to fill the home with colorful furnishings that make it Mediterranean indoors as well as out. The house is full of surprising touches, from the master bath equipped with island, coffee station and TV to the collection of Porsches in the garage.

The Hunt:  Start “The Day” with the beauty and pageantry of a Chester County fox hunt. Kimberton Hunt  hounds and riders will move off promptly at 9 a.m. from the quaint village of Birchrunville.

Attend a Preview Party at The Washington in Historic Yellow Springs, where they will enjoy fine cuisine and wine and be treated to a preview of this year’s tour.

Drive a MINI for “The Day.” Otto’s MINI in West Chester will provide a MINI for qualified guests with purchased VIP tickets, while supplies last.

Have a private tour of the VIP House, a unique three-level Mediterranean style home built into a hill with a zero-entry swimming pool and cabana, courtyard patio, as well as the homeowners collection of jelly bean-colored Porsches. Gourmet boxed lunch from Montesano Bros. Italian Market & Catering is included.

Tickets cost $100, with 100% of your contribution benefiting The Chester County Hospital.

Tagged under: Gardens, Homes, Tour
Related Articles:
back to top