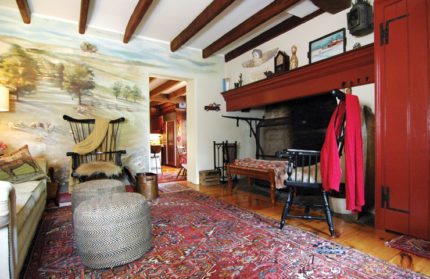 Chester County Day, the longest-running house tour in the country, takes place for the 76th time. And as always, it offers visitors what may be a once-in-a-lifetime chance to visit unique and historic homes and buildings, lovingly preserved and added to over the decades and centuries.

Following tradition, the event is held on the first Saturday in October—this year October 1st. Thousands of visitors from different states and countries will get a chance to appreciate the historic appeal, interest and charm of this region’s architecture and its surroundings.

Organized from the beginning by the Women’s Auxiliary to the Chester County Hospital, Chester County Day directly benefits the hospital. Tour tickets and VIP passes, available on the hospital website and local shops, help support the hospital’s cardiac program. More details are in the Events section of this issue.

The 2016 celebration of Chester County Day focuses on the southwest quadrant of Chester County—sites in the West Chester, Kennett Square, Marshallton and nearby areas. This preview looks at five properties on the tour—four preserved and improved over the years by a series of caring owners, one a newly created interpretation of Tuscan architecture that lends a Mediterranean note to an area known more for its roots in the English Isles.

From views of formal gardens to contemporary art, the preview is just a taste of the ongoing traditions and surprising variety Chester County Day reveals about the region it’s named for. Enjoy this armchair preview!

Anne Watkins says she and her husband Peter were looking for a horse farm in the area three years ago when they heard about Southdown. They sent their daughter to visit first, she pronounced it “enchanting,” and that was that.

The charm is evident enough from the moment you enter a long tree-lined drive that leads upward past a large pond where a swan and her cygnet calmly glide. The main building is a stone mansion, with six bedrooms and six bathrooms, with an unusual mansard roof that brings a bit of France’s Second Empire architecture to this East Bradford Township site. See photo on prior page.

Dating to the early 18th century, the home was originally in the Cope family and was the birthplace of local historian Gilbert Cope. In the 20th century, it was restored by Eugene Gagliardi, the Steak-umm inventor, who owned it before the Watkins.

Now the property features a paved courtyard ringed by outbuildings, some of which now serve as a poolside socializing space. The whole 42-acre site has a relaxed, welcoming beauty for which the word “enchanting” is, in fact, as good a one-word description as a visitor could imagine. 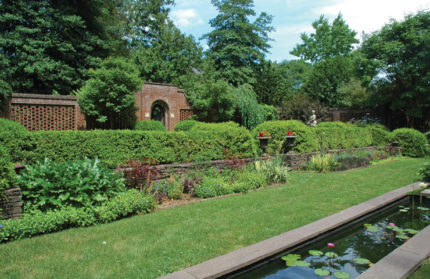 Bruce McNew was looking for “land and character,” he says, to explain what led him to Rosewood, a mansion built in 1861 on Wawaset Road outside Unionville. The original owner was a garden enthusiast who planted specimen trees on the site, some of which still grow there.

The character of the mansion both outside and in is mainly one of formal elegance, leavened with Asian and contemporary art—beautiful vases grace the dining-room table, and a striking European advertising poster is a main feature of the foyer. The family living areas are more relaxed and comfortable, but offer plenty of art to please the eye as well.

McNew renovated the mansion in 1993, but since then has focused on the 34-acre grounds, where the formal elegance deepens with an East Garden and Secret Garden that would look perfectly at home at a certain well-known horticultural site a bit southeast of the McNew residence.

The house is hard to see from the road even in the winter, and of course the walled Secret Garden is out of the question. So Chester County Day is your best bet for seeing this remarkable example of loving attention to a landscape. 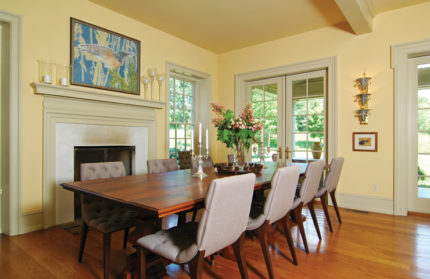 A Tuscan Villa Near Unionville

Chester County may be mostly an area of British-related history and homes, but if you go down the driveway of Wayne and Colleen Simpson’s home near Unionville, you’ll find yourself looking at a vision of Italian architecture that seems to have been put there by some Prospero-like conjurer.

But the explanation is simple enough: Wayne Simpson took a year off in college to travel in Europe and fell under the influence of Italian architecture. The Italians have greatly influenced British and American designers over the centuries—a Renaissance Italian named Andrea Palladio has been called “the father of American architecture”—but Simpson’s work is a more direct celebration of the sorts of historic homes you’d see in a Tuscan countryside.

Built about 15 years ago, it’s designed with courtyards and porches meant to connect inside and outside, also captured in this issue’s cover photo. Add Colleen Simpson’s talents as an interior designer and the inside of the home combines modern comfort and flow among the rooms with a mix of traditional and contemporary art the Simpsons collected or created themselves.

And as much as the surroundings recall the Mediterranean, much of the materials are locally sourced and furnishings locally built. Besides its visual appeal, the Simpsons say the home is a comfortable place to live, work and entertain. 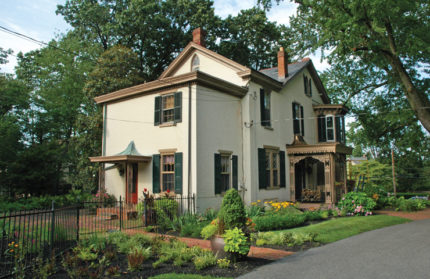 Back in 2007, the owners of the John S. Gilmore house on North Union Street in Kennett Square called real estate agent Matt Fetick to help sell the historic home, built in 1866. Fetick already knew about the house, and he told the owners he’d be right over.

But he didn’t want to sell the house—he wanted to buy it. Within 15 minutes they had an agreement; within an hour Fetick had gone back to the office and written up a contract.

The large mansion is often called “Robinhurst,” and was once the home of banker and ornithologist Charles Pennock. It has a number of features derived from various architectural styles, but “graceful dignity” might be as good a general description as any. Fetick says its design shows a turning away from the more profusely decorative Victorian styles.

Although Fetick (the Borough’s mayor) and his partner David Williams recently undertook a renovation of the first floor, the house has needed only the usual minor attentions since he bought it, Fetick says. The front features a wide lawn, large overarching trees and attractive landscaping. The back has a pool, a carriage house with an open porch for socializing and ornamental gardens. 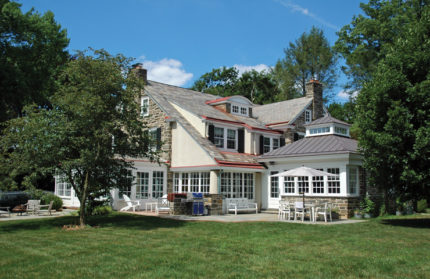 John and Polly Robbins were relocating to the area from Connecticut three years ago when they heard about the availability of a classic center-hall Colonial home built in 1917 on Sconnelltown Road, just outside West Chester. Polly says her husband was in the area, took a look, and that was that. Entirely by chance, they’d learned of the house close to the instant it was listed and were able to act on it quickly.

Since then, the Robbinses have heard from more than one annoyed neighbor who had been waiting patiently for the home to come on the market. It’s known in the neighborhood, in part because it was owned for a time by well-known judge and singer Robert Gawthrop III.

And VIP ticket holders are invited to tour this special property on The Day. Soon it will be open for other events—dinners and small weddings.

The Home: The home has a certain old-world dignity about it, but inside it also has an expansive, open feel. Some renovation work was done by Period Architecture, enclosing open areas and adding a mudroom and spectacular kitchen.

The ground it occupies is level, open and surrounded by trees that screen it from the road.

There are musicians and artists among the Robbins family members, and the furnishings reflect that influence.

And as in many traditional homes, the more modern elements complement and add interest—it’s the best of both worlds.

VIP Tickets: VIP ticket holders also enjoy a special Preview Party with the Tour’s homeowners at Vickers Restaurant, a chance to tour for the day in a Mini from Otto’s Mini of Exton (while they last!), and a gourmet boxed lunch prepared by Montesano Brothers Italian Market and Catering.