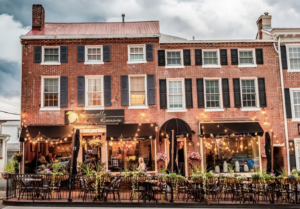 West Chester’s reputation as a dining destination was built in part on the quality of its restaurants, and no new-ish eatery has added as much pizzazz as Andiario. It’s on all the Best Of dining lists, including being the only suburban spot on Philly Mag’s top 50, and rightly so. The creative use of local ingredients produces an innovative and ever-changing seasonal menu that makes you want to peruse it for the pure pleasure of savoring each dish described. These are the meals you want a master chef to cook for you—no need to make pheasant and wild mushroom tortelloni with brown butter and sage at home. Chef Anthony put his name on his restaurant, and his cooking put it on the area’s culinary map. And it’s right here.

We’ve loved watching whatever Chef John Brandt Lee was up to—his restaurant on South High Street, experiment in Downingtown, hip Bar Avalon on East Gay Street. Wherever he was, there followed great food and hospitality. So, when he started getting even more creative during recent months, we amped up our applause. Pay It Forward Cards (fundraiser for local schools, plus a surprise for strangers), Pay What You Want Dinners and other fundraisers for Chester County Food Bank, 30 free turkey dinners for deserving families, along with Facebook and TikTok videos of DJ-ing and dancing all capture one of the hardest working restaurateurs in town. He’s a big reason we support independently owned restaurants.

It might be the most historic restaurant in our area. Housed in the 18th-century stables of the Marshallton Inn and once a common stop on the road from Pittsburgh to Philadelphia, the building was converted in 1978, unearthing in the attic a portrait of four dogs by a 19th-century painter. In 2006, Chef David Cox, took over the restaurant, returning from stints at the Waldorf Astoria, Picholine and Artisanal, among others. Dishes such as charred octopus and pumpkin-seeded scallops created a faithful following. By the fireplace in the bar or outside on the patio during warm weather, sometimes with live music, the atmosphere is warm, friendly and always inviting. A special gathering place we dubbed the “best of comfort food and haute cuisine” back in 2007.

At the corner of Gay and High Streets, Iron Hill is a landmark in West Chester dining, the second of 20 locations (others in Phoenixville, Exton, Media, Delaware, New Jersey and beyond). It’s our go-to place for celebrations, business lunches or just a pleasant meal. For beers, brewed seasonally and in-house, try Pig Iron Porter, Kryptonite Double IPA and Vienna Red Lager. For food, enjoy burgers, sandwiches, pizzas, salads, tacos as well as entrees like Fish and Chips and Chicken & Baby Back Ribs, plus ready-to-heat meals. Kevin Finn, one of three founding partners, is a major contributor to the West Chester community. We’ll show our mutual support by going back again and again.

If you’re in the mood for a taste of Ireland—for Bangers & Mash, Colcannon Soup, Corned Beef & Cabbage, Shepherd’s Pie—and want to down that comfort food with a pint or two of Guinness (or something else from a list of about 50 beers), you’ll do well to stop at Kildare’s. Or for game day or family gatherings during the pandemic, order takeout—baked pretzels, fried pickles, a country fried chicken sandwich—and enjoy football, soccer (the real football) or rugby on your own big TV. When there’s a new normal, Dane, Steph and their staff will take care of you when you return to your favorite stool at the bar.

Fridays could never come fast enough, especially when it came to end-of-week dinners and drinks at Limoncello. In the heart of West Chester, yet seemingly close to Rome, so many choices to satisfy your cravings. Fresh bruschetta, then a blushing order of penne alla vodka next to flowers at the sidewalk café tables. Maria’s Meatballs or Chicken Limoncello with linguine and delectable asparagus in the dining room. Lip-smacking cocktails—a Limoncello Crush or an Apple and Gin Autumn with cider, Tanqueray, honey and cinnamon—by the bar. The hubbub of laughter and conversation here always warms the spirit, even with their curbside family dinners.

What a special treat it is to have a tearoom in town. When you crave tea sandwiches served on three-tiered trays or scones with lemon curd, there’s a perfect place to go. Set in the historic Lincoln Building, this spot is a refuge where you can savor a piping hot cup of tea, brewed just for you in a lovely ceramic teapot. Baby showers, birthday parties or lunches with old friends here make lasting memories. Catering, Fondue Fridays and other events increase the reasons to enjoy a very civilized occasion in this special spot.

We celebrated when Lorenzo’s moved into the corner of High and Gay Streets, bringing their gigantic slices and 28-inch pies to West Chester. How great to have a bit of South Philly (established there in 1970) in Chester County. The walk-up take-out window has been busy, along with delivery during recent months. The hours are shorter—fewer folks are looking for a midnight slice after hitting the bars. Pizzas, steaks, hoagies, pressed sandwiches—the simple things we yearn for now more than ever.

On a spring or summer day, nothing compares with the view of West Chester from the patio rooftop of Mas. Add in one of its margaritas (10 flavors, 3 frozen), some of its homemade chips and guacamole, and you’ve got a perfect afternoon. If you want something stronger and more refined, check out the tequila menu: there must be a hundred, from Clase Azul Plata to Don Julio 70 Crystal. For dinner taste the freshest, best-tasting fajitas, burritos and enchiladas you’ve ever had north of the border—dine in or curbside pickup. For manana? We note National Margarita Day in February. Start the countdown to Cinco de Mayo!

In a town with so many Italian restaurants, was there room for another? You bet. “Born in Italy, served in West Chester” is what Mercato claims and happy diners back that up. Mercato pivoted recently to offering a specialty menu designed to bring their dining experience to your home, with Family-style dinners (three and four courses, Fettuccine Alfredo, Penne Vodka, Spaghetti Marinara and more) Mercato Deluxe Dinners (Orecchiette with cherry tomatoes and asparagus in a blush sauce) and Cocktails To Go (Mercato Mule, Espresso Martinin). The already lovely patio with string lights, umbrellas, heaters, expanded to fill the block, offering even more space to enjoy a bite well into fall.

Miss Winnie’s is a spot of sunshine—great food, incredible prices and rays of Jamaica’s no-worry attitude. Award-winning Chef/owner Bert’s jerk chicken sandwiches with jicama slaw hooked diners at the start. The tangy mango chutney with a little kick reeled fans in time after time. You can eat in, listening to reggae music and sitting next to tributes on the wall to Bob Marley and Miss Winnie—Bert’s mom, whose Jamaican recipes were gold. Or order take-away, although the heavenly fried plantains will likely be devoured before you reach home. To eat here is to be happy. One love!

Iconic family restaurants add something special to our area, so we were excited when Delco mainstay Pica’s (opened in 1956, after moving from West Philly) came to West Chester in 2017. Yes, there’s a full Italian menu with classic apps, pastas and specialties, but it’s the square pies with the cheese on the bottom, sauce on the top served up by three generations that built the legend. Tina Fey fed that legend when she shared slices with Jimmy Fallon on TV in 2014. In 2020 a new audience was introduced to the pizza when Barstool Sports president David Portnoy gave his one-bite pizza review—with a respectable 7.8 rating. Yep, it’s on most pizza life lists, and it’s right here.

We’ve searched some far-off places for the ideal steakhouse—Kansas City, Fort Worth, Buenos Aires to name a few. But none was better than Pietro’s right here in downtown West Chester. With low-light setting the mood, an ice-cold Bombay martini to sip, after a luscious appetizer of lump crab, the bone-in ribeye is presented, seared on the outside, pink inside. It is succulent, juicy, magnificent. Founded by Marisa Giunta—great-granddaughter of Pietro—who works along Sean Powell, the Executive Chef, Pietro’s offers date-night level dining, even with take out. Serving the community for 80 years.

After sleeping late on Saturdays, wander into West Chester and Roots Café where a delicious brunch is always on the menu. Eggs Benedict—with creative, seasonal twists of lox and spring greens or fall sweet potato rosti and avocado salad—and mimosas stretch a lazy morning past noon. Whether you relax indoors at a homey wooden table next to a painting by Chester County artist John Hannafin or at an outdoor table by herbs growing in the sunshine, the stacked Roots burger or salads of fresh local vegetables and greens were worth lingering over. And another reason to love dining in the Borough.

The full name of The Original Spence Café and the fish on the sign hint at the history behind this charming BYOB now on North High Street. There were other versions, but always with a strong seafood selection and mastery in the kitchen under Chef Andrew Patten. The New American menu lets you choose soul-satisfying options like short ribs or heart-healthy seafood, all prepared to let the ingredients shine. During the pandemic, only dinner is available with catering coming soon and special weekly curbside menu offering several options—often including their beloved crabcakes. Enjoy the seafood, even it it’s not Friday.

Roberto Guadagini has been welcoming you since 2002 to Teca. We might have gone just for its renowned wine list. Fancy a bottle of Chateau Cheval Blanc? It’s $2900. More affordable? The Tenuta Casali di Bibbiano, made in the Tuscan vineyard of Roberto’s dad, Alberto. For now, we focus on the food. Some Langostini Grigliate (grilled prawns), Rollatini di Melanzana (eggplant, spinach and cheese) or Linguine Allo Scoglio (mussels, clams, calamari, shrimp and spicy San Marzano sauce) Half-way through the menu, we realize that we better practice our Italian. One thing is certain: we are well past spaghetti and meatballs. And with another location in Newtown Squares we have double the love.