To Queue, Or Not to Queue?

Every month thousands of craft beer drinkers spend hours in line waiting for the newest beer release. But why? 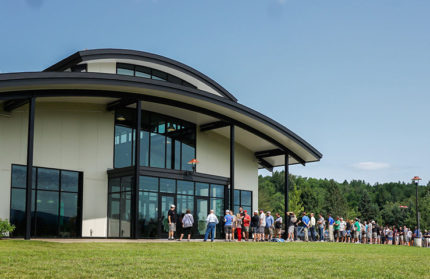 I’m Chadd from Breweries in Pennsylvania, and I’m a craft beer fan.

And yes, I’ve spent countless hours in line waiting for a new beer release. It’s something I admit with a bit of shame. Not because I think waiting in line for beer is wrong—if you’re a line veteran, more power to you. No judgment.

Instead it’s because if I looked at craft beer a few years ago the way I do now, I’d have all those hours back-—better used for drinking more great beer.

So, what is it about craft beer that inspires fans to stand in the long lines? And why exactly do so many fans queue up?

Well, it’s complicated. So, let’s explore how and why the craft beer line culture came to be.

It’s All About The Online Presence

A while back I spent time with Dennis Hock, owner of Strange Roots Experimental Ales in Pittsburgh (formerly known as Draai Laag Brewing). While sampling vats of his delicious wild ales, he told me something that’s stuck with me—beer is no longer made in the tank; it’s made on the keyboard.

What does that mean, exactly? In short, it means it doesn’t matter how good a beer is if it’s marketed properly and builds hype online. Do that, and plenty of people will come flocking.

Perhaps the most notable local example of this theory is Tired Hands Brewing in Ardmore, PA. Show up to any of their can releases and you’ll see hundreds of craft beer lovers lining the street around their Fermentaria. In fact, it’s gotten so intense that the beer brotherhood show up hours before the release with lawn chairs in hand to reserve their spot. About 800 lined up during their popular Milkshake IPA frenzy.

Tired Hands beers are talked about so often over social media that it doesn’t matter what that week’s release is—the chairs will be holding spots long before release time. Long lines will even form for a beer that’s never been released before—meaning those in line haven’t even tasted the beer before, yet there they are, waiting.

The lines look like a new iPhone release. Or a beer flash mob.

Beer Is Not Just For Enjoyment. It’s A Currency. 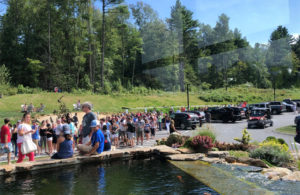 If you read a social media post of some beer releases, you’ll find the letters ISO/FT throughout the comments section. In the craft beer world, that translates to “In Search Of” and “For Trade,” meaning the commenters are in search of that beer and have another beer they’d like to trade for it.

Some believe that’s where craft beer is headed—beer used as a currency meant for trading rather than for enjoyment. The craft beer trading world and fan base have gotten so big there’s a page on Reddit called “beer trade” where tens of thousands of active users log on to trade beer.

When consumers get their hands on one of the coveted beer releases, they can name their price for what they want in trades. Sadly (at least to true beer lovers), too many customers spend hours in lines with the intention of off-loading the beer shortly after getting it rather than enjoying it.

Does A Line Mean Good Beer?

The short answer is no. As a craft beer veteran, I can confidently say not all beer that folks line up for is the best version of that style. And sometimes the beer just isn’t good at all.

I’m sad to admit I’ve waited in my share of lines where the beer has been brewed poorly but released anyway. And then there are beers that aren’t even the best version of their styles but still generate long release lines. The good news is this is rare, but it still happens.

Now when I’m asked about beer release lines, my response is always the same. There are so many great breweries around that you can visit another place instead—Stickman Brews in Royersford, Root Down Brewing in Phoenixville, Levante Brewing in West Chester or Conshohocken Brewing in Phoenixville, are good options. Walk up to their cooler and get a beer that’s just as good, if not better, almost anytime you want. No line, no wait (disclaimer: Levante may have lines for some releases). The entire transaction can take just five minutes, not hours.

Lines don’t always equal quality. Remember it’s the hype that draws the attention and the lines.

So, Why Do People Show Up? 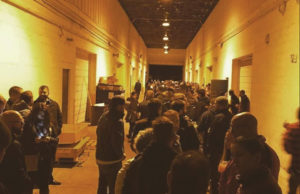 In a word, or an acronym, FOMO—“Anxiety that an exciting or interesting event may currently be happening elsewhere, often aroused by posts seen on social media.” From the Oxford Dictionary, added in 2013.

FOMO, or fear of missing out, causes too many beer drinkers to flock to beer release lines. Not because the beer is the greatest version of that style of beer, but because beer drinkers don’t want to miss out.

From the definition, the phrase “often aroused by posts seen on social media” is probably the most telling part. Craft beer is no longer merely for personal enjoyment. It’s a race to have the best or the newest, with bragging rights on Instagram.

In an Instagram society, where everyone is chasing likes, the craft beer industry is not immune. Value is determined by having the latest release for everyone to admire. Or raising the number of Untappd check-ins (a beer app), like a hot stock.

Where Do We Go From Here?

In the end, it’s hard to blame the brewers for this culture. The idea of starting a business is to be profitable, and lines equal sales. Yet some breweries are stepping in to squelch the lines, using online presales and pick-up windows or selling a limited number of advance line tickets. Or others, even uber-popular Tree House Brewing Company in Monson, MA, known for some epic release lines, give short notice for certain releases to stymie the long lines.

So what’s next? I think the lines will continue. Certainly as long as the trading community is strong, fans will show up.

But I have a request for the craft beer industry—drop the FOMO. Help the beer brotherhood reclaim the time spent waiting for beer to invest instead in enjoying beer.

I feel lucky to have been able to do that. Mostly because of the work I do with the Breweries in PA website, I’m visiting so many new breweries I don’t have time to wait in line. But starting a beer website isn’t the best answer for most beer fans.

Instead, I ask craft beer drinkers to expand their horizons. Resist getting sucked into the FOMO. Break the cycle. Trust me, you’ll be well rewarded by hopping out of line and using that time to explore the many offerings at quality breweries near you. New ones are opening all the time. Check them out. You’ll be glad you did. Cheers!

Chadd Balbi, co-owner of Breweries in Pennsylvania, the largest digital media site dedicated to PA craft beer, started his journey to craft beer like many others. Younger years consumed with mass produced beer at cheap prices, slowly opening up to lagers and amber ales, and eventually jumping head first into the craft beer scene. He combined his passions for writing and documenting the craft beer industry into BreweriesInPa.com.

Need more places to crack open a cold one? Worry not, because October is packed with events for you to attend and discover your new favorite brew. Try out a beer crawl, a beer fest or even a beer fundraiser. Oktober is officially here! Cheers.

Tagged under: Beer, brewery
Related Articles:
back to top