Shelby Shack is a Room of Their Own

Everyone deserves their own space.

Everyone deserves their own space, especially when the pandemic pushed us together for a tad too much togetherness.

Local teen twins, Theresa and Catherine, decided to build their own space and created a Tiny House in their backyard. Shelby Shack, as they call it, withstood December’s snow storm and was a bright spot with its holiday lights and decorations.

We asked the twins to tell us more about the experience of building their own special space.

Why did you decide to build your own space? 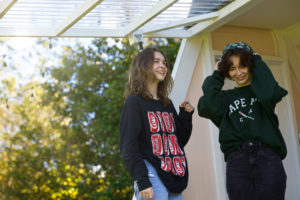 We love tiny houses and have thought for awhile about building one of our own. We couldn’t do much over the summer because of COVID, so we decided this was the perfect time. With the uncertainty of the upcoming school year, we thought this place would be great if we still had to attend school virtually.

Plus coming from a family of seven, we needed the extra space! We’d struggled with distractions on Zoom meetings in the spring, so we thought more space would help everyone. And it did!

What experience did you have building things?

We were very inexperienced before this project. We like DIY projects, but neither of us had attempted anything this big. We had a lot of help and definitely learned a lot. We totally did not anticipate it taking as long as it did! Taking four months instead of 90 days.

Our dad helped us, but he’s also not experienced in everything. So we had to look online, watch Youtube videos, and get advice from other people. Our dad’s friend Dan works in construction and helped us one day on the base of the A-frame. We borrowed tools from our Uncle Justin, and our Uncle Brendan put in the electrical for us—not a good idea for novices to tackle electrical!

Why did you decide on a tiny house? 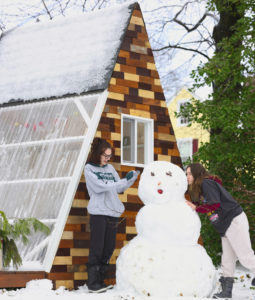 We wanted extra space and a tiny house just made the most sense. We thought an A-frame would be cheaper than other designs, and we found one by tiny cabin designer Deek Diedricksen and just loved it. The swing wall really opens up the place when it’s warm. And the shelf wall was something we knew we wanted as soon as we saw it.

It took a lot to convince our parents to let us do it. Once they understood the benefits, they were pretty much on board. Our dad got really excited about it the more pictures and videos he saw of other tiny houses. Our mom was the hardest to convince. But it worked out in the end!

Where did you get the money for this project?

The original budget was $1,000 for the basic components, using some repurposed materials. Because of COVID, building supplies were harder to get, which drove up prices. In the end, our total budget was around $2,000.
We used mostly our own money we’d earned from babysitting and internships from the summer. Our grandmother pitched in, too.

How can our readers learn more about your project?

We really wanted to share what we did. We took photos and video on our phones during the building process. And we also built a website, ShelbyShack.com, with all the information—stories, perfections, mistakes, problems and solutions—laid out in 10 steps. It’s all on our website! 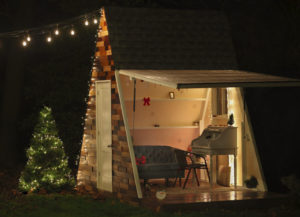 What was your biggest fail during the process?

While people were working on the garage roof at our home, we asked them to put on the roofing for Shelby Shack, which they did at no charge. But the roofers used normal-length roofing nails, which were too long for our design and poked through the plywood walls. The inside of the cabin looked like a torture chamber with all the sharp pointy nails!

We thought the help would save us money and time, but ended up causing a huge headache. We had to borrow an oscillating tool to cut the nails flush to the wall, but it took so long we didn’t cut them all. Some at the very top are still there. What a long and annoying process …

We can do anything! Just kidding. Obviously not, but we can do much more than we think we can. You don’t know what you’re capable of until you give it a shot. 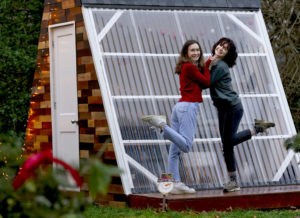 What’s your next project?

Theresa: I’d love to try a van conversion build, where you turn a passenger van into a mini-mobile house. That would be really fun.

Catherine: As a high school senior, I’m applying to colleges, so that’s my focus now. Along the way I definitely want to do other fun small projects, though!