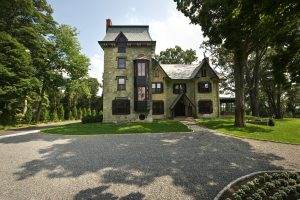 Not long after John Rudibaugh and his wife, Doris, bought their new home in 2007—a serpentine stunner known as Edgewood on Birmingham Road—one of their new neighbors invited the couple to dinner. Rudibaugh took it as a friendly gesture, which it was. But it was not only that.

When the couple arrived, John saw there were about 30 people there, all local landowners themselves. The reason he and his wife were there, his neighbors told them—in what Rudibaugh makes clear was a quite serious tone—was so the group could tell the newcomers they considered themselves stewards of the area’s historical heritage … and they expected Edgewood’s new owners to be stewards, too.

In the intervening years Rudibaugh has shown the neighbors they had no cause for concern—his efforts to renovate the house speak for themselves. The once-neglected property is restored now, after long and hard work by a talented team and the new owners.

Edgewood is now a landmark of architectural and historical importance and a comfortable, livable home.

It was a long trip back to its current grandeur for Edgewood.

Rudibaugh had been looking for a historic home for years—ideally an old farmhouse with some land and unspoiled views, and in particular a place where his 13 grandchildren could play. He looked at many properties, but had his eye on Edgewood. Finally the stars aligned, and a deal was struck.

The grand house had been built for the Sharpless family in the middle of the 19th century. It was a large, symmetrical house in the Gothic Revival style, built of serpentine stone from a local quarry, with substantial walls about two feet thick.
Serpentine (technically “serpentinite”), a striking greenish stone, isn’t found everywhere, but Chester County is one of the places where it’s relatively common. (Once you become aware of this distinctive green stone, you’ll notice serpentine buildings dotting the county, including on West Chester University’s campus.)

But back to the Sharpless family, a prominent local Quaker family. From what he’s been told by experts in local history, Rudibaugh is confident the house was one of many stations in Chester County on the Underground Railroad. In the course of the renovation, a closed-off room in the lower part of the house was discovered, and in it plates and other artifacts were found suggesting it was a hiding place for fugitive slaves.

From Mechanical to Muntins

Early renovation efforts also uncovered the extent of the work the house needed. “I had no idea what I was going to get into in rehabbing this place,” Rudibaugh says.

The goal was always to take a period house and bring its heating, electricity and plumbing systems up to modern standards, and the Rudibaughs knew that would be a fairly extensive project. When they invited friends over for a party in 2009 to show them the “before” version, visitors discovered the fact that, frankly, the house was quite cold inside.

The existing heating systems ran on coal and oil, but only three of the four oil furnaces worked and the coal source didn’t work at all. The Rudibaughs redesigned the heating systems literally from the ground up, with heat pumps, radiant heat and a German boiler system. 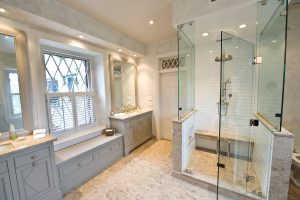 Major structural changes—opening up smaller rooms, widening doorways, repairing rotted material—were also needed. Most of the construction work on the house was done by Pine Street Carpenters, Inc., with Bill Dolan heading the project. “I can’t say enough for Bill’s level of detail and his research,” Rudibaugh says. “He had really done his homework.”

The owners found a specialist—from catching an episode of the TV show “This Old House”—to modernize the chimneys so the many fireplaces could be made operational. Unfortunately the expert’s technique was unfamiliar to the township officials who had to approve it, and a great deal of persuasion was needed to get that step done.

Finally the heating side was taken care of, so that item was checked off the long list.

The electrical systems were updated too, with computer controls that could learn the Rudibaughs’ habits and adapt to them. Another check on the list. The old kitchen was small by modern standards, so they opened it up, and checked that off as well.

One of the many characteristic Gothic Revival designs was woodwork crisscrossing the windows, recalling the diagonal muntins that held small panes of window glass in previous centuries. Like much of the rest of the woodwork in the house, this had been neglected and needed to be refurbished. “It hadn’t been touched for years and years,” Rudibaugh says.
The same was true for the extensive French ironwork. This too was all taken care of, and more and more the house emerged from the bad years and began to recapture its former elegance. 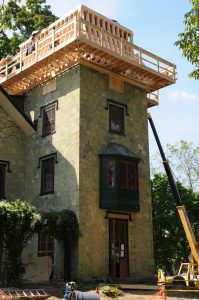 One prominent feature of the house, visible from Birmingham Road, is a four-story tower on the east side with some history of its own. In the later years of the 19th century, the house had been acquired by the Biddle family from Philadelphia. One owner was unenthusiastic about seeing her servants and engaged an architect to add a Gothic-style tower in which the help could live and work while troubling her with their presence the least amount possible.

Rudibaugh and his own architect, James Bradberry, thought it made practical and aesthetic sense to cap the tower with a Second Empire-style mansard roof, in part to hide some of the mechanical features. Many historical homes in the area have similarly blended stylistic elements over the years as fashions and needs changed. But again, the township authorities took some persuading about this variation to the dominant Gothic Revival style.

Large, spiky finials are another prominent element of the rooflines, and the list of additional Gothic Revival elements is a long one in a house that bristles with visual interest. 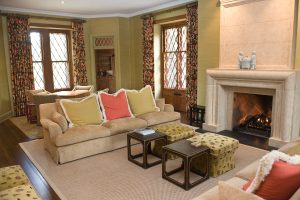 The interior of Edgewood is equally appealing, decorated with a casual elegance. From the front door you enter an expansive hall that runs all the way to the rear of the house providing a view to the grounds beyond. On your right is a formal dining room and the thoroughly modern kitchen, with a living room on the left and the tower to the front of the home.

The first floor is full of old-world touches like coffered ceiling in the dining room, but the furnishings, while harmonizing completely with their setting, have a cooler, more restrained modern air compared to the riot of ornate detail you might have seen everywhere in, say, 1890.

Up the elegant expansive stairs, which continue to the third floor, there’s an inglenook on the landing, and then bedrooms and baths complete with fireplaces. One room is devoted to dollhouses, this being, after all, a house meant from the beginning to be welcoming to all generations of the family. 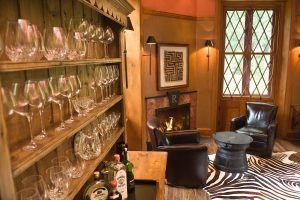 In a part of the county where the 1777 Battle of Brandywine was fought—Lafayette is said to have been wounded just east of the property—historic buildings and landscapes are highly valued and strenuously protected. And Rudibaugh, no longer the newcomer, has Edgewood as it is today to demonstrate his commitment to those neighbors he dined with years before. “There’s a legacy here,” he says.