What plans do you have for your spring garden?

One of the questions we get asked most frequently at Chanticleer is, “how do you get your ideas?” It turns out this is also one of the most difficult questions to answer. Ideas pop up from everywhere—from nature, art, other gardens, travel, even dreams.

So, how do we advise other gardeners? While there’s no secret or shortcut to finding inspiration, gardeners do have a few muses in common.

Perhaps the most popular and most valuable resource we have is other gardeners. We’re tremendously lucky in Greater Philadelphia—America’s Garden Capital—to be in the company of so many public gardens and arboreta and so many capable horticulturists—professional and amateur alike.

Regardless of the level of experience of other gardeners, conversation benefits us all. Everyone has grown something that someone else hasn’t, discovered a winning plant combination, or learned a valuable lesson in a failed growing technique. I’ve never met another gardener I couldn’t learn something from. In a trade that’s often solitary, these conversations count. 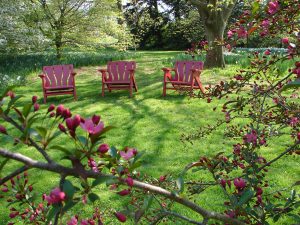 While visiting gardens near and far, you’ll inevitably be inspired to try out a newly discovered planting scheme at home—whether it’s from a friend’s nearby vegetable garden or from a garden discovered during a trip to the Mediterranean.

There’s a lot of value in expanding your skillsets and endless pleasure in growing new kinds of plants. But it’s worth pausing to evaluate your own expectations before you experiment.

For example, that Italian courtyard, charming as it is, performs very well in its own special climate, but the Mid-Atlantic region is a far cry from the land of rosemary and the columnar cypress trees. Many plants native to that area might not succeed here. In spite of best intentions, the more exotic the flora of these postcard gardens, the more trouble you’ll likely find recreating it at home.

That said, don’t be discouraged!

If not the plants, what could you borrow from that courtyard? Maybe a garden design with similar geometry, the same old-world formality and atmosphere? Or maybe the open feeling of scrubby garrigue (a low-level scrubland of plants) and strong vertical accents?

The point is a garden doesn’t need to be replicated to be honored. A minor similarity may be all that’s needed to evoke the memory and spirit of place.

After all, it’s the combination of references that makes a garden personal rather than referential. Just as a person is a sum of many experiences, a garden may be the botanical equivalent—a quilted assembly of woodsy walks and meadowed voyages. It may contain cuttings or divisions from the very gardens that inspired it. These elements will soon transcend their influences to become a fusion of their own, an aesthetic seemingly premeditated rather than a jumbled assemblage.

Looking Beyond the Plants 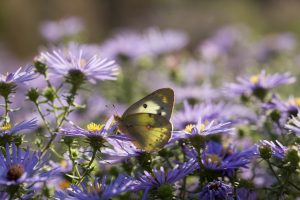 It’s a simple enough concept to design gardens for personal pleasure. But who else is enjoying them?

Lately many gardeners are finding inspiration not directly from their plant palette but rather from what that palette brings. Insects and the birds that feed on the plants invite a kaleidoscope of hues and patterns and a symphony of sounds to the welcoming garden. This flurry of biodiversity, the relationships involved, and the stewardship they represent have mobilized new factions of gardeners and added levels of enjoyment to home gardening.

Yet, all gardens are not created equal. Nursery booms of recent decades have favored hardy exotic (non-native) plants—in part because they’re more resistant to insects. These non-native plants have proliferated throughout many local suburbs without improving the native ecosystems.

If you’re planting for habitat, native plants are usually the best choice for attracting and sustaining wildlife.

Regardless of your plan for the garden, it’s best to make some effort to assure that the concept looks at home in its new context. This can be done through the same techniques used in adapting an inspiration garden.

For instance, if you’re adding an herb garden to a setting that’s mostly sun perennials, giving its bed the same shape or contour as the perennials (a borrowed gesture) will help integrate the bed into its new setting.

Similarly you can accomplish the same mirror effect by using repeated materials. A new structure can be better incorporated into the garden by building it from the same wood that’s been used elsewhere in the garden. And a new planting might be softened by poppies that have self-sown elsewhere in the garden. Little consistencies like these give the impression that the whole garden has been painted with the same brush and that it bears the same moment of conception, lending both age and familiarity to novel forms.

As with many artistic endeavors, one of the joys of innovating is discovery. As you express yourself in the garden, you’re also charting a course of progress, both of intention and implementation. There are skeletons of ideas and concepts in your garden, vestiges of travels and gifts from friends. These artifacts are markers of an understanding of place, of discovering the soil that builds and the life that populates it.

Inspiration is the idea that feeds itself.

Chanticleer is a dynamic garden that’s ever changing. The staff welcomes visitors to visit often, observe the garden through each season, and ask questions. To learn more about Chanticleer visit the website. Open March 30 through October 3, Wed. through Sun., from 10 to 5, and until 8 p.m. on Fri. evenings May through Labor Day. 786 Church Rd., Wayne. ChanticleerGarden.org.