Home of the Month: Springdale Farm

Over 300 years of history with just two families 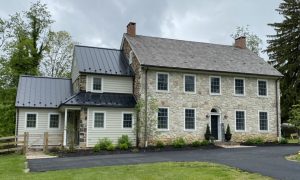 Many farms in Chester County have a long history and storied past. But few can compete with Springdale Farm in Pennsbury Township.

Yes, there’s a Wikipedia entry and a few different names throughout the years (Elwood Farm, and its informal name, the Mendenhall farm). Plus newspaper stories of the dairy farm and equestrian center’s rise and fall during the turbulent times around 2007.

Yet what might be most remarkable is that in the 300+ years since the original 2,000-acre land grant from William Penn, with whom the original owners traveled from England, only two families have called this place home. The Mendenhall family lived at Springdale Farm for eight generations and were one of the first families to settle on the west bank of the Brandywine River. And for less than five year, the Keller family created their dream home there.

Recognized as the oldest continuously run farm in Pennsylvania (National Register of Historic Places designation in 1973), Springdale Farm has been lovingly restored and brought back from “demolition by neglect,” as a local newspaper described its sad state.

From Neglect to Showhouse 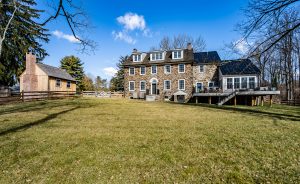 Springdale Farm—which actually does have springs surrounding it, as well as a converted springhouse—is now 11+ acres of mostly flat open land dotted with towering hemlocks, sycamores and other old-growth trees. “Four acres to the front of the property are under a conservation easement,” says owner Melanie Keller, as are portions of several neighboring properties in the lightly developed rolling hills of southern Chester County.

A stately three-story historic stone farmhouse, with a limestone façade and fieldstone sides, is the centerpiece of the property. The four-bedroom, four-and-a-half bathroom home is comprised of the original 1748 structure, a 1836 expansion, and the Kellers’ modern addition.

Several outbuildings—including a one-bedroom tenant house, charming she shed with fireplace and original beams, and the ruins of a massive stone bank barn—are also on the property.

Today’s picture-perfect Federal-style home is a far cry from the neglected building the Kellers visited after a two-year search for a new home and another property to restore. “We’ve restored about 15 to 20 properties together,” says Melanie, referring to husband, Kevin, who is often the general contractor. 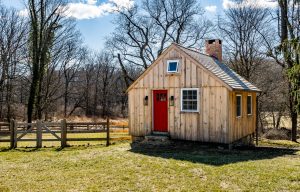 And that experience is why the couple was willing to enter the shell of the home. A strong storm may well have finished the demolition by neglect, but for the Kellers intervention.

Melanie remembers, “The whole house was boarded up. We had to remove boards to get in the door. There was no light inside because the windows were boarded, too. Vines were growing through the cracks, inside the house.”

A visit to nearby Oakdale—a “twin” property with a similar structure that had been restored “to the nines”—confirmed their vision of what the house could be. And the level, well-preserved floors were evidence of a strong foundation of the home.

After waiting a month, the Kellers made their offer and bought the property in late 2017. Another year was needed to secure permits. Then West Chester-based architect Dale Frens developed the design, Dan Smucker did the construction, and Chris Lapp of Buena Vista Restorations handled the extensive masonry work, as Kevin oversaw the project. The Kellers moved into their dream home in late 2019. 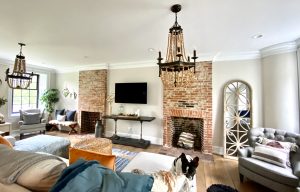 “I wanted to create a comfortable farmhouse feeling,” says Melanie, walking through the center hall now filled with natural light. “Keep the best of the old, mixed with the new,” she continues as she points out exposed stone walls, preserved beams, granite thresholds, archways and other details of the original structures.

To the right is a spacious, modern living room, with twin brick fireplaces, spanning the width of the house. The dining room, with another fireplace, this one made of stone and huge, is to the left. Gorgeous reclaimed wood floors throughout most of this level were made from wood taken from the farm’s former barn. Original floors remain in the 18th-century portion of the home. Windows in thick walls display the characteristic slant of colonial design. 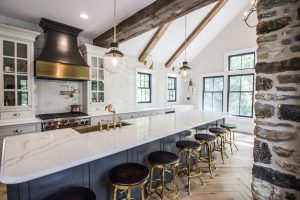 A new vaulted-ceiling, east-facing kitchen and family room are flooded with light. This stunning space is anchored by a 15-foot quartz island—the dream of any cook, along with Wolf range and Sub-Zero fridge—and overlooks the large Trex deck and views of the property.

A second bedroom and bath are on the second floor, with two additional bedrooms, both with en suite baths, on the third floor.

Now completely restored, historic Springdale Farm is ready for its third family to call it home.