Whether in England, France or the Main Line, there’s not much mistaking a manor house. 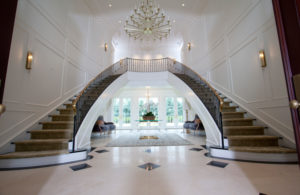 Whether in England, France or the Main Line, there’s not much mistaking a manor house. Even the driveway, like a European boulevard with the courses of brickwork and shrubberies that line it, leads your eye irresistibly to the home itself, where the facade spreads outward from a four-columned portico, the roofline rising and falling over the projecting wings with turret-like sections standing forward like sentries.

Manor houses were meant to be noticed, to stand above all other buildings with their grandeur and beauty. They were the homes of the aristocrats over the centuries, the residential top of the food chain, meant to bowl you over and powerfully impress you from the first moment you saw them.

This architectural style had certainly made an impression on a client who came to Wayne-based architect Warren Claytor some years ago with a vision for a new home based on the manor houses he had seen in his travels around England and France. The client had also been struck by some of the architecture he’d seen while pursuing his education in Philadelphia and Boston. And he had images to illustrate the sort of buildings he wanted his new home to resemble.

Looking at the images and discussing them with the client, Claytor decided the Georgian style was the best way to realize what the client was envisioning. Named for the first four Hanoverian kings of England, Georges I through IV, Georgian was the predominant style of architecture in the 18th century in both England and the Colonies.

Unlike some architectural genres that are rather strictly defined, Georgian varies widely in the features it uses, and has more to do with a certain effect: formal, symmetrical, elegantly restrained exteriors are its hallmark. This style looks back to Greek and Roman architecture as revived in the Renaissance.

If the 18th century seems to have a certain grandeur today, Georgian architecture has a lot to do with that. Growing industrial strength at home and military might abroad were making England a world power, and on both sides of the Atlantic the increasingly grand buildings going up reflected that rising confidence. 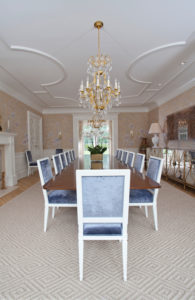 Some Georgian manor houses are long and rectangular, with a flat facade, what Claytor calls a “boxcar” look. But given the style’s freedoms, Claytor opted for more visual interest in this project.

The view from the home’s front shows the central part of the facade flanked by rounded, turret-like extensions with wings extending beyond them. This made it possible to have rounded, sunlit rooms that could be used for an office or cheerful breakfast space.

The exterior of the home is brick, with traditional limestone detail on the cornices and quoins—the alternating large stones used in traditional construction to reinforce a corner—along with tile roofing.

The owner opted for a relatively restrained approach to landscaping, with mostly open areas lined with shrubs along the perimeter.

Like many other homes inspired by traditional styles, there’s an accommodation with modern ideas about how homes ought to look and be used in the interior. Claytor says within the home’s Georgian-styled exterior is a modern American floorplan that’s open and geared to today’s ideas about how people live and move around in a home.

The interior includes a few traditional features like timber framing by Hugh Lofting over the swimming pool, but for the most part the color is white and the ambiance is airy. The owner says this is no accident—he wanted the interiors to resemble Europe’s modern museums, with rooms open and high-ceilinged, drenched in light.

That concept can be seen in one of the home’s eclectic sources of inspiration: the Fisher Fine Arts Library on the University of Pennsylvania’s campus. Designed by Frank Furness, the library features a four-story reading room with large windows that furnish light to the other rooms inside. The Main Line home’s library uses the same idea, with light wood paneling to help brighten the atmosphere (see the cover photo).

Modernity also informs the home’s functioning, and its aesthetics too. The owner told the builder, Michael Haines, the president of Waverly Custom Homes, to strive for low energy usage. The zoned heating and cooling can be controlled with a smart phone or tablet. There’s geothermal technology and the most advanced insulation available.

Where appropriate, modern materials are used: the traditional quoins are actually made of “cast stone”—powdered stone in a resin composite—and the clay tile roof, built to “outlast us all,” Haines says, has a special glazing designed to quickly take on the age-appropriate appearance  for a house built a couple of centuries ago. 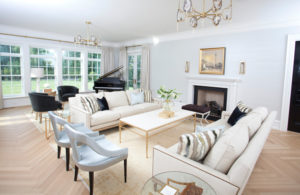 Although it draws from faraway times and places, the house embodies some local history as well. The sports-enthusiast owner wanted a basketball court among the other amenities, and while buying the materials from Harriton High School in Lower Merion, Haines found the bleachers were available as well. These were 20-foot mahogany boards, he said, that now form the bar and walls of an elegant space where friends can gather for drinks.

The natural world is also part of the design. Many rooms include ample doors and windows opening on the greenery outside, and balconies and porches open it up even more.

Claytor says porches were a prominent feature of fine homes in the days before air conditioning. Today they’re a place to enjoy the outdoors and the fresh air, he says, a place to keep the family together and connected. Accordingly there’s a large, well-furnished porch facing an interior courtyard. Atop it sits a balcony from which to enjoy the hilltop view of the surrounding area.

It’s no accident that the house enables you to appreciate the surroundings. Claytor is not only an architect; he has a master’s degree in landscape architecture and studied with famed landscape architect Ian McHarg. He’s as aware as anyone, then, that no matter how magnificent and striking a home may be to look at, its residents spend their time looking in the other direction, appreciating a sunset, say, or a rabbit on the lawn one dewy morning.

“We’re constantly bringing the outside in,” Claytor says, “and the inside out.”

Tagged under: Homes
back to top