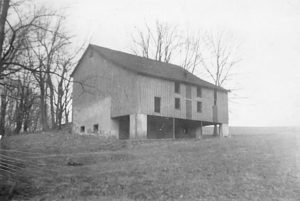 It’s the mid-1940s. An old dairy barn sits in the middle of a vast pasture belonging to the Wood family (of Wawa fame, long before they launched the first Wawa store in Lima). Built in the 1730s, the barn burned at the turn of the 20th century and was rebuilt with timber from the remains of several chestnut trees which were felled because of the devastating blight.

A woman in her late 20s is on the roof of the barn, repairing the roof deck. In a rare moment of frustration, she is tired and crying. Could she and her husband transform this dairy barn into a home? Today this may sound like an HGTV show, but it was not a common project in the 1940s.

Elizabeth “Bubbles” Moore had studied as a nurse, managed a string of watch stations during the war on the Maine coast looking out for U-boats, hunted deer and trapped lobsters, and tended the horses that carried health care workers to visit their rural patients. Her husband, E. Townsend Moore, a veteran of the World War II Navy, was now employed by Sun Oil in Marcus Hook as a shore captain. They needed a home. 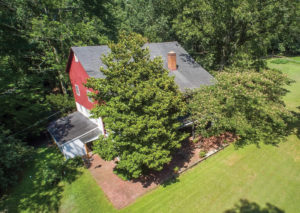 The couple had bought the bank barn on the Wood’s property at the urging of their real estate agent who saw its potential: the country setting, the stream and woods, the 20-inch thick stone walls. The barn’s organic design would allow entry at three levels, afford protection from the north wind with ample sun on the southern exposure, and enable the ground’s cool air to circulate naturally upward in summer. The framing of chestnut, without nails, with mortise and tenon joints, and the broad stall doors could be preserved.

This was a special structure, even though they initially had to shovel out manure from the former dairy barn.

The Moores’ house was an early example of a barn conversion so popular today (see the feature story in this issue for a modern version).

Back in the 1940s, though, on that day on the roof, Bubbles was regretting the decision to undertake the project. The repairs and renovations would take forever, she thought, although later, it would be featured in Better Homes and Gardens.

The first big step, besides clean-up, was to replace the roof boards: a massive task. Next, to install walls, windows, ceilings, floors, heating, plumbing.

Slowly, however, the plan came together. Step-by-step, doing the work largely themselves, the couple created their living space. The first floor was outfitted with yellow pine floors, walls, ceiling, a half-bath, a living room (which served as the original bedroom; see photo below). A kitchen was added, resembling a milk house. 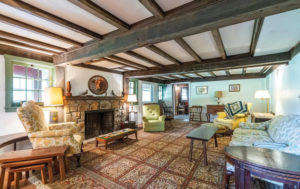 Windows were punched out of the stone foundation. Stone fireplaces and brick chimneys were laid. A long utility room was fitted in the space where cows had taken water and hay.

Townsend, who spent weekends studying woodworking, outfitted the house with furniture and cabinets made in his workshop. Beds, tables, cabinets—many of which are still in the house.

The whole family—including two sons and a daughter—lived on the first level. The ceilings were low, perhaps 90 inches. But the effect was warm and cozy, and there was still about 30 feet of living space towering above to be developed.

During the renovation of the second level, the living space opened up. Once filled with hay, the space became the family’s private living quarters.

Two large sunlit bedrooms, a study and a large bathroom were fashioned on this level. The south-facing wall of the barn was replaced with one about 15 feet back from the perimeter. Running the length of the house, a covered deck looks out on the hillside; beneath is a well-shaded dry-brick patio.

And then there was the third floor. “The bridge” on the east side, where hay wagons once pulled up to off-load, became the third-level entrance to the home. A paneled entry room leads to the center hall with oak flooring. To the east, there’s a master suite of bedroom, dressing room and bathroom. To the west, are two large bedrooms and hall bath. 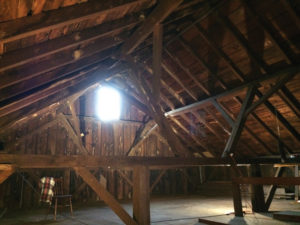 Finally, there remained the unfinished barn loft—a massive space, perhaps 20 feet to its peak, the original chestnut timber framing on display. A brick chimney rises to the roof, which appears solid, although light peers through in several places. Two hay forks, and a track running the length of the roof, loom on the ceiling.

The living space on three levels below is about 4500 square feet. If finished, the attic would add perhaps another 1700.

But it would be another huge project. And one for the next owners.

The home, on land under a conservation easement, was put on the market in 2019 and is still available. Peter Moore, the younger of the two sons, showed me around, reminiscing about life there. For “someone with the interest and means,” he sighs, “it’s really a magical place.”  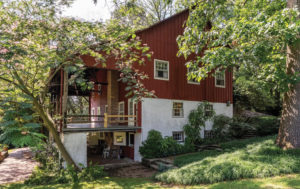 Many may have heard of Bubbles Moore, the colorful character who lived in this early barn conversion. She had lived a full life, only partially consumed with the build-out of her home in the bank barn, where she passed in 2018 at the age of 99. Her pet pig, given to neighbor E.B. White, lives on as a character in Charlotte’s Web.

Bubbles always loved horses and was a member of the Rose Tree Hunt Club, a fence judge at Radnor Hunt Club, an organizer of Dressage at Devon, and named a “regional legend” by the U.S. Pony Club. Also an avid gardener, Bubbles competed for 52 years at the Philadelphia Flower Show, making “niches”—display boxes with flower arrangements as their theme.

Once a tomboy, Bubbles was courageous and energetic, and lived life to the fullest: an inspiration to all who knew her.