Restored and updated for the 21st century 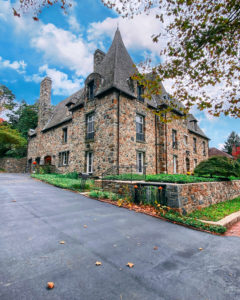 Finding a large family home within the borough of West Chester is no easy task. So to discover an impressive historic home on an acre of land atop a hill, just a 10-minute walk from the center of town, was quite a find.

The home lingered on the market ten years ago, in part, because its state of disrepair—cracked plaster, damaged floors and beams as well as no air conditioning or economical heating—made most potential buyers see it as too daunting a project.

Yet the striking home on a tree-lined street had great bones and great potential. Plus there were golden, unobstructed sunset views from the front of the house.

The current owners spent eight months working with contractors to restore and update both interior and exterior as well as to install geothermal and solar power systems to bring the home into the 21st century in an environmentally conscious way.

So complete and successful was the transformation that the home won a Bricks and Mortar Award from the West Chester Historic Preservation Board in 2016. As we reported in County Lines, the rehabilitation “accomplished a complete restoration of the exterior and interior, while successfully addressing the need for modern conveniences, including state-of-the-art, energy-efficient mechanical and electrical systems. The project … demonstrates how a historic building can be reinvigorated while respecting historic character.” 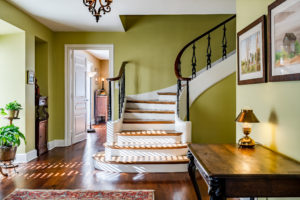 The striking home in the northeast quadrant of the borough was built in the 1920s by a French woman, Berthe Moffett, to resemble her ancestral home and designed in the Norman style— note the distinctively steep roof. Although the style is French, local fieldstone on the exterior was repurposed from old Chester County mills, including two millstones placed on the grounds.

Interior details of the home—main staircase, marble mantels, and flooring for the second-floor great room—were shipped from France and England. High ceilings and dozens of French doors and windows throughout create spacious, sunny rooms in the style of grand homes.

Moffet’s daughter, Renee, who was married there, also resided in the home with her husband, Frank Keen, a Chester County gentleman farmer who owned Blue Rock Farm in East Bradford. Keen lived in the house until his death in 1970.

Only four owners have called this home in almost a hundred years. It’s time now for a fifth. 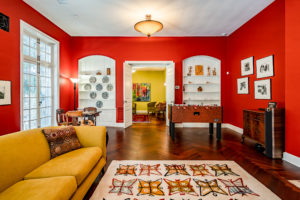 The elegant three-story home shows no telltale signs of the extensive work done during its rehabilitation. Relying on E.C. Trethewey Building Contractors to oversee construction inside and out, the owners’ goal was to keep the historic character and architectural features of the home intact, while upgrading its systems and appearance.

A prime example of the transformation is the new kitchen. Sandblasting and repointing the stonework was needed to save the walk-in fireplace and other stone walls in the space that includes two massive reclaimed beams for thresholds to the dining room. New cabinets were installed, along with state-of-the-art appliances and a unique Tasmanian blackwood breakfast bar. Soapstone counters with distressed edges simulate a century of wear (using a Franklin edge technique). 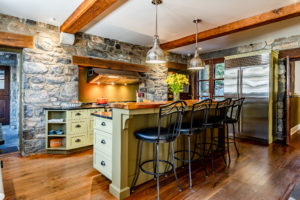 Other major changes included converting a study that was adjacent to the kitchen into a more convenient dining room, adding a second-floor laundry room and new closets using doors discovered in the home’s basement, plus renovating two bathrooms.

And yes, cracked plaster was repaired, but while leaving decorative wrought iron radiator wall grates intact, as homage to the home’s past.

Perhaps the most unique aspect of the renovation is the seamless integration of the new HVAC system into a historic home. The extent of the complex and monumental project of installing a geothermal system and a solar array for use in a 1920s residence has been written about in several magazines, including the online Old House Journal.

Suffice it to say that old boilers, hundreds of copper pipes, and 20 radiators were recycled and replaced by a three-unit, 15-ton geothermal heating and cooling system for green energy. Even more magic happened with the installation of virtually invisible ductwork in custom soffits throughout the three floors of the house, respecting the historic character of the interior.

Both a secret garden and a large, level lawn—perfect for croquet, badminton or a party tent—enhance the grounds designed years ago by an accomplished gardener.
An award-winning West Chester original is ready for its next owners.