Our preview of the Chester County Day House Tour 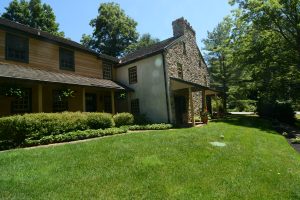 Saturday, October 1 is the 81st annual Chester County Day home tour, and like any other durable location tradition, it’s still going strong, this year focusing on more historic homes and gardens in the northwest part of the county. A walking tour of the northern part of West Chester Borough, including four charming homes, is also part of the tour.

As much as any other part of this famously historic county, and maybe a bit more, this is a place where the elegance and charm of centuries past live on, lovingly preserved by owners who open their homes to the public for this once-a-year event.

Having raised more than $5 million, the house tour continues to benefit Chester County Hospital, which is growing to meet the needs of the county’s increasing population. But the event is also a rare opportunity to get a closer look at what draws people to visit and live here in the first place. 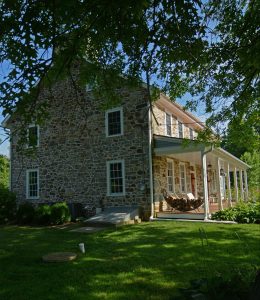 Some people fall in love with a house despite its need for major renovations. But Beth and Glenn Cozzone went looking for that in the first place — the idea being they could make it closer to exactly what they wanted.

The Cozzones were living in Houston at the time, thinking about retiring and moving into an old house closer to their children and grandchildren in Chester County. They looked at a lot of houses and finally found one they liked on Hibernia Road.

It certainly did need work, but they felt it had “good bones.” Built by Nathan Grier in 1791, the house was a home and seminary for Grier, the pastor of the Forks of the Brandywine Presbyterian Church. 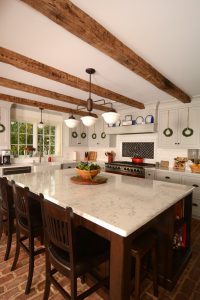 Beth Cozzone says, “It really did need a lot of work.” But they felt they could restore it to its former glory and make it more their own. The renovation took six months, including adding a new kitchen to one side, widening the doors into the dining and living rooms, and making the usual upgrades to the heating, cooling and other systems. At the end, the house appears much as it did when Grier taught his divinity students there.

Gardens and outbuildings, including the ruins of the original barn, add to the appeal of the 6.9-acre grounds. The Cozzones have been happily living there since 2018. 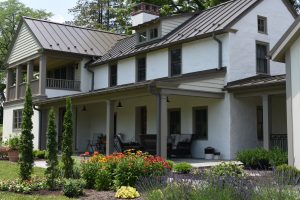 Elizabeth and Richard Lisowski actually looked at their current home some 20 or 25 years ago, when it had first come on the market. But for a variety of reasons, they decided not to bid on it. In time, it came back on the market, and the stars had aligned themselves better, so the Lisowskis bought the property in 2015.

Originally a fieldstone farmhouse built in 1850, the home needed some attention but certainly had potential. “One of my dreams has always been to own an old farmhouse and then fix it up and renovate it,” says Elizabeth Lisowski. 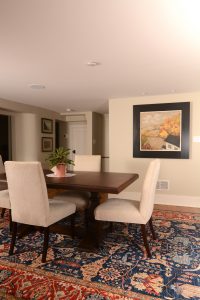 Some of the renovations were more challenging than others — the existing living room floor sat on dirt, and the builders discovered it was full of large rocks. But once past that hurdle, they added a kitchen, living room and breakfast nook.

For the Lisowskis, the natural beauty and peacefulness of the area is a big part of the appeal. Five acres of the 20-acre property on Jones Road are a forest that abuts French Creek State Park. There’s a beautifully landscaped hill in the back and a pond near the driveway with cedars next to it — one of the features that attracted them initially.

The neighbors are a friendly, close-knit bunch, the Lisowskis say, but the property is idyllically pastoral, a refuge from the bustling wider world. 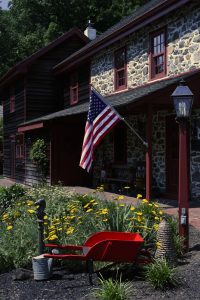 Anne and Tom Riesenberg were living Chicago when they first saw the house they now live in on Wagontown Road. They were visiting their daughter, who lived in the area, and made up their minds to buy the property if it came on the market. It did, and that was that.

But Tom Riesenberg says they consider themselves caretakers, part of a tradition, and in fact, without that attitude the house might not have survived long enough to come into their hands.

Originally, back in 1790, their home was part of a group of houses that sheltered the families of people who worked in a nearby grist mill and iron forge. But the houses were neglected over time and had dirt floors and no plumbing well into the 20th century. 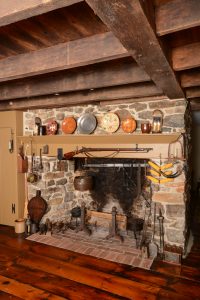 “It could have just been turned into a pile of rubble by now,” Anne Riesenberg says. But luckily the houses were renovated in the mid-1970s by Jack and Joanne Conti, who restored six former workers’ residences in that area.

The Riesenbergs made further changes, including enlarging the kitchen. Now the house has wide-plank pine floors and attractive cabinetry, with a living room dominated by a large traditional fireplace and appropriate furnishings throughout.

Perched high of the West Branch of the Brandywine, surrounded by charming landscaping, this house has risen above hard times with the help of more than one caring steward. 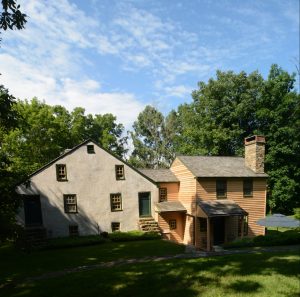 Bill Welsh’s home on Wagontown Road was originally housing for mill workers, built around 1810 by the owners of a local grist mill and iron forge as a dormitory for employees without families. Like the neighboring Reisenberg home, it was also restored by Jack and Joanne Conti in the mid-1970s. The Welsh home consists of two houses joined together.

Welsh had previously lived in a house in West Grove that was built in 1740 and in which he did a lot of restoration, including setting up one room like a colonial tavern. True to form, he did exactly that in his new home, doing the work inside on the dining room and then setting it up as a tavern with multiple tables and a bar. 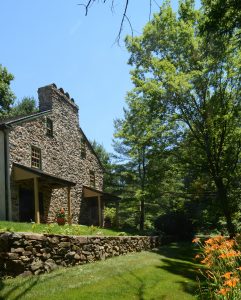 The five-acre grounds have extensive walkways and gardens, with a view of the Brandywine a ways below it. Welsh, who is friends with Jack Conti, says he’s trying to get it back to the way they had it in the 1970s. He’s the kind of person, he says, who sees a broken thing and feels compelled to tear it apart and rebuild it. Welsh even plans to restore to working condition a well that was there long ago.

“You don’t really own a house,” he says. “You’re just a caretaker.”

Where: Northwest quadrant of Chester County and north area of West Chester Borough

Tickets: $55. On sale online and at satellite locations. See website.