Maybe it’s especially fitting this year, as many of us slowly return to something like a normal life, to remember that Chester County Day has long been a celebration of continuity and endurance.

The historic homes and gardens on the widely famous tour established in 1936 have been valued through the generations, and often the centuries, so much so that the tour has continued with only a handful of interruptions when extraordinary circumstances required them.

Last year was one. But on October 2, 2021—as always, the first Saturday in October—the 80th Annual Chester County Day House Tour resumes.

This year the tour will not be virtual, like last year, but will have real doors opening to allow real visitors to explore some of the most remarkable properties in a county world-famous for its own special kind of beauty.

Here’s a preview of four properties on the tour. 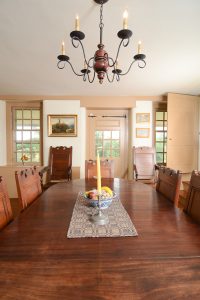 Peter and Robin Latta smile when they tell you Deborah’s Rock Farm got its name from the legend of a lovelorn Native American maiden who threw herself despairingly off a cliff instead of choosing between a settler and a Native brave. The cliff part is real enough; the quarter-mile driveway winds along an outcropping that stands some 80 to 100 feet above the East Branch of the Brandywine.

The colonial-era roots are genuine as well. The Lattas say the land was first settled in 1724 following a William Penn land grant, and the center part of the house was built around 1765. The next section was added in 1823, and two stone wings were added to the home in the early 1930s.
Samuel Wagner Sr. bought the property in 1929 and commissioned R. Brognard Okie, an architect famed for his Colonial Revival homes, to renovate the stone farmhouse and design additions.

Strictly speaking the design was inspired by Okie. At one point the Wagners suggested not covering the gutters, as Okie had specified, whereupon he declared his job done and said his bill would be in the mail. The Wagners got another architect to finish the work, with the gutters uncovered. Today the multiple sections of the elegant stone farmhouse extend along a hillside with sweeping views of the fields to the south.

The Lattas had roots here of their own. As a boy, Peter had permission to fish for bass in the pond there, and Robin babysat for the Wagners. When they found the farm was for sale, they were living in a farmhouse nearby but moved quickly to acquire it. The Wagners were glad, because they knew the Lattas would carry on their sense of stewardship.

The Lattas enlarged the kitchen and rebuilt the barn. Their overall goal is to maintain the property with the hope it stays in the family through future generations.

Anyone who comes up that long driveway on Chester County Day and looks out over the landscape can feel confident those views will remain unspoiled for a long, long time to come. 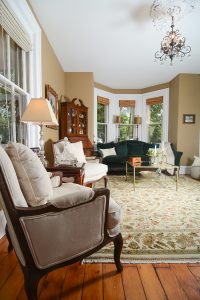 Duke and Kim Schneider are among the more enthusiastic attendees of the tour, having been on it from the time they were first dating and for decades since. Then in 2019 the Schneiders bought a house on Miner Street in West Chester that had been on the tour 20 years before, and this year it’s making a return.

The house is an immaculate example of the Victorian houses that make up a large part of the architectural landscape in West Chester and Chester County. Kim had not anticipated living in a Victorian home, or a twin, for that matter, but the couple fell in love with the house and the garden, and that was that.

They say it was evidently well kept up by the previous owners after it was built in 1872, and there was little in the way of renovation they needed to do. New bookshelves in the living room were added, though, designed by their daughter Heather, who shared their own love for architecture enough to plan a career in it. The couple did the carpentry for it themselves. Other improvements: an expanded porch area in the back, upgraded fencing, and a new shed.

The yard, centered around a fountain, is the kind of charming and secluded garden you’d never see from the street. But that’s what Chester County Day is all about. 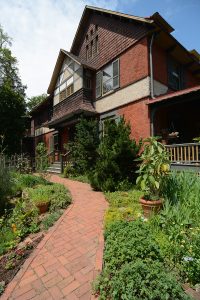 It would be no surprise if Dale and Susan Frens, an architect and designer respectively, lived in a house that embodied all the visual interest historic home design is capable of. In fact, sure enough, they do.

The Frenses themselves knew they’d found their home when they saw it had a kind of rectilinear spiral staircase, a mass of angles and shapes out of an M.C. Escher print, with delicately complex woodwork finishing it off like icing on a cake.

But others might stop first to admire the exterior of this 1887 Queen Anne Revival gem from T. Roney Williamson, an architect known in the area for his Queen Anne buildings. The Frenses were no strangers to his work, having renovated the West Chester Public Library and having offices at the time in another Williamson building in the West Chester Borough.

Queen Anne architecture doesn’t have much to do with the styles predominant during the reign of the monarch it’s named for. It was a varied palette of mostly Renaissance stylistic elements that could be freely drawn on by architects to create whimsy, charm and intense visual interest. Just a few typical examples on this house include the three different wall surfaces and the half-timbered wall extension.

After buying the house in 2010, the Frenses extended the back and put in a modern kitchen and a perennial garden watered by a large underground water collection tank. The general goal was historic preservation in harmony with thoughtfully added modern elements where appropriate.

When you visit, note how the Frenses live sustainably in the present while giving continuity to the aesthetic treasures of the past. 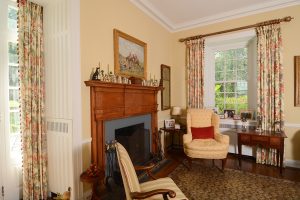 Rolling Plains Farm on Wollaston Road in East Marlborough Township is one of those houses maintained as a kind of shrine to equestrian pursuits, with walls and shelves you imagine bare if there were no such things as horses or foxes. But it’s also a tribute to continuity—of family life, of centuries-old art works, of a house changed and changed back, and of sweeping landscapes that look as they did in colonial days.

Cuyler Walker has lived there since 2008, but not for the first time—he grew up in the large fieldstone home originally built in the 1850s for a dairy farmer named Rakestraw. Walker’s grandparents bought the home and the surrounding 250 acres, and his parents lived there since the late 1940s.

The soaring arches in the foyer are among the visual pleasures, and the living room has large, striking portraits of people and horses. The woodwork, once painted, is now a natural finish, and the exterior fieldstone, once stuccoed over, is now open to view, and smaller, more like brickwork or masonry than the more typical large fieldstone walls. It gives the house a distinctive look not seen in most other parts of the county.

One of the smaller rooms has walls covered with framed black-and-white photos of the family’s history with riding, as lovingly preserved as the pristine vistas outside where new generations still practice the ancient art.

Chester County Day House Tour celebrates the distinctive architecture of the Southwestern Quadrant of Chester County along with a walking tour in the Everhart Park area of West Chester Borough. This is a self-driving tour.

Benefits: The Women’s Auxiliary to Chester County Hospital’s new pledge towards the advancement of Breast Health in Chester County.