But that’s exactly what the creative problem-solvers on the Tour Committee created during this pandemic to keep this tradition alive. Yes, Virtual 79½ Chester County Day will be online and happily extends far beyond its usual singular day on the first Saturday in October.

The interactive experience with photos, slideshows and video interviews on Facebook and Instagram includes features such as tours of homes, a featured home of the week, special themed menus, plus historical articles, trivia and more. Follow the Chester County Day Tour’s social media for daily postings to see highlights of each quadrant and interviews with homeowners and others on topics such as the challenges of restoring a barn or living in a historic property with a young family.

For our part, County Lines has revisited the homes we’ve profiled over the past ten years, selecting memorable homes to showcase again—in most cases these are our cover homes for past ten September issues. A single interior and exterior photo were chosen, along with the description published in the official Chester County Day Tour map. We hope you’ll enjoy revisiting some of the stunning homes from past tours on the following pages.

In these extraordinary times, it’s reassuring that some traditions continue—albeit with variations for safety’s sake. Plans in 2020 balance the legacy of the oldest continuously run house tour with the health of tourgoers, homeowners and volunteers.

We are also reminded of the critical importance of having a world-class hospital in our community. Chester County Day has already contributed over $5 million to Chester County Hospital, and is working on a $1.25 million campaign—their Heart to Heart Pledge—to the hospital’s Heart and Vascular Program.

Yes, this year’s tour will be different—as is much of 2020. But we hope to see you on the official 80th Chester County Day Tour, always on the first Saturday in October — October 2, 2021!

County Lines will host a contest on Facebook to let you vote for your favorite Chester County Day house from the past ten years. Look through the following pages to find your favorite. Then go to to our Instagram page @CountyLinesMagazine on September 1st to find out more. 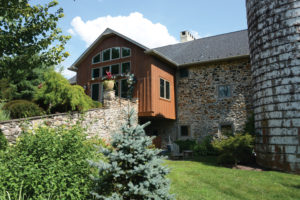 Enjoy viewing two levels of this 1867 bank barn, which began life as a dairy barn and then became a horse stable with training rings. The history of the barn, converted to a house on 5 acres of land in 2003, is retained with exposed stone walls, structural beams and the skeleton of a hay shoot now used to divide the living and dining area. There are slate floors throughout; large windows open to a patio, pond and pool with waterfall feature. 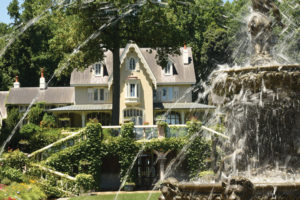 Built in 1851 and renovated in 1901 by Clarence Sears Kates, this spectacular Gothic Revival Picturesque Cottage home was given a new life by the present homeowners who purchased it in 1998. The homeowners preserved many original features of the house including the carved wood beamed ceilings and small-paned, leaded-glass windows. The gardens, with multiple fountains and numerous plantings, will be open for strolling, as well as the pool house and carriage house. 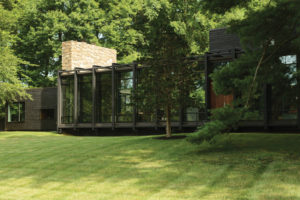 This sleek modern glass house of steel, stone and wood, was built in 2007 and has 5 landscaped acres planted with many varieties of beech trees. Featured in Elle Décor and International Architecture and Design, this masculine structure acknowledges the Pennsylvania aesthetic of rugged steel farm tools, stone walls and use of Pennsylvania bluestone. Stroll the yard with its swimming pool, vegetable garden and numerous trees including copper beech, weeping beech and American beech. 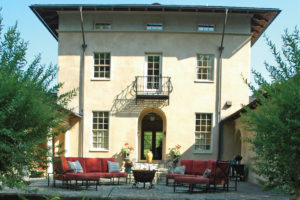 Although it is only about 15 years old, you might feel as if you have been transported to 17th century Tuscany as you enter the gravel courtyard. The inviting interior, filled with period and modern furniture and local art, reflects the values of its occupants: simplicity, craftsmanship and natural beauty 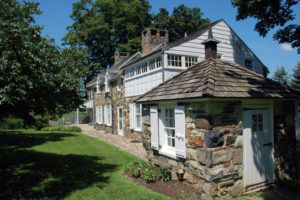 Regarded as one of the oldest continually inhabited houses in West Chester and situated on the oldest road in West Chester, this house was built circa 1750 for or by Thomas Hoopes. The house was restored in the 1920s by architect R. Brognard Okie for the novelist Joseph Hergesheimer, who wrote the book From an Old House, about the design and construction process. The home has been updated recently but still retains its three staircases, six fireplaces and craftsman-like excellence. 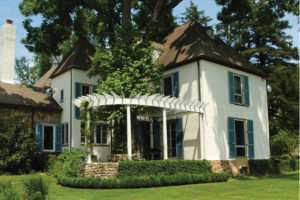 Willowbrook Farm took root in the early 1700s and has evolved over the years with many identities. It has been transformed from a typical PA farmhouse to a gentrified European-influenced farm that sits on the banks of Valley Creek. It is filled with history, had enjoyed visits by esteemed politicians and entertainment figures and is now a small family “farm” with many beautiful outbuildings, including a large, unique restored barn. 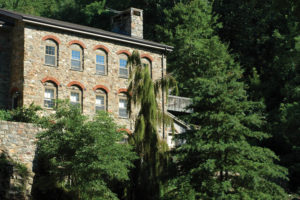 Isabella Furnace was a cold blast charcoal iron furnace named after Isabella Potts, wife of a member of the Potts ironmaking family. It was the last iron furnace to be built in the country in 1835 and went out of blast in 1894. The remains of the furnace complex have been listed on the National Register of Historic Places since 1991. Today it is a lovely home and country estate. Enjoy visiting the restored blast house, the private residence, the coalhouse and see the remains of the original stack of the furnace. 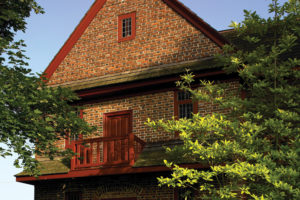 Quaker immigrant Abiah Taylor built this house in 1724, which is one of the oldest houses in this section of Pennsylvania. John Milner and his wife, Wynne, restored and expanded the house in the early 1990s. It is suspected that the house was erected upon an ancient Native American burial ground. The one level stone barn on the property was built in 1753 and is said to be the earliest documented intact rural barn in the state. 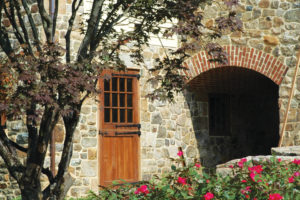 This lovely home was originally built as a farm in 1859 by a member of the Garrett family. The current owners have made many additions. As the name suggests, the house has a yellow exterior. The interior features period furniture with French furnishings. A wine storage and tasting room have recently been added. The newly completed reclaimed barn was procured from the Pittsburgh area and features a gathering area and place for the owner’s horses. 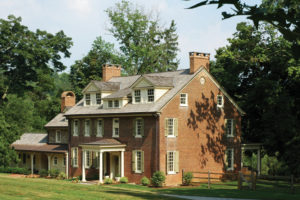 This 1806 Federal home, built by William Townsend, is constructed of bricks made on the premises. The home was totally restored by Archer and Buchanan architects. There are splendid examples of carved wainscoting and cornices and a mantel in the family room that were from an old Philadelphia house. This home was on the “first” Chester County Day Tour in 1936. There are lovely oriental carpets and a gourmet kitchen. Each room has its own personality.

Tagged under: Chester County Day, Home Tours
back to top