Create your own delicious vintage collection

I’m sure you’ve heard the expression, “Like wine, it gets better with age.” But those of us in the beer business ask, why should wine have all the fun?

Many people don’t realize that beer is also ageable. In fact, some beers are created specifically with cellaring in mind. 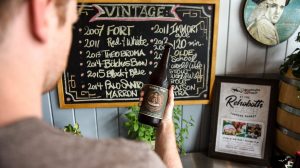 Another thing to keep in mind for aging beer: it’s a lot like enjoying music. Some folks enjoy the latest hits, while others prefer to stick to the classics. And there’s no right or wrong choice — especially when it comes to enjoying beer — only an ever-expanding array of options.

Now, you’re probably asking yourself a couple of questions if you’re new to aging beer — What beers can and should be aged? How do I properly age a beer? Won’t “old beer” make me ill?

While there are no hard and fast rules for aging beer, let me share a few tips to keep in mind as you explore and experiment.

As beer ages, certain flavors will fade while others become more pronounced. There are various factors that cause these changes, but the biggest influence is oxidation. While some beers respond better to oxidation than others, you won’t know what you like until you try. And that’s part of the fun. 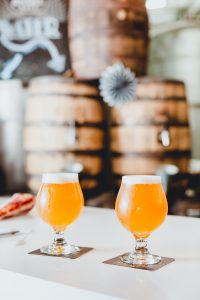 For example, hops — whether bitter, floral or citrusy — tend to fade in flavor over time, meaning hop-forwards IPAs typically aren’t the best candidates for aging. Yet for some beers, like Dogfish Head’s 120 Minute IPA (a continually-hopped, 15–20% ABV IPA), actually benefit from aging.

After a year or two of cellaring, this beer becomes smoother and more approachable, plus the aging process brings out some delicious sweet sherry and marmalade notes.

Long story short — if you aren’t sure how aging will affect the taste of a particular beer, buy a few bottles. Drink one fresh and stash the rest. After six months, crack open a bottle to see if you like the direction it’s taking. If so, try in another six months and see what you think. And if the taste is heading away from what you enjoy, invite some friends and finish it off.

There are exceptions, but beers that are 10% ABV or higher are most often recommended for aging. As with the 120 Minute IPA, most high-alcohol beers are full of pungent, complex flavors. Many of them also have a dark, heavy malt profile.

Take another example from Dogfish Head. World Wide Stout is a dark, roasty stout brewed with a ridiculous amount of barley, creating a beer reminiscent of a fine port wine. At 15–20% ABV, this beer’s alcohol content makes it a great candidate for ag8ing.

But that’s not all. The beer’s dark malt bill provides additional flavor protection in the aging process, as well as some defense against shelf-life woes, like oxidation, light and heat.

And speaking of shelf-life woes — this may be the most important tip of all — storage matters. Yes, you can technically age beer anywhere, but to best ensure quality, it’s important to store cellared beer in — not — cool, dark places like a basement or refrigerator set to 50–55 degrees. These conditions will protect it from elements like light and heat, which speed up the oxidation process. 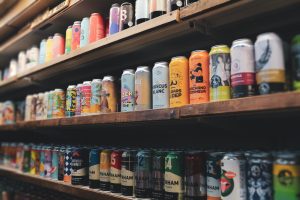 I also recommend storing your cellared beers upright, in contrast to cellared wine stored on its side. That way, if sediment falls out of suspension as the beer ages, it settles at the bottom of the bottle.

And if you see sediment at the bottom of your bottle, don’t worry — it’s totally normal. In fact, that sediment is nothing more than yeast or protein particles. To avoid consuming it, chill your vintage brew for a few hours before gingerly pouring it into a glass, a bit like decanting wine.

If you do happen to drink some of those particles — or “floaties,” as they’re sometimes called — there’s no need for concern. They won’t hurt you, which brings us to my final tip.

Last and certainly not least, when aging a beer, you don’t need to worry about it going bad. Beer won’t spoil like milk. You may not prefer what age does to the taste of a certain beer (or you may love it even more!), but regardless, aged beer won’t make you sick.

As you can see, aging beer is more of an art than a science. I encourage you to give it a try and have some fun with your experiments. It’s just beer, and what’s the wort … eh, worst that could happen?

A few final thoughts on cellaring beer: I wanted to share some of my absolute favorite vintage brews. In addition to those from Dogfish Head, I highly recommend adding a couple of the following beers to your vintage stash — Allagash Brewing Coolship Series (any of them), Sierra Nevada Bigfoot Barleywine, Firestone Walker Parabola and Brewer Ommegang Three Philosophers.

All these beers’ recipes and characteristics lend themselves to being great candidates for the aging process. And if you can will yourself not to drink them fresh (that self-restraint may be the toughest part), you’re in for a real treat a few years down the road. Cheers!

Mark Safarik, Brewmaster at Dogfish Head Craft Brewery, has over 30 years of experience ranging from 60-gallon nanobreweries to multi-million-barrel megabreweries. He joined Dogfish Head in 2014 and currently focuses on new product development, innovation and R&D. Mark is a graduate of the University of California at Davis, known for its training in brewing science. More at Dogfish.com.