Lung Cancer – What Women Should Know

It’s the leading cause of death in women and on the rise among women who have never smoked. But there’s still plenty that women can do to get ahead of lung cancer.

Lung cancer has a reputation for being a man’s disease—a male smoker’s disease, specifically—and for targeting smokers and former smokers when it does occasionally cross gender lines. 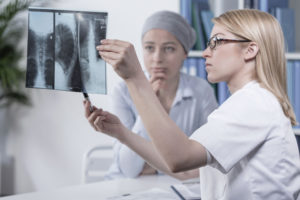 While these stereotypes have never been entirely true, they’ve also never been further from the truth. According to the American Lung Association, lung cancer diagnoses have risen a startling 87% among women over the past 41 years while dropping 35% among men over the same period. The overall number of cases remains fairly steady.

Shaking up stereotypes even further, between 60% and 70% of women diagnosed with lung cancer today are lifelong non-smokers—by contrast, only 1 in 12 men with lung cancer have never smoked. So while men still make up the majority of lung cancer diagnoses—almost 60%—the gender gap is narrowing, with lung cancer’s sights seemingly set on women with no obvious behavioral “reason” for the disease.

For men and women alike, these shocking statistics beg the question why?

Why Is Lung Cancer Increasing in Women?

“No one knows,” says John C. Kucharczuk, M.D., Chief of the Division of Thoracic Surgery at Penn Medicine. “It could be hormonal. It could be attributed to high degrees of exposure to secondhand smoke. Some data suggests that among non-smoking females who develop lung cancer, there are chances of a genetic mutation. At this point, there’s no conclusive data.”

But there are preventative measures, diagnosis tools and ever-evolving treatments that can help women—and the men who love them—see past these scary stats.

“Many women respond better to lung cancer treatment than men,” Dr. Kucharczuk explains, highlighting yet another area where gender might have a bearing on lung cancer and related outcomes.

“Female smokers and non-smokers with cancer have a lot of therapy options, ranging from surgery to radiation to chemotherapy to a combination of them all, as well as newer molecular-based treatments or immuno-therapies. For some non-smokers with suspected genetic abnormalities, targeted therapies have made a big difference,” he continues.

And so, lung cancer survival rates are higher among women than men.

It’s a lot to absorb about a condition famous for its daunting complexities—starting with its reputation for being fatal. Search “lung cancer in women” online, and brace for news that it’s the leading cause of deaths among females. While true, that statistic doesn’t paint the full picture.

Breathe in the Basics

More common than squamous cell is adenocarcinoma. Manifesting in the outer regions of the lung, adenocarcinoma also has ties to current and former smokers, but is the lung cancer type that’s prevalent among non-smoking females, too.

Bronchoalveolar carcinoma (BAC), formerly a third type of non-small cell lung cancer, is now considered a type of adenocarcinoma. It, too, is increasingly common among younger, female non-smokers—not just in the United States but worldwide.

How Can Women Protect Themselves?

About 8 million Americans are eligible for annual low-dose CT scan screenings. They range from smokers and former smokers to adults who’ve had prolonged exposure to radon gas, asbestos, air pollution, and secondhand smoke.

Women who don’t qualify for a lung cancer screening shouldn’t panic. While lung cancer among non-smokers is rising, it’s not an epidemic. Learn the symptoms of lung cancer and see a doctor right away if they occur.

“One way lung cancer presents is through reoccurring coughs or pneumonia. If you’re treated by antibiotics for either of these conditions and don’t get better, there’s a chance it’s an early indicator,” Dr. Kucharczuk explains.

Finally, women and men alike can prevent the likelihood of lung cancer for the next generation of women by discouraging them smoking, even socially.

“Statistics show that a lot of young adolescent women smoke. This is a real problem given rates of lung cancer in female ex-smokers. Do everything you can to keep your daughters and granddaughters from smoking, even experimentally or casually,” he says.

What If Lung Cancer Targets A Woman I Love?

The earlier lung cancer is diagnosed and treated, the better chance of successful outcomes. But the quality and combination of treatment you receive is equally critical. Look for a treatment center with a highly integrated set of offerings, including advanced radiation therapies and forward-leaning immunotherapy and molecular-based treatments.

“At Penn Medicine, we have an integrated thoracic oncology program that I lead,” Dr. Kucharczuk explains. “It’s a group of radiation therapists, oncologists, pulmonologists, chest-specific radiographers and dedicated pulmonary cardiologists. All provide oversights and guidance for lung cancer care.”

He also points to the benefits of a care provider with services in close proximity to your home—a factor that can improve outcomes.

And while the changing face of lung cancer can be scary, he underscores the fact that lifetime non-smokers shouldn’t panic. 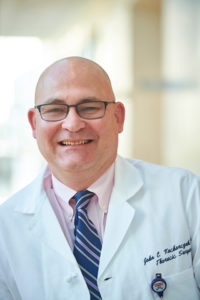 “Avoid smoking and secondhand smoke. Follow recommended guidelines. Get screened if you qualify for a CT scan, and rest assured that while lung cancer is on the rise, the number of lifetime non-smokers developing lung disease is still fairly small overall.”

John C. Kucharczuk, M.D., is Chief, Division of Thoracic Surgery and oversees the Lung Cancer Program at Penn Medicine. He specializes in the diagnosis and treatment of benign and malignant diseases of the chest, including lung cancer, esophageal cancer, mesothelioma and mediastinal tumors. He sees patients at the Perelman Center for Advanced Medicine in Philadelphia and Chester County Hospital in West Chester.

Tagged under: cancer, lung cancer, Women's Health
back to top