Why are our tastes so increasingly hop-centric?

IPA (India Pale Ale) is an acronym that’s pretty hard to avoid in the beer world today. You see it written on the draft lists at your favorite bars and restaurants, sitting on the shelves at the grocery store, and stacked to the ceiling at the local beer distributor. It’s undoubtedly the fastest growing style of beer in the U.S. and is becoming ever more popular around the world.

Why are we so obsessed with IPAs? To some, that’s not a simple question to answer, but we’ll try to dive into why these beers are so cherished and how our taste buds have become so hop-centric over the years. 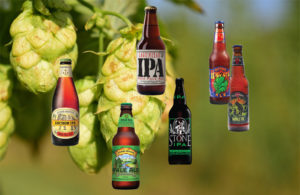 Hops are the cone-shaped flowers harvested from the vine of the hop plant (humulus lupulus), a member of the cannabaceae family, which also includes cannabis. Yup, hops and marijuana are very closely related.

Brewing is certainly just as much of an art form as it is a science, but brewers and scientists alike have been trying to unlock the secrets of the flavor and aroma compounds found in hops for decades.They still don’t have it completely figured out yet.

All the while, hops themselves keep changing to meet the demands of beer lovers around the world.

The Evolution of Hops

For hundreds, if not thousands of years, hops used for making beer were harvested in the wild. Around the 9th and 10th centuries AD, Roman Catholic monks in Europe recorded growing their own hops in the small gardens of monasteries that focused solely on producing beer for themselves and their surrounding community.

As the years went by, hops became more widely accepted as the gold standard for bittering, flavor and aroma in beer. Everyone from the Germans to the British, Czechs and the American Colonists began cultivating their own varieties of hops that maintained very specific flavor and aroma profiles characteristic to their respective growing regions and tastes.

British hops, like the Fuggles and East Kent Goldings varieties, ranged from earthy and floral to delicate, citrusy and spicy. These were used in porters, bitters and classic pale ales.

German Hallertau and Czech Saaz hops were mild in bitterness, floral and spicy. They were used in German lagers, wheat beers and Czech pilsners for their clean “Noble” hop character.

In the late 19th and early 20th centuries things started to get really interesting.

Serious hop shortages in Europe and the U.S. caused by mildew, pests and disease led to governments, universities and breweries around the world forming hop research programs. The goal of these programs was to find new hop varieties that, while disease and pest resistant, had all the desired properties of the hops commonly used to make the popular beer styles of that era.

These breeding experiments started with blending wild American and Canadian hop plants with British and German (Noble) hops. As a result of these new hybrid breeding techniques, hop varieties such as Cascade were born.

Cascade, with its floral, grapefruit and spicy characteristics, was made popular in the U.S. by breweries like Anchor and Sierra Nevada in their famous, game-changing pale ales of the 1970s and 1980s.

Many would argue that this was the beginning of the modern IPA and the start of the American craft beer revolution. And I’d agree.

Fast Forward to the 21st Century

While Cascade and Centennial hop-based beers ruled the craft beer roost in the 1990s, hops continued to change with the times. IPA lovers, dubbed “Hop Heads” by the craft beer community, wanted more and more hop flavor and aroma in their beers.

Breweries like Stone, Victory and Lagunitas expanded globally and started exporting their hoppy creations to Europe, the South Pacific and Asia.

Innovation in the South Pacific

New Zealand and Australia have been at the forefront of this “Hop Head” revolution as well. New Zealand, known for their world-class wine production, developed hop varieties that many consider to have “New World” flavors. These include favorites such as Nelson Sauvin—with hints of white wine and berries—and Motueka—with its fresh lime and tropical fruit character.

One of Australia’s great hop innovations has been the Galaxy variety with its passion fruit and citrus aromas. In combination with newly discovered U.S.-grown hops, these South Pacific varieties are in high demand for making a new style dubbed the “NE IPA.”

Here in the U.S. the latest craze is the Northeast or New England Style IPA. These beers look, smell and taste very different from the original West Coast IPAs of the early 2000s. They appear straw colored and cloudy from the use of large amounts of flaked oats and wheat in the mash. This gives the beers a thicker, silk-like mouth feel and a long-lasting white head of foam. Along with the cloudy appearance and great mouthfeel of the beer comes a huge, juicy hop punch of flavor and aroma.

This style of IPA tends to bridge the gap between the hardcore IPA-drinking “Hop Heads” and the everyday beer drinker because of its lack of bitterness compared with West Coast IPAs. Plus there’s the presence of extremely pleasant and fruity hop character.

Where do we go from here?

Who knows where the wonderful world of craft beer will take us next. Will we continue to innovate and experiment with new hop varieties and combinations? Will we use these new hybrid hop creations to create new styles of beer? Or, will we decide we want to revert back to the Old World styles of beer that were not so hop dependent?

One thing we can say for certain is that no matter what beer you find yourself drinking, rest assured there will be hops in it. At this point, the love of hops is in our DNA. 

Tim Floros is co-founder and brewmaster at Levante Brewing. His fascination with, and passion for brewing, as well as hops, began nine years ago and led him to brewing professionally. He places an emphasis on innovative recipes showcasing different hop varieties and other unique ingredients sourced locally and from around the world. Levante’s mission is to create beer of exceptional quality and freshness for Philadelphia’s suburbs and beyond. 208 Carter Dr., West Chester. LevanteBrewing.com.