What tastes tropical and juicy, with a soft, silky mouthfeel? 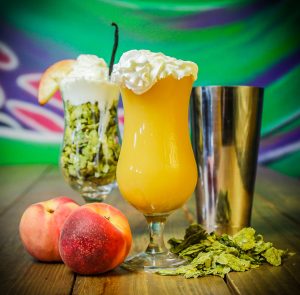 Since the start of the American craft beer boom in the mid ‘90s, three letters have remained at the forefront of brewing. Can you guess which three?

Yep, you likely guessed I-P-A. And although that’s an abbreviation for India Pale Ale, that traditional style of beer quickly transformed and was recreated with an American twist. Excessive additions of hops became the new standard for “American” IPA, and craft beer drinkers quickly fell in love with the new style.

In addition to being loved by consumers, brewers themselves embraced this style and many began to push the envelope of creativity and experimentation. By the late ‘90s the IPA trend was in full bloom and many offshoots of the style began showing up on the craft scene. New variation—like Black IPA, Belgian IPA and White IPA, to name a few—had their five minutes of fame. But their popularity lost momentum over time.

Many pebbles of exploration were tossed into the IPA pond, creating small ripples that quickly faded. Yet in 2003, one brewer threw a rock into that pond. The resulting ripples quickly turned into waves that later became a tsunami. 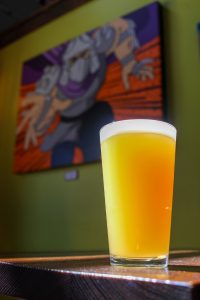 That rock-throwing brewer was John Kimmich of The Alchemist Brewery in Stowe, Vermont, and the beer was named Heady Topper. Kimmich’s creation was a unique take on the beloved IPAs, now with unrestrained hop aromatics, juice-like hop flavor, creamy mouthfeel and a moderate bitterness. Heady Topper was, and is to this day, a showcase of hops, hops and … more hops, with malt taking a backseat in this flavorful brew.

How is it brewed? Only a small quantity of hops, if any, is used early in the boiling process to minimize the bitterness, while an abundance of hops is used late in the boil to provide a dominant hop flavor. To achieve the desired explosive hop aroma, a process known as dry-hopping is used. Dry-hopping involves tossing a large amount of hops directly into the fermenter to allow the beer to absorb the beautiful aromatics.

What about the malt? Although the malt flavor is light, the grains used play a huge supporting role in making this beer a star. Higher protein malts are used to give Heady Topper a fuller body and a soft mouthfeel.

None of the processes Kimmich used were considered groundbreaking or even unconventional in creating IPAs. What truly made Heady Topper stand out among others was its bizarre appearance. With turbid proteins from the malt and tiny bits of hop particles floating throughout the beer, Heady Topper has a murky, cloudy appearance. You can’t see through this beer.

The only thing clear about Heady Topper is brewer Kimmich’s vision of his beer. Kimmich set out to make an unfiltered beer that smells amazing and taste even better, and he did just that.

But what about the resulting hazy appearance of the finished product? Haze was never the goal of this beer. It’s merely the byproduct of the brewing process. Kimmich ignored the appearance and made the bold decision to put the beer out into the world based solely on the fact that it tasted great.

The Spread of Foggy Beer

Local brewers became fascinated with this newest IPA, and surrounding breweries quickly began producing their own versions of the style. The Alchemist Brewery, along with other local breweries, became a destination for craft beer lovers all over the map. And soon after that, word of this new style of IPA began to spread beyond Vermont.

With many Vermont breweries now producing this new style of ale, a new name was needed. Many started referring to it as Vermont-style IPA and later New England IPA or NEIPA. The name served to distinguished it from the assertive bitterness of the West Coast-style IPAs. 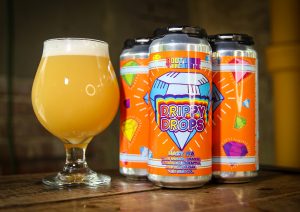 But would this hazy style stick around or would it be another flash in the pan, like so many other variations of IPA?

The New England IPA quickly gained broad popularity in the craft beer world. Soon breweries from coast to coast were brewing massive amounts of the hazy IPA. And as fast as brewers could produce the beers, consumers were drinking them. The so-called ‘Haze Craze’ was here and showed no signs of slowing down.

The cloudy, golden-orange glow from a pint of a hazy IPA not only became accepted, it became strongly desired. New brewing techniques were created to make the beer even hazier, with use of oats, fruit pectin and even flour.

What was once viewed as a murky, messy looking beer has become one of the most popular craft beer styles in the U.S. In 2018, the Brewers Association recognized the Hazy IPA and added “Juicy or Hazy Pale Ale” to its style guide.

But make no mistake: A well-made Hazy IPA has much more to offer than its distinctive looks. It provides beer fans with a sensory overload drinking experience. The aroma is filled with vibrant scents of fresh citrus and tropical fruits, followed by a smooth orange juice-like flavor unhindered by hop bitterness.

So, whether you’re a ‘hophead’ or just a curious beer lover, next time you visit a brewery, order the hazy one. And if you feel like you can’t get past the murky appearance, just close your eyes and sip. Your taste buds will thank you.

Mike Hamara’s love for craft beer began in 1999 after his first visit to Victory Brewing and grew into a passion as he started homebrewing and later opened Artisan Homebrew Supply Shop in Downingtown. The desire to create his own homegrown, handcrafted brews led him to open Root Down Brewing Company in Phoenixville in 2017.  Mike put his roots down and cultivated an atmosphere of good music, community and greatcraft brews. Root Down Brewing, 1 N. Main St. RootDownBrewing.com.