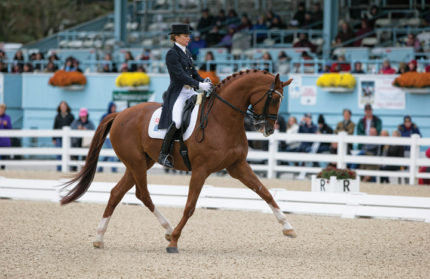 If you’ve ever wondered about the origins of the elite equestrian discipline of dressage, start with knowing that the word is French for training. And for its many fans and followers, dressage is also affectionately and appropriately known as ballet on a horse. It’s that dance-like quality that draws crowds to Dressage at Devon each September.

For a deeper understanding of the distinctive dressage movements executed when horse and rider are completely in tune—a partnership that can take decades to develop—a little history is in order. In fact, these classic movements have a 2,000-year-old history, and that history originated on the battlefield.

To prepare for the wars endemic to that period in history, ancient Greeks developed a method of training horses to aid their success on the battlefield. Early writings by the military commander Xenophon about this training date back to 400 B.C.

Synchronization between horse and rider was one key skill needed to survive in close combat. For the warhorses, their ability to move swiftly from side to side, change direction, or increase their speed with ease were all vital survival skills. These horses whirled and danced in an effort to avoid the enemy’s weapons. In short, the better trained the horse, the safer the rider. These battlefield maneuvers are the basis of modern dressage movements.

Not surprisingly, it takes years to train a horse to respond promptly, compliantly and obediently to a rider’s commands—all desirable traits for a horse whose rider is faced with swords and arrows. Perhaps the U.S. Dressage Federation Guide to Dressage said it best: “Clever cavalrymen discovered that they could make their horses even more useful by teaching them special movements that would give them a strategic advantage in battle. A swordsman, for instance could literally rise above the enemy—mounted or unmounted—by cuing his horse to do a levade, a low, controlled rear on command.”

Later, guns and cannons made hand-to-hand (and horse-to-horse) combat and these special movements obsolete. But the beauty of dressage lived on. During the Renaissance, aristocrats held equestrian pageants with highly trained horses and continued to develop specialized training. Still later, for the Victorians, riding became an even more sophisticated artistic discipline.

Another milestone for dressage is 1729, when the world-famous Spanish Riding School was created in Vienna (although some believe an earlier date of 1572). The School has been instrumental in laying the foundation for classical dressage—and the basis for modern competition—connecting the movements in the battlefield to the magnificent display in the show ring.

These horses (which were originally Spanish, thus explaining the School’s name) were bred for war but trained for high art, blending raw strength with agility and lightness. Today the Spanish Riding School is home to more than 70 Lipizzaner horses known for their strength and grace in the ring, including the astonishing Airs Above the Ground movements.

Tradition, dating back centuries, requires that each morning every hair is polished and all tack (saddle, bridle, etc.) is clean and shining. This standard of care applies as well to the riders’ uniforms of tailcoats, bicorn-style hats, white buckskin breeches, white suede gloves and black top riding boots. All this meticulous preparation is done before horse and rider leave the barn for the morning work sessions or the afternoon performances. 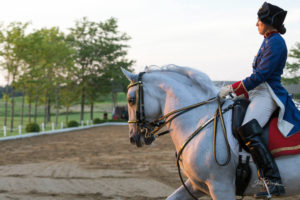 Dressage first appeared as an Olympic sport at the 1912 games in Stockholm, but until 1952, only military officers were eligible to compete. Civilian men and women began to participate, and today the vast majority of the U.S. Dressage Federation (USDF) members are women—more than 90% by most estimates.

It wasn’t until 1973 that the USDF, the cornerstone of modern dressage as a competition sport, was founded. Interestingly, although Dressage at Devon has been at the Devon Show Grounds since 1975, its predecessor, the Delaware Valley Combined Training Association, dates back to 1965.

The evolution of dressage from military activity to competitive sport introduced a new element: judging. Dressage judging is a complex process, but essentially, judges score riders on a predetermined set of movements, on a scale of 1 to 10. At competitions—from the Olympics to Dressage at Devon—you’ll see judges strategically placed at different spots around the ring so they can view specific movements more clearly.

Training for judges is extensive and exacting, much like dressage itself. To better understand how judges score riders, read the sidebar, Dressage with the Experts. 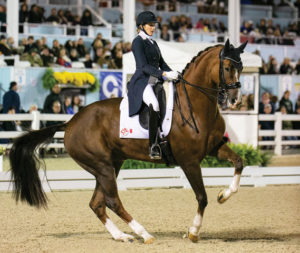 Another change to modern dressage is that although many movements still practiced in modern dressage competitions originated on the battlefield, not all are seen in competition today. For example, several movements (named levade, capriole and courbette) are in a category called Airs Above the Ground. While the leaping and rearing in these movements were effective battlefield maneuvers, they’re performed only by highly specialized horses, such as the famed Lipizzaner Stallions at the Spanish Riding School.

At Dressage at Devon and other top-level dressage shows, you’ll see certain designated and difficult movements with roots in military maneuvers, especially at the upper levels.

Just imagine how each of these moves can be helpful in battle!

It’s complicated but pay close attention and you may be able to tell when a movement is done well. Hint: usually the less the rider appears to be directing the horse, the better.

The 1996 Olympics in Atlanta saw a new dressage development that immediately became a crowd pleaser—freestyle to music. In these classes, the rider and a choreographer develop a dynamic routine that matches music to the horse’s gait to create a captivating performance.

Freestyle events take place Saturday and Sunday at Dressage at Devon. (Check the schedule online to confirm times.) And while horse shows are notorious for not running on schedule, dressage is the disciplined exception. Maybe it’s that military connection …

While there are always risks in any equestrian sport, today’s dressage competitions are certainly safer than the battlefield. And more fun for rider, horse and spectator!

Dressage with the Experts

To understand dressage at a deeper level, listen to the experts describe the rider’s movement and learn why the judges give the scores they do.
A special personal receiver allows you to follow the commentary of some of the foremost experts in the world of dressage. The digital FM radio receivers can be used anywhere on the show grounds on Friday, Saturday and Sunday. Learn more on the Dressge at Devon website.

At the Maccabi Games

West Grove’s Rebecca Cord not only represented the U.S. as an athlete at the 2019 European Maccabi Games held in Budapest, but she coached the team as well. Often called the Jewish Olympics, these games support Jewish athletic endeavors and cultural and educational opportunities. Dressage joined show jumping as a featured equestrian event in 2015 in Berlin.

Congratulations to the U.S. team!

Dressage Explorers on Sunday for the kids.

Tagged under: Dressage, Equestrian, Horse Show
back to top