Confessions of a Cookbook Addict

I think what drives my mother-in-law is the same as what drives me: in some deep part of ourselves, we believe that one cookbook will have it all, will give the answer to breakfast, lunch and dinner for the rest of our lives. 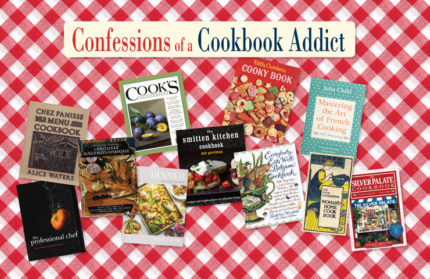 When I started as food editor at County Lines nearly six years ago, I had 600+ cookbooks. As of this writing, the number edges toward 720. I like cookbooks for the same reason most people do: the recipes, the photographs, the peeks into other lives and cultures. Through cookbooks, I’ve eaten thousands of meals I’ve never actually eaten.

But why collect? And why so many?

It all started with the dopamine hit I got every time I cracked open my mother’s copy of Betty Crocker’s Cooky Book in the mid-1970s. While my sister and I fantasized about the day we’d make the Cooky House on page 64, we busied ourselves with snickerdoodles, chocolate crinkles and tiny fudge tarts. I read and re-read the “Best Cookies” section about each decade’s most popular cookie—from 1880’s nutmeg-spiced hermits traveling on Clipper Ships to 1960’s French Lace Cookies, a reflection of America’s budding interest in international cuisine. That history could be told through cookies thrilled every cell of my 10-year-old self.

While I continued to cook the occasional meal for my family and friends from high school through my early twenties, food and cookbooks did not consume me until I met my husband, Bill, and more importantly (for the purposes of this article), his mother, Georgie.

The first time I visited the Brennans in Princeton was the day after Thanksgiving in 1988. Georgie had set the table with Dijon yellow Indian block print placemats and served butternut squash soup. The fire was going in the red brick hearth. Cookbooks lined the shelves. Again, blame dopamine or cite Pavlov, but since then, cookbooks signal contentment and abundance and home for me.

Georgie had the first Chez Panisse cookbook and the entire 28-volume set of Time Life’s Good Cook Series. She was the first person I ever knew who read cookbooks cover to cover. To this day, she calls to tell me when she scores a new cookbook at Sam’s Club (where she often buys me a copy, too). When she visits, I leave all my recent acquisitions on the coffee table for her reading pleasure. Thirty years on, every birthday and Christmas, she builds my collection and I build hers.

I find my cookbooks everywhere: small independent bookstores, large retail shops, yard sales, friends’ shelves, libraries. One of the first things I do when visiting a new city is to scout out its used bookstores. (Cue my children saying, “Sad, Mom” and shaking their heads.).

A quick scan of the cookbook section in a city’s bookstore gives me a sense of the place and its values. It’s my take on “Tell me what you eat and I will tell you who you are.” And then there are cities with stores devoted entirely to cooking, culinary biography and agriculture. How I love Bonnie Slotnick Cookbooks in Greenwich Village, Omnivore Books in San Francisco, and Appetite for Books in Montreal!

In the past few months my collecting habits have broadened. I’ve been rescuing home cooks’ recipe boxes at estate sales. While I have not stumbled upon a lost letter from Julia to Paul Child, I did discover Eddie Temple’s Icebox Cake—“Out of this world” notes the unknown home cook (Temple is a character in the 2004 British thriller, Layer Cake)—and a crazy concoction called Spaghetti Ring. Preserving these recipe boxes is my way of paying respect to home cooks who got dinner on the table night after night without the help of takeout and Ubereats.

I have few hard and fast rules for my collection. I’ll buy anything written by Ina Garten, Melissa Clark, Deb Perelman or Cook’s Illustrated. I will, however, no longer buy anything with the words “sneaky” or “deceptive” in the title, having learned the hard way that pre-schoolers do know when you’ve slipped mashed chickpeas into their chocolate chip cookies.

Sometimes, I follow my friend Kath’s standard: buy only books with at least five recipes your family will like. Mostly, though, I choose what strikes me, often a title that makes me laugh, which explains why The Eating-In-Bed Cookbook shares shelf space with Cold Spaghetti at Midnight and Everybody Eats Well in Belgium.

My oldest cookbook is a 1909 Good Housekeeping Woman’s Home Cook Book with sections like “invalid cookery” and “baking powder breads.” I unearthed it at a Philadelphia hospital’s thrift shop and still feel slightly guilty that I paid only $1.

As for my prized cookbook, it’s a typed collection of recipes from the Montchanin estate of Wilhelmina du Pont Ross, where my mother worked as a private waitress from 1956 until 1964. Mrs. Ross gave this cookbook to my mother for Christmas 1966, and as far as I know, there are under 100 copies in existence.

When I leaf through it, I’m in the kitchen roasting grouse with Nessie Foote, Mrs. Ross’s Scottish cook. And then I’m in the dining room with my mother—24 and recently emigrated from Ireland—as she serves jellied tomato consommé and wonders at the food of her new home.

I don’t keep a diary, I gave up scrapbooking long ago, and I never did put a guest book in our guest room. It’s my cookbooks—and the notes scribbled in their margins—that hold my history. They show the evolution of my interests and the places I’ve traveled. They remind me not only of the dishes I served but who was at the table and what a good, good time we had.

Tagged under: Brandywine Table
back to top