September means back to routine. A time when we trade in carefree summer grazing for something a bit more orchestrated. And while planning our meals may sound onerous at the outset, it doesn’t have to be.

Chef John Alff of Vesta Kitchen in Phoenixville says his menus are inspired by what’s available. “I like to actually go to the store or farmers market and see what ingredients jump out at me. It gets the wheels turning on what I can create.”

Originally from Bucks County, John says his food journey began in a hometown pizza joint before winding its way through some of the best-known restaurants in Philly (including Percy St. BBQ and Barbuzzo). Ultimately, he and his wife decided to trade the fast-paced city life for something a bit more family-centric and found their way out to the Phoenixville area. 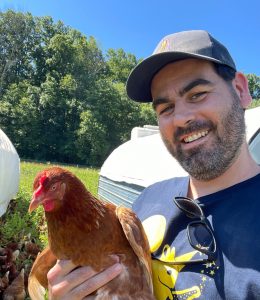 John’s passion for seasonal, local ingredients led him straight to the Phoenixville Farmers Market, where he quickly developed relationships with the growers and producers. He was especially taken by the fresh-baked bred from St. Peter’s Bakery. “I asked the owner one day if I could come hang out and learn to make bread.” The owners agreed, eventually making him part of the team.

A couple years later, when the farmers market needed a hot food vendor, John decided it was time to start his own business. With little more than a smoker trailer, folding tables and a tent, Vesta was born. John began by selling hot breakfast sandwiches and smoked meats on weekends. He chuckles remembering the early days. “I was renting out a church kitchen, working around youth groups and bridge club,” he says.

Eventually, John met the folks behind Partners Creating Community, an umbrella organization for three mission-driven artisan food companies in Chester County. He loved their energy and mission and began subleasing their kitchen space in Franklin Commons.

By the time the pandemic hit in early 2020, John had developed quite a following. In an effort to stay afloat while staying safe, he pivoted his business online and offered contactless local deliveries. While order volume was down, sales remained steady, thanks to larger orders with a wider variety of dishes.

Also during this time, John began processing and preserving large quantities of seasonal produce and developed a new line of small-batch pantry products (most notably his fermented hot sauces).

Today, John’s amazing food and sauces can be found all over town, including prepared salads and sandwiches at the newly-opened Red Dog Market in Pottstown and various pop-ups and caterers throughout the region.

Check out these recipes and tips to help make your transition to fall cooking exciting and delectable.

You’d be surprised how far a few tasty ingredients, vibrant condiments and make-ahead recipes will get you. Work these into your menu planning rotation — you’ll thank us later.

This pesto is a great way to use up basil at the end of the summer as well as to incorporate ingredients that are coming up into season in the fall. Substitute other ingredients for carrot tops depending on the time of year — ramps in spring or radish and turnip greens in the summer! 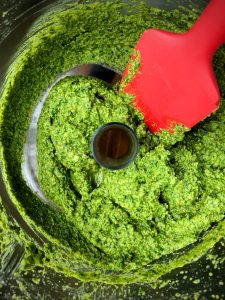 Add all ingredients except for olive oil to food processor and pulse until finely chopped and combined. With machine on lowest setting, slowly add the olive oil until desired consistency and all ingredients are buzzed and incorporated. You may need more or less oil depending on personal taste.

Taste and adjust salt and pepper as needed.

Enjoy on a pasta salad, as a dip, on a slice of baguette or marinate chicken breasts in it overnight to grill the next day. Will keep in the refrigerator for up to one week or can be frozen.

Tip: John says freezing sauces and herbs in ice cube trays allows you to just thaw what’s needed when you want to use it again.

John always enjoys collaborating with local food artisans. When this fermented hot sauce and blue cheese combo was invented, it was too good not to share. John now bottles it and calls it “Tangled Up in Blue.”

Makes about 2½ cups of sauce.

Combine hot sauce and blue cheese in a large saucepan and heat over medium-low heat, stirring frequently until all the blue cheese has melted.

Enjoy as a glaze on chicken wings, roast cauliflower or anything else you think would be tasty with buffalo sauce.

Preheat oven to 425º and prepare a large cookie sheet with parchment paper.

In a small bowl, add garlic powder, cornstarch/arrowroot, salt and pepper, then mix.

In a large bowl, add cauliflower florets and sprinkle powder mixture over top a bit at a time, tossing each time to coat. Once coated, drizzle with olive oil and toss once again.

Spread coated florets in a single layer onto prepared baking sheet. Roast in oven for 15 minutes on a lower rack, then flip/toss and return to oven for an additional 15–20 minutes or until they’re softened with brown, crispy edges.

Remove from oven and allow to cool slightly. Toss cauliflower back into a large bowl and drizzle hot sauce over top one tablespoon at a time until lightly coated and to your taste.

Arrange florets back on tray and bake for 5 additional minutes. Allow to cool slightly and enjoy warm.

This bold and flavorful dish can be dialed up or down depending on your heat tolerance. Enjoy over chips, in a taco, over a salad or layered into a quesadilla.

Add onion and tomatillos to a large pot, cover with water (just until covered) and bring to a boil. Then strain.

Heat oil in a pot. Season chicken with salt and pepper, then add to hot pot, browning on both sides. Remove chicken and excess oil from pot.

Add tomatoes and chicken pieces back into pot, cover with blended tinga sauce and bring to a simmer. Cover pot and put in oven. Check chicken after 2.5 hours (it should shred easily with a fork). Shred all the chicken into a bowl, taking care to remove any bones or grizzly bits. Add back into pot with sauce.

Serve on tacos, salad or on rice with lime wedge and garnish with cilantro.