Want to know more about it? 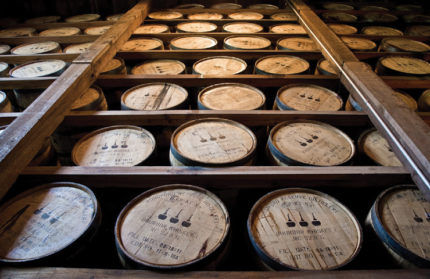 As the only true native American spirit, bourbon is enjoying a boom in popularity. Pennsylvania’s Fine Wine and Good Spirits expert, Jane Merritt, says the surge started two to three years ago, citing bourbon’s approachability and sweeter taste (it’s made from corn, the sweetest grain). Craft distilling, the resurgence of cocktails, and interest of both younger and female drinkers—who are less fond of smoky, peaty scotch—have all added to its growing fame.

So what is it about bourbon—this barrel-aged, corn-based, distilled spirit beloved by Southerners—that makes it America’s number one exported spirit (about two-thirds of total exports, amounting to $1 billion)? It’s also the number two choice in Pennsylvania—after vodka and before flavored vodka. In fact, some high-end bourbon is so popular here that there’s a lottery when the famed Pappy Van Winkle is released in the fall.

Made in the USA

The short course: All bourbon is whiskey, but not all whiskey is bourbon. There’s Tennessee whiskey, Canadian whiskey and rye, plus Irish whiskey and Scotch whisky (without an e), to name a few popular styles.

And bourbon whiskey is regulated by U.S. law. These regulations arose, in part, because distillers had adulterated, diluted and tampered with their whiskies.

By federal regulation, bourbon made for the U.S. market must be: 1) made in the U.S., 2) made from at least 51% corn, 3) aged in new, charred oak barrels, and 4) distilled to no more than 160 proof, placed in the barrel at no more than 125 proof, and bottled at 80 proof or more. (If you check the Code of Federal Regulations, please do so while sipping some bourbon.)

The regulations produce some interesting consequences. Although any state can produce bourbon, 95% is made in Kentucky. And while bourbon must have at least 51% corn, most distillers use 67 to 75% corn for a sweeter taste. The remainder of the mash can be other grains, though most are a mix of rye (richer and spicier than corn), wheat and even barley.

Bourbon must be aged in new, charred oak barrels, so the old barrels have found many uses—aging scotch and tequila, fermenting beer, storing coffee, tobacco and maple syrup. Some sources say the used 53-gallon barrels trap three to five gallons of bourbon in the wood, adding extra flavor to the new contents. Ah, the benefits of being green!

Finally, you’ll note there’s no minimum time required for aging. And there’s no requirement that bourbon older than four years have an age printed on the label. Any age you see is the age of the youngest bourbon in the mix. And to oversimplify grandly, the warmer climate of Kentucky, as compared with Scotland, is a reason bourbon ages quickly.

How to Enjoy Bourbon

Decide if you’re going to try straight bourbon—from a single batch, aged two years (unlike scotch, there’s not much blended bourbon)—or cask-strength bourbon, also known as barrel-proof bourbon, which is undiluted and can range up to 124 proof. Other choices include single barrel or small batch bourbon, the later made from a small number of select barrels, not just one.

Consider cocktails. You may want to start your bourbon exploration with the classics—a Manhattan (sweet vermouth, bitters, straight up with a maraschino cherry), Old Fashioned (simple syrup, bitters, on ice with orange wedge), or Mint Julep (simple syrup, crushed mint, over crushed ice in a silver cup). That should cover the basics.

For sipping bourbon, our expert Jane Merritt recommends you cool the dark liquor and add a drop of spring water (I’d hoped she’d say branch water). The cooling creates a chemical change that enhances the flavors, and Merritt is a fan of liquor stones to cool and not dilute the precious elixir. She recommends trying a variety of styles and price points to experience different tastes and see what appeals to you. And, perhaps, your friends.

If you’re looking for a bourbon guide, try Fred Minnick, Wall Street Journal writer and author of Bourbon Curious: A SimpleTasting Guide for the Savvy Drinker. Minnick covers about 50 bourbons and breaks down the flavors into four categories—grain, caramel, cinnamon and nutmeg—to guide your tasting. In our tastings, we also noted vanilla, toffee and smoky notes.

Or you can sample bourbon in your cooking. It’s great in desserts (pecan pie, bourbon balls), in BBQ sauces, and cooking glazed ham or pork loin. Your southern friends can likely share family recipes.

February is a great month for exploring bourbon. Especially on that extra day. 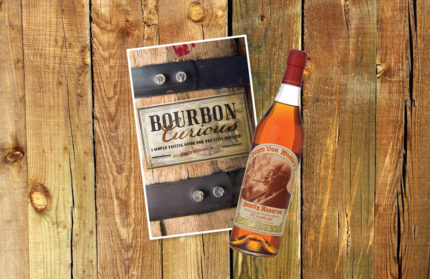 The first fun fact is that America’s Test Kitchen developed a three-ingredient hack to instantly “age” cheap bourbon. Check our website for the secret process.

Here’s some material for you to drop into your bourbon tasting conversations.

How to Age Cheao Bourbon — from Kitchen Hacks

This trick has been bouncing around the Internet since last fall, brought to you by those scientists in the kitchen from America’s Test Kitchen.

In their new book, Kitchen Hacks: How Clever Cooks Get Things Done, the chefs and testers of America’s Test Kitchen show you how to do more than a thousand tricks to make your life easier in the kitchen—from slicing pizza to frying bacon—so we were happy they turned their attention to making cheap bourbon taste better.

Here’s how they did it.

Mix the following ingredients into a 750-milliliter bottle of your favorite cheap bourbon and shake. The folks at America’s Test Kitchen used $15 bottles of bourbon and tested those against a $50 bottle as a benchmark.

They tested various versions of this formula until achieving the closest match to the good stuff. Their rationale: “Vanilla extract provided vanillin (a flavor compound found in oak), liquid smoke added earthy depth, and dry sherry (which undergoes at least three years of oxidative aging) contributed many of the aromas and flavors associated with well-aged bourbon.”

So does it work? You be the judge. Most folks the concoction added a more complex flavor profile to the cheap stuff. But it wasn’t enough to quite convert that burn into the smooth finish of the more expensive bottles. Still, it’s a quick and easy hack that helps a cheap bottle taste better. And that’s worth something.

Tagged under: Bourbon
back to top