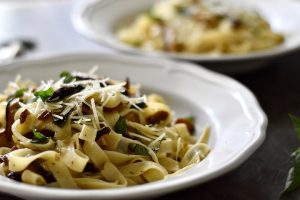 While many of us drop a pint or two of baby bellas into our grocery basket each week, it takes a more adventurous cook to grab a meaty hunk of hen of the woods or a shaggy mass of lion’s mane mushrooms.

Southeastern PA has long been regarded as a mushroom mecca, producing about half of all mushrooms consumed in the U.S. annually. The vast majority of this volume is made up of mainstream varieties, which benefit from longer staying power and a steady demand. Complementing this behemoth of a mushroom industry is a smaller artisan community of growers and foragers who are bringing unique and delicate varieties of fungi to our local markets.

One such grower is Norman Fetter, owner of Woodland Jewel Mushrooms in Spring City, PA. Norman found his way into this business through genuine curiosity. Growing up in the woods of Chester County, he was fascinated by the way mushrooms appeared, seemingly overnight. “You can almost watch them grow,” he says with wonder.

When Norman became a vegetarian in his teen years, his interest intensified. It wasn’t until he finally moved out of the city that he was finally able to scale his hobby into a full-time way of life.

He knew he could never compete with the large-scale manufactures of Kennett Square, so he set his sights on the specialty market, and never looked back.

Today, Woodland Jewel grows all kinds of gourmet mushrooms including golden/silver oyster, shiitake, lion’s mane, royal trumpets and pioppini, and sells them fresh at farmers markets, food co-ops and wholesale to restaurants. He also sells medicinal extracts and grow-your-own kits online. The kits are a fun kitchen science project that many embraced during the pandemic. “When restaurant demand was down, the kits actually kept us afloat,” he says.

Chefs have always coveted exotic mushrooms, citing their unparalleled umami/woodsy flavor and unique texture, but lately Norman says he’s seen a dramatic increase in demand from home cooks as well. “I’ve definitely seen more interest among the general public,’’ he says. He laughs remembering a time over the summer when he sold out of lion’s mane every week at market because a well-known TikTok influencer, Tabitha Brown, shared her crabless cake recipe with the world.

Even as home chefs begin to embrace and seek out these interesting ingredients, Norman still acknowledges that seeing something that more resembles a sea monster than a vegetable on a table can be intimidating. He encourages folks to keep an open mind and palate and start simply.

“If you are trying a new mushroom, just bring it home and saute it with butter or olive oil. That way you can really taste the flavor and see what you’re working with.”

We’ve gathered a list of tips and recipes to help dispel the mystique of mushrooms and guide you towards an exciting new culinary adventure.